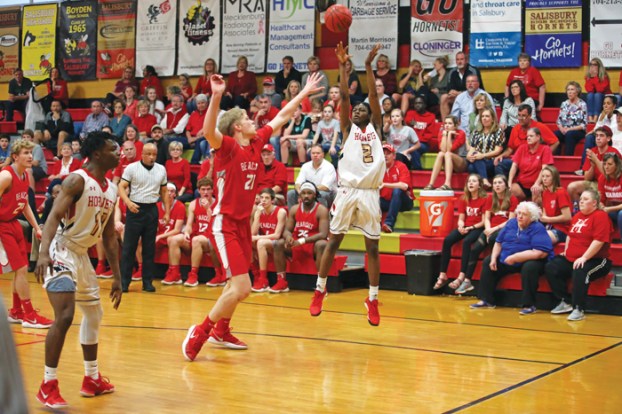 SALISBURY — Zay Kesler scored a career-high 26 points and led Salisbury to a 74-72 double-overtime win against Ledford on Tuesday in the SHS gym.

The Central Carolina Conference game was tied at 62-all after regulation. Kesler made free throws to help the Hornets get to overtime, and he also made key free throws late in the contest.

“It was tight and we fumbled it around some, but Zay played a tremendous game,” Salisbury coach Bryan Withers said. “We also got big performances as far as rebounding and defense from Lawon Blackwell, Kevin Chawlk and Raheim Walker.”

“Ledford is a very good team, excellent at sharing the ball,” Withers said. “We had to do some good things to beat them. We know we can put points on the board, but our defense isn’t where we want it to be yet.”

Salisbury plays at Central Davidson in another league game on Thursday.

MOUNT ULLA — West Rowan’s winless boys pushed A.L. Brown’s undefeated club on Tuesday in the West gym, but the Wonders walked away with a 58-50 victory.

Amare Haynie carried most of the load for the Wonders and scored 22.

It was an interesting cat-and-mouse matchup between coaches Mike Gurley (West) and Shelwyn Klutz (A.L. Brown), old friends who took over at their respective schools prior to the 1997-98 season.

With a small lead, A.L. Brown held the ball for much of the fourth quarter.

West controlled the second quarter and led 34-30 at the half, but the Wonders had a strong third quarter, grabbed the lead and kept it.

The Cougars had lost to the Vikings early in the season, 75-71, but Carson (3-6) played that one without Cole Perry.

Perry scored 23 in the rematch.

Carson also got a season-high 13 from Mark Spry, who made three 3-pointers, and 13 from EJ Clark.

“We had more continuity tonight than we’ve had,” Carson coach Brian Perry said. “Guys are learning to play together the right way, and this was the best 32 minutes we’ve put together so far. Shots were going in, and when that happens, it’s easier to do all the other things.”

Carson was down by a point at halftime but took charge with a big third quarter.

“We’ve had a couple of bad ones this year, but we’ve kept working,” Coach Perry said. “I was proud of how we played tonight.”

Christian Cornish and Nasim Fuller scored 13 each for the Vikings (2-6).

By David Shaw sports@salisburypost.com MOUNT ULLA — John Brown and the West Rowan wrestling team must have been double-parked on... read more