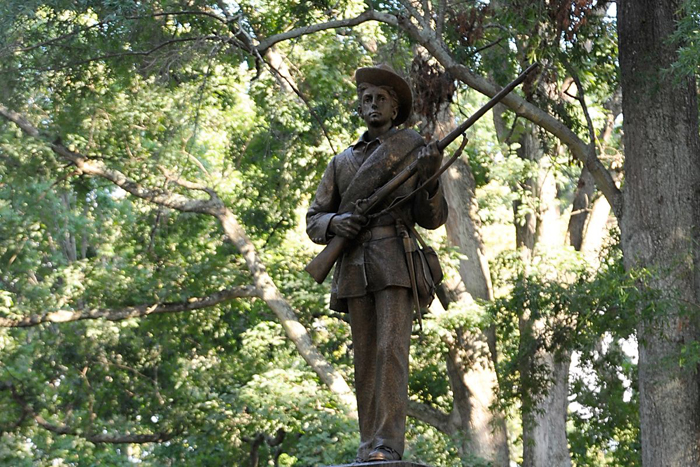 After the statue was torn down by protesters, university leaders had to figure out what to do next. Opponents of the statue want to see it relocated to the local landfill, or at least to a Civil War historic site. Supporters want Silent Sam returned to his campus pedestal with the protesters thrown in jail.

So Chancellor Carol Folt and university trustees sought a compromise, hoping to create middle ground where none exists. They failed and provoked national ridicule with a proposal to spend $5.3 million on a new campus history center to house the controversial statue.

Statue opponents called the plan a “shrine to white supremacy.” Conservatives, including UNC Board of Governors chairman Harry Smith, objected to the cost, which includes security measures to protect Silent Sam as if he were the crown jewels of UNC.

There are better ways to spend $5.3 million at UNC. You could cover scholarships for nearly 600 in-state students for a year. You could buy 900,000 of those foam fingers for UNC sports fans to waive around. Or you could cover the football coach’s salary for about a year and a half.

UNC leaders admit that they’d rather move Silent Sam off campus, but their hands were tied by a 2015 state law that says historical monuments, if moved, “shall be relocated to a site of similar prominence, honor, visibility, availability … within the boundaries of the jurisdiction from which it was relocated.”

The state legislature has the power to make an exception to that law, so it’s telling that the university didn’t think it was worthwhile to even ask. A bill filed by legislative Democrats earlier this year to move the statue didn’t even get a hearing.

The Silent Sam conundrum could be solved quickly if the legislature simply passed a bill to move the statue to a state-owned Civil War historical site — perhaps the Bentonville Battlefield site in Johnston County or Bennett Place, the Durham County site where Confederate Gen. Joseph E. Johnston surrendered.

I suspect the expensive history center idea was a stalling tactic to put pressure on the legislature, which would have been responsible for finding the $5 million in the state budget. Without funding, the project could get delayed indefinitely as Silent Sam remains in storage and protests and news coverage die down.

But on Friday, the UNC System’s Board of Governors voted to scrap the history center plan and start over. It’s forming a new committee to develop a new recommendation by March 15. The delay will keep the issue in the headlines and ensure that more people assume Silent Sam must be UNC’s official mascot.

If they’re determined to keep Silent Sam on campus, I have a few modest proposals for the Board of Governors.

If UNC wants Silent Sam in a “prominent” but not highly visible spot, why not install him in the room where the Board of Governors meets? The board could solve two problems by hiring Silent Sam to replace UNC System President Margaret Spellings.

He wouldn’t need a hefty salary, and he’d go along with any idea board members might have, because he’s silent. “Can we make a rule that all professors have to be registered Republicans?” one of the GOP board members might ask their new president. Sam probably wouldn’t object.

Or if Silent Sam must return to his old spot, the state law doesn’t appear to prevent UNC from making upgrades. You might be able to get away with melting down parts of the statue and having it sculpted to depict someone else.

Michael Jordan, Dean Smith and Andy Griffith would all be solid choices to replace Silent Sam. And I bet you could do it for less than $5.3 million.