Thanks to 80-year-old photo, Pernelle Shaw reconnects with a little girl from Maupin Avenue 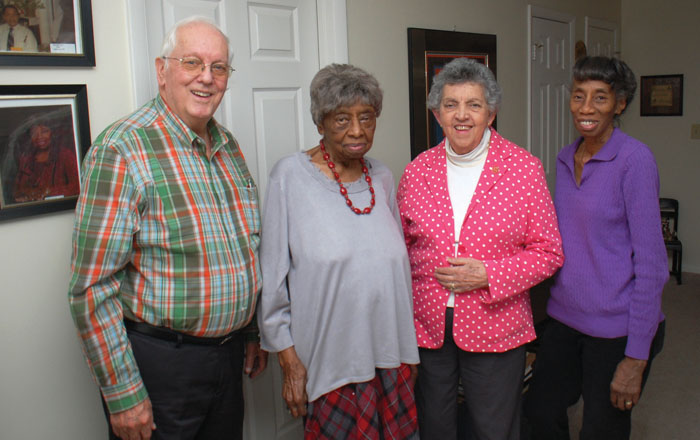 SALISBURY — The carload of four friends left Trinity Oaks at 7:30 on the rainy, 35-degree morning of Nov. 15. They were on a Virginia-bound mission, and 99-year-old Pernelle Shaw, one of the passengers, was at the heart of it.

After 80 years, Pernelle was trying to reconnect with someone she knew only as a baby and toddler — Sandra Burke Coleman. An almost four-hour drive lay ahead.

As a teenager attending J.C. Price High School in Salisbury, Pernelle Taggart baby-sat and did some domestic work for Fred and Mildred Burke on Maupin Avenue. Price High Principal L.H. Hall had recommended Pernelle for the job.

Sandra was the Burkes’ only child, a little girl who developed a strong attachment to Pernelle, making 50 cents a day to watch Sandra (and sometimes Johnny Goodman).

The baby-sitter had a knack for getting the always-busy Sandra to take a nap. The girl wanted to play all the time and constantly be with Pernelle to the point where Mildred Burke had to say, “Sandra, you stop following Pernelle around!”

When it came time for the girl’s snooze, Pernelle would pick up the little girl, exaggerate a yawn and close her eyes, “and the next thing I know, she was asleep,” Pernelle says.

Pernelle eventually left the Burkes for other domestic work with Dr. Benjamin Whitehead McKenzie and his wife. The physician also made Pernelle his office assistant — duties that would lead to nursing school and Pernelle’s highly successful career in that field, mostly in Chicago.

Sandra’s father died when she was 8. leaving her mother, a teacher at Wiley School, to raise her alone. Sandra says she had plenty of children to play with. On Maupin Avenue alone, there were 21 kids.

She built a long career in teaching, retired in 2004 and has served on her local school board for 10 years, including five as chairman. She also stays involved with her Methodist church, garden club, bridge and as a hospice volunteer.

Sandra and her late husband, Pete, had three children, nine grandchildren and a great-grandchild.

The little girl on Maupin Avenue is now 81.

Pernelle and Sandra first connected two years ago by correspondence, thanks to Phares Sechler in China Grove. In 2015, Sechler read a Salisbury Post feature story on Pernelle Shaw, who had moved back to Salisbury in 2008.

The newspaper article, which documented some of Shaw’s trailblazing accomplishments in the medical profession, included an old photograph Pernelle had kept of her holding a young girl outside the Maupin Avenue house.

Sechler knew the infant in that photo to be Sandra Burke Coleman, her sister-in-law. Sandra also was the niece of the late Billy Burke, who everyone in Salisbury knew for his mastery at bridge and piano-playing skills.

Sandra hasn’t been back in Salisbury since Billy Burke’s funeral.

Sechler met with Pernelle and provided her with Sandra’s address in Virginia. The women wrote to each other in the spring of 2016, with Pernelle sending off a dispatch first.

“I knew the name immediately,” Sandra told Pernelle in her first reply, “for Mother had spoken your name.”

Pernelle recalled the talk she had with Sechler after the newspaper article.

“During our conversation,” Pernelle told Sandra, “we thought that one day you and I should try to connect. … We are blessed to have the opportunity to come together, if no more than to just have fun and chit-chat.”

Not long after Pernelle had first written Sandra and spoken of maybe meeting in person someday, Pernelle suffered a stroke. She spent weeks in the rehabilitation section of Trinity Oaks before being able to return to her second-floor apartment.

Fannie Butler has become her caregiver during the day, and two of Pernelle’s good Trinity Oaks friends, Mary Shuping Picking and the Rev. Gene Bruce, check in with her regularly or often eat with her in the dining hall.

Bruce and Shaw moved into Trinity Oaks about the same time 10-and-a-half years ago, “and we became friends right off the bat,” says Bruce, who for several years was known as “the singing chaplain” at the Trinity Oaks Rehab Center.

Bruce was constantly roaming down the halls and stopping in rooms for visits, singing much of the way. Though he has tried to retire several times, the 76-year-old Bruce still serves as pastor for Amity Lutheran Church in Cleveland.

It eventually was Bruce’s idea for the road trip to see Sandra Coleman, and Pernelle was all in. Bruce contacted Sandra with a couple possible dates. Nov. 15 — the Thursday a week before Thanksgiving — won out.

Bruce drove his Toyota Camry. Gibson served as his passenger-seat navigator, and Picking and Pernelle sat in the back. Picking also is a retired nurse, and she thought she could be of assistance, if needed.

The rainy drive went without a hitch. When the foursome arrived at Sandra’s house in Colonial Heights, Bruce went to the door, and he and Sandra quickly decided it might be best to drive directly to the Italian restaurant, Vincenzo’s.

A private room was waiting.

There was great rejoicing when Pernelle and Sandra were able to embrace each other at the restaurant. “It was a jubilant time,” Pernelle says.

Sandra asks, how often does something like this happen?

“We were pretty excited,” she says, “because I hadn’t seen her in 79 or 80 years. I thought she was really delightful. My son really enjoyed it. He has been telling everyone about it.”

They loved the stories Pernelle could tell of growing up in the segregated South.

Friends and several other family members accompanied Sandra to the restaurant and the whole lunch party totaled 11.

Sandra enjoys what 99-year-old Pernelle tells people when they ask how she’s doing.

Pernelle and Sandra — with help from everyone else — spent three hours reminiscing and catching up on each other’s lives.

“It was rewarding for us, I’m glad we did it, ” Bruce says, chuckling that the Salisbury quartet spent three hours with Sandra and close to eight hours in the car that day.

Picking sums it up this way: “Love makes the world go round.”

The group drove back to Salisbury from Vincenzo’s and made it to Trinity Oaks by 6:45 p.m., just in time for dinner.

“Believe it or not, I had a good driver,” Pernelle says, shooting a glance at Bruce. “He put the pedal to the metal.”

Pernelle’s husband of 48 years, Harold Shaw, died in 2008. The couple never had children. She was assistant director of surgical nursing at Cook County Hospital in Chicago by the time she retired in 1980.

Not bad for a woman whose grandparents were born into slavery.

Pernelle says the trip to Colonial Heights was important to her for three reasons: First was the history aspect and reconnecting with one part of her past.

The second reason was simple curiosity. “I wanted to know what happened with my baby (Sandra),” Pernelle says.

And the third reason was selfish, Pernelle acknowledges. She wanted to prove to herself she could still make that kind of trip.