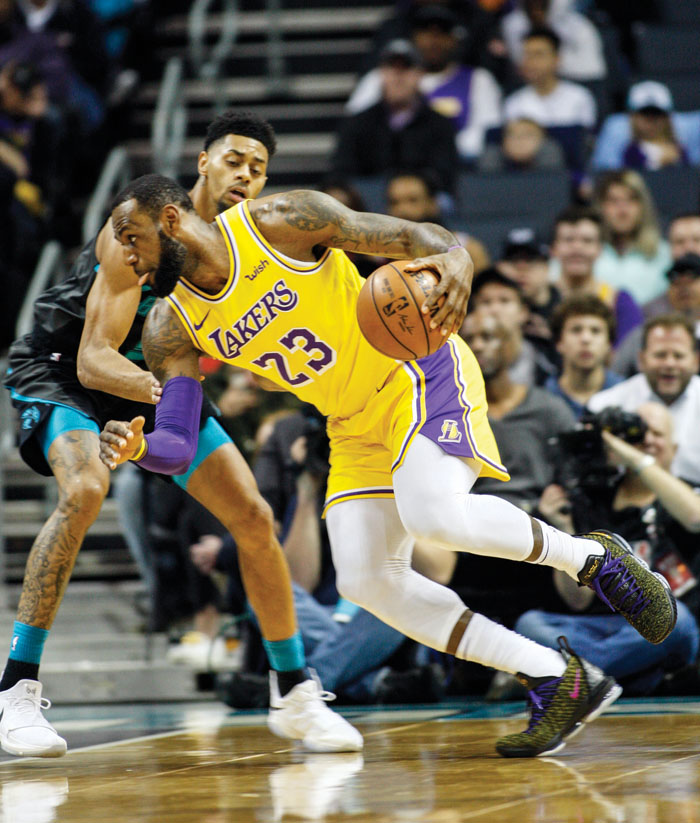 CHARLOTTE (AP) — LeBron James and Lonzo Ball gave the Lakers multiple triple-doubles in a game for just the second time, and Los Angeles routed the Charlotte Hornets 128-100 on Saturday night for its third win in four games.

James had 24 points, 12 rebounds and 11 assists, while Ball had 16 points, 10 rebounds and 10 assists. Magic Johnson and Kareem Abdul-Jabbar are the only other Lakers to accomplish that feat in the same game, doing so on Jan. 22, 1982.

James continued his dominance over Charlotte, improving to 27-1 in his last 28 games.

He was unstoppable throughout on penetration, helping the Lakers outscore the Hornets 40-17 in the third quarter and build a 30-point lead with his second triple-double of the season and 75th of his career. He did not play in the fourth quarter with the game out of reach.

Ball had his third career triple-double and finished 7 of 11 from the field.

JaVale McGee had 19 points and six rebounds as the Lakers handed the Hornets their worst defeat of the season.

Miles Bridges had a career-high 17 points for the Hornets.

Kemba Walker was held to a season-low four points on 2-of-13 shooting from the field. Walker is in the midst of a major shooting slump, making just 32.3 percent (34 of 105) of his shots from the field in the last six games.

The crowd of 19,461 fans was the largest ever to see an NBA game at the Spectrum Center.

Lakers: Lance Stephenson was assessed a technical foul in the third quarter for playing the air guitar and taunting Miles Bridges after Stephenson made a 3-pointer.

Hornets: Sideline analyst Stephanie Ready worked her last game for the Hornets and the team did a nice tribute to her on the scoreboard during the first half. Ready is moving on to take a position outside the organization. … Were outrebounded 52-28.