Clyde, Time Was: There’s a Santa in all of us 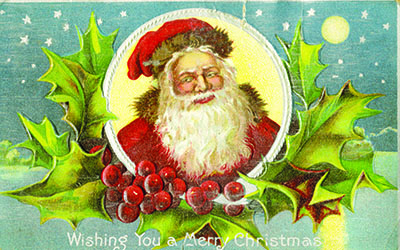 Time was, we were gullible. We believed in Santa Claus, St. Nicholas, also known as D. Sinterklaas, the patron saint, although we were skeptical about landing on the moon. When did we begin to doubt? We watched Mr. Green Jeans, Captain Kangaroo and Clarabell on TV, read “Hansel and Gretel” and went to church every Sunday. We did not question our beliefs and no one else did.

Naivete ruled our days and nights when we prayed on our knees for help which cometh from God. The Nicene Creed approved by the council of Nicaea in Anno Domini 325 told us so.

The first church in Salisbury was not built until 1768, now where the old Lutheran graveyard stands. By 1910 there were 47 clergymen in the city directory to save our souls.

In the theater, we pretended we were really in that moment. In art, we saw ourselves in that painting; in music, we felt that we had been there before and heard that same melody. We accepted trustfully, held firm convictions as to reality and goodness and by the definition from the Middle English, beleven, allowed our mind to consider what is true and honest.

“And how long will it be ore they believe me, for all the signs which I have shewn among them?” — Numbers 14:11:

We knew fairy tales could come true if you’re young at heart and a little mystical magic, like Glenn’s slight of hand prestidigitation, and we were hooked, line and sinker. As the tacky, made-in-China plastic sign says, Believe.

But what to believe? There are way too many choices and with our laissez-faire crowd, there is nobody to tell you: “You can’t believe in that; it’s stupid.” There are some 847 words in the dictionary that end in “ism,” with 140 in common usage. Believe it or not. Divisions of isms include the process (criticism or plagiarism), state or condition (barbarianism), abnormal state (mongolism), doctrine or theory (Buddhism), adherence (stoicism), characteristic (colloquialism). How many can you name and which fit your style? No wonder we don’t know what to believe anymore.

Some people invent their own ism to live by. Some too weird, like hedonism, nihilism, anarchism. Yankees are too busy being the expert and don’t believe anybody else anyhow.

What can kids believe in, with the role models we see? High school art in a recent show was all cynical, morbid and gothic. What do young folks have to make them want to create work that inspires optimism?

Looking into the eyes of ARC children, with their extra 21st chromosome, makes you wonder how much they believe. They know they trust you and they believe you will care for them. Ableism and volunteerism, thank you Rachel.

For every drop of rain that falls, somebody out there somewhere steps up to show you how to be a part of our own village, that we hold dear. In return, you give the gift of sharing what you have.

Giving is new to those who see old beliefs die hard. Remember, Santa is watching you. Newfangled isms may be just a blip on the screen in our abandoned world, but they can catch on, too soon for the likes of us old-timers who still don’t live the WiFi life. Hopefully, the test of time will prove itself. “But a lying tongue is but for a moment.” Prov. 12:19

Meanwhile, speak up, proclaim your affirmation. Pledge your talents and time, go kneel prie-dieu at St. Luke’s Episcopal, wear a badge or be labeled for what you believe.

“To drift with every passion til my soul is a stringed lute on which all winds can play. Is it for this that I have given away mine ancient wisdom, and austere control?” Oscar Wilde (1854-1900).

Don’t let the unbelievable news, gossip or old wives’ tales get in the way of the plain truth.

Yo, Tyrone, there is a real Santa, even now more than ever. Just as sure as you continue to want to know what’s real and what comes your way is well-earned. And with it, you can find in your heart what this weary world has in store for you, if you slow down and look.

There is a Santa in all of us. Some jollier, some richer, some fatter, some different creeds or color, some in costume. Go find him. Put on your ruby red slippers, tap your heels together, and you’re there. If we could all just, only believe.