Browns hold off Denver, 17-16, to stay in the playoff hunt 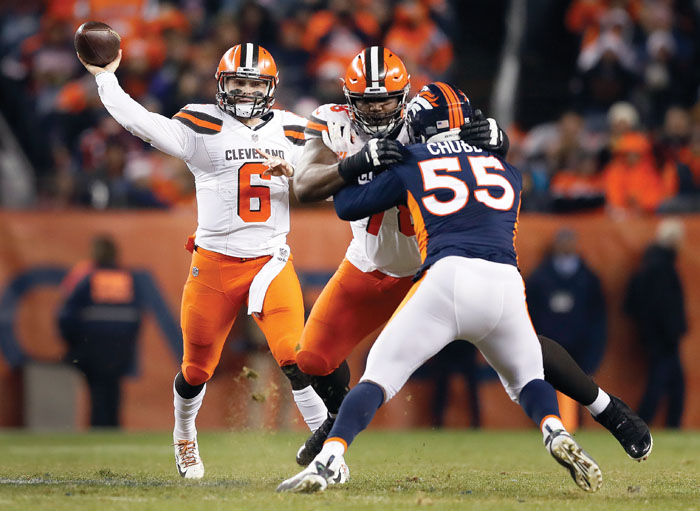 Mayfield’s 2-yard TD toss to Antonio Calloway with just under 12 minutes left provided the winning margin for the Browns (6-7-1). They snapped an 11-game losing streak to the Broncos (6-8).

Improving to 3-28 on the road over the last four seasons, the Browns still have a shot at their first winning season since 2007 and even their first playoff berth since 2002 thanks to their first win over Denver since 1990.

Calloway’s touchdown made it 17-13 and came with safety Justin Simmons in coverage because the Broncos were down five cornerbacks.

The Broncos responded with a 13-play drive that ate up more than seven minutes, but after Phillip Lindsay was stuffed for no gain on third-and-1 from the Cleveland 6, coach Vance Joseph sent in kicker Brandon McManus for a field goal instead of going for it.

“I wanted points there,” Joseph explained. “We had about 4:35 left. We had one timeout and the 2-minute warning. I trust our defense to get a stop there.”

It didn’t happen, at least not right away.

Chubb reeled off a 40-yard run on the first play, and on fourth-and-1 from the Denver 10, Cleveland interim coach Gregg Williams went for it — and Chubb was dropped for a 2-yard loss by Adam Gotsis.

The Broncos got the ball back at their 13 with 1:49 remaining and reached the 50-yard line with 52 seconds left. But a spike, two incompletions and a sack by Peppers all but ended Denver’s playoff hopes. They could officially be eliminated with Sunday’s slate of games.

The Broncos began the night with cornerbacks Chris Harris Jr. and Isaac Yiadom sidelined and they lost Brendan Langley to a concussion in the first half and newly-signed Jamar Taylor to an ejection in the second half on the same play Bradley Roby went out with a laceration in his mouth. Roby later returned.

With safety Dymonte Thomas, who had his first career interception in the first half, subbing at cornerback, Von Miller broke Simon Fletcher’s franchise record of 103½ sacks, including playoffs.

Denver’s depleted defense, however, was forced right back out onto the field when Keenum’s first-down heave was easily picked off by T.J. Carrie at the Broncos 48, after just eight seconds had ticked off the game clock.

Six plays later, Mayfield put the Browns ahead for good.

The teams were tied at 10 after a mistake-filled first half in which both quarterbacks were thwarted by interceptions in or near the end zone.

Keenum, who was implored by his coach during the week to let it rip and quit worrying about being intercepted, was picked off for the first time since October when Peppers came down with his 29-yard floater to Courtland Sutton in the end zone.

Mayfield had the Browns in field goal range at the Denver 30 in the final minute before halftime when Thomas recorded his first career interception at the 2 on a throw to Jarvis Landry.

Langley went out in the first half and Roby in the second. Combined with Taylor’s ejection — he was signed after Harris fractured his right fibula two weeks ago — and the Broncos were left scrambling in their secondary.

The AFC North leaders downgraded Conner from questionable to doubtful for Sunday’s game against New England. Conner, who is sixth in the NFL with 909 yards rushing, skipped last week’s game against Oakland and was limited in practice on Friday. Jaylen Samuels and Stevan Ridley will fill in for Conner if he’s unable to go.

METAIRIE, La. (AP) — The New Orleans Saints have ruled out left tackle Terron Armstead for Monday night’s game at Carolina because of a chest injury.

Armstead is the Saints’ second-highest paid offensive player after Drew Brees but has missed the past four games. He has yet to play since returning to practice on a limited basis nearly two weeks ago.

The Saints already have clinched the NFC South title and now are vying for the NFC’s top seed.

New Orleans has won three of the four games Armstead has missed, with veteran Jermon Bushrod filling in. The lone loss in that span was a 13-10 defeat at Dallas two games ago.

NEW YORK (AP) — Dallas Cowboys star running Ezekiel Elliott has been fined $26,739 for unnecessary roughness for leading with his helmet and making contact with the Eagles’ Corey Graham in a Week 14 game.

The fine, announced by the NFL on Saturday, makes Elliott the first offensive player docked money under the league’s new helmet rule. Elliott’s act came in the fourth quarter and was replayed several times on TV.

It was the second time in four games Elliott was fined, though hardly for a similar offense the last time. He was docked $13,369 for unsportsmanlike conduct when he put money into the Salvation Army kettle behind the end zone after scoring a touchdown against Washington.

The week’s biggest fine was given to Atlanta linebacker Deion Jones, $33,425 for fighting. Jones was involved in a skirmish after a hit on Packers quarterback Aaron Rodgers at Green Bay.

Also fined from that game was Packers center Corey Linsley, $10,026 for unnecessary roughness.

Jets cornerback Buster Skrine got a $20,054 fine for his hit on Buffalo quarterback Josh Allen, and teammate Henry Anderson was fined $10,026 for unnecessary roughness. Bills guard Dion Dawkins was docked $20,054 for a chop block.

Tennessee tackle Taylor Lewan got hit for $13,369 for unnecessary roughness. Fined $10,026 for the same offense were Oakland’s Johnathan Hankins and Cleveland’s Jermaine Whitehead. Washington’s Josh Doctson got  a  $10,026 fine for unsportsmanlike conduct.