At 120 years, Elizabeth Maxwell Steele DAR is second oldest in the state 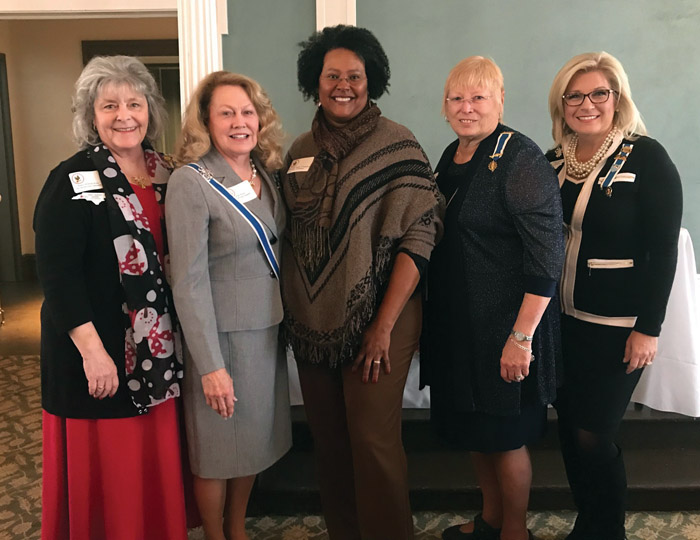 So it’s more than fitting the Daughters of the American Revolution chapter in Rowan County is named for her and that it is the second oldest DAR chapter in the state behind Mecklenburg County.

Members of the Elizabeth Maxwell Steele DAR Chapter celebrated the 120th anniversary of the chapter charter with a Christmas tea Wednesday at the Rowan Museum.

State Regent Carole Weiss was on hand, and she assisted with the induction of new members. The Recorder Ensemble accompanied the tea, held in the Messinger Room of the museum.

Salisbury Mayor Al Heggins also gave a greeting, and chapter registrar Trudy Hall reviewed some of the history behind both Steele and the chapter.

“Through our continued service to the community and veterans, our never failing support to education and our love of preserving history, we will continue to stand strong as our patriot ancestor Elizabeth Maxwell Steele did as we strive to carry on the goals of the DAR,” Hall said.

Steele owned a tavern not too far from today’s museum at 202 N. Main St.

When Continental Army Gen. Nathanael Greene and his troops arrived in Salisbury in 1781 and Greene made his way to Steele’s tavern, she overheard his concerns about his tired and famished troops.

Steele handed Greene two bags of gold and silver coins, saying, “Take these, for you will want them and I can do without them.”

In response, Greene walked to one of the tavern walls and removed a portrait of King George III. On the back of the portrait, he wrote, “Oh, George, hide they face and mourne.”

He returned the portrait to its spot with the king’s face turned to the wall.

“This portrait and Queen Charlotte’s portrait hang today in the museum at Thyatira Presbyterian Church,” Hall said. “Mrs. Steele’s aid encouraged the general and enabled him to make a valiant stand at Guilford Courthouse.”

The Elizabeth Maxwell Steele DAR chapter was chartered Dec. 9, 1898. The first regent was Minnie Phifer Quinn, and the group had 12 charter members.

In 1932, the Steele chapter erected a large pink marble monument at the Thyatira Church gravesite of Elizabeth Maxwell Steele.

A bronze tablet at the museum makes note of the tavern site. The DAR has sponsored several other historical markers through its history.

Rowan Museum has an Steele DAR room on its first floor, which includes a portrait of Steele and many of the organization’s records and antiques.

It often has recognized community members through awards and given scholarships to Rowan students.