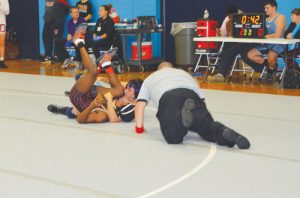 MOUNT ULLA — John Brown and the West Rowan wrestling team must have been double-parked on Saturday.

The fifth-year coach and his crew of assistants made quick work of this year’s Rowan County Wrestling Championship. The host Falcons claimed two weight class champs, totaled 184.5 team points and pocketed their second consecutive title — and did it all in a little more than four hours.

“The tournament ran fast today,” said Brown. “We kind of kept it rolling and some of the matches went fast. Some of the brackets weren’t filled, but we had a lot of decisive weight classes this year, where one guy was just better than everyone else.”

That included West juniors Mike Molenda (138) and Baiden Suddarth (195), each of whom earned first-place ribbons. The Falcons had six second-place finishers and five thirds, enough to easily outdistance runner-up East Rowan (140), Salisbury (131) and Carson (124). North Rowan (57) and South Rowan (51) rounded out the field. Salisbury sophomore Mike Lowry, who pinned two opponents and cleared the room at 132 pounds, was named the tournament’s Most Valuable Player.

“It’s just another year,” said Suddarth, a 10-3 final-round winner against Salisbury’s Tkaii Gaither. “By the time you get to your junior year, it all starts coming to you. You know what’s going on and what to expect.”

West was an early-line favorite after dominating last year’s tournament and compiling a 9-1 record in duals this season. Yet it looked at yesterday’s crowning achievement with a business-as-usual temperament.

“It’s nice for the school to win two years in a row,” said Molenda, who sat out his sophomore year. “But this generation doesn’t really look up to wrestlers. Nobody really knew about last year. I guess if we just keep winning, we’ll get recognized.”

Molenda was the No. 4 seed at 138 and pinned Carson’s Ryker Rowlan in the semifinals. In the final, he stopped Jayden Gibson of Salisbury in the first period. “I went out there and was ready to explode on a move,” he said. “That’s what happened. I got a pin in like 30 seconds.”

West’s title likely came down to a battle of the haves and have-nots. Brown was able to fill all 14 weight classes with solid wrestlers and earned team points across the board.

“A full lineup, that was a big key,” he said. “Some of the other teams, they were close to a full lineup, but may have had one or two that didn’t make weight or somebody was sick. East had more champions than us, but when you start sucking up a bunch of third places, that helps your tournament score.”

Brown believes West is formidable dual team with a chance to make noise comes February. It’s a squad that lacks headliners and still could make headlines.

“We don’t have any guys who you’d say are definite state champs,” he said. “But if things go right, a few of them could be state-placers. There’s nobody who is hands down the best, but there’s nobody you’d call weak. From bottom to top, we’ll be in every match.”

East claimed four weight-class champions, including two-time titlist Stephen Deutsch at 160. The senior improved to 15-1 when he stopped Carson’s Joshua McCurry in 4:48 for the win.

“My offense on top,” Deutsch said. “That’s how I pinned both my kids. I got into position and used moves that always work for me in practice.”

“The guys who won are very deserving,” Burris said. “They train hard in the off-season and they were rewarded. They all have things to work on, but they’re an easy group to coach.”

Lowry improved to 15-2 with a couple of pins and made off with the MVP plaque. Seeded first, he used a first-period pin against North Rowan’s Josh Loftis  to reach the finals. There he needed nearly five minutes to level Carson’s Noah Basinger for the title.

“I’m pretty happy about it,” Lowery said, afterward. “I had a slow start in the finals, but by the second and third period, my moves started working. I got into more of a groove.”

Teammate Kevion Chunn (285) notched his second title at heavyweight with a 12-2 major decision over East’s Josh Teeter. “It was a hand fight,” he said after boosting his record to 17-0. “Rake a shot and go for the pin. If it didn’t work, rinse and repeat.”

Javon White’s pin in the 106 final gave Salisbury a spit in six championship-round matches. “We’re a young team, but I expected to be in the top three,” said SHS coach Tim Pittman. He called Lowry “arguably the hardest-working kid in our room,” and added: “Three times a week he meets me at 7 o’clock in the morning. Then he goes to school, then wrestling practice and then he’s at swimming practice. That’s a full schedule.”

“Feels like I’ve accomplished something that I can pass down — to the next generation, to my friends, to anybody,” he said. “It shows that with hard work, anything can be done.”

Vega, who hopes to wrestle in college next winter, improved to 12-3 this season. “It’s my last county tournament,” he said. “I told myself to give it everything I had and have fun. I’ve competed at the highest levels, but this is still important to win.”

The county’s best wrestler did not participate. South Rowan junior Logan Lambert, a two-time county champ and defending 2A state champion at 132 pounds, sat this one out.

“He’s just taking a little time off,” said Raiders’ coach Nick Golden. “We weren’t looking for the team title today, anyway. He’ll be back in a couple of weeks.”