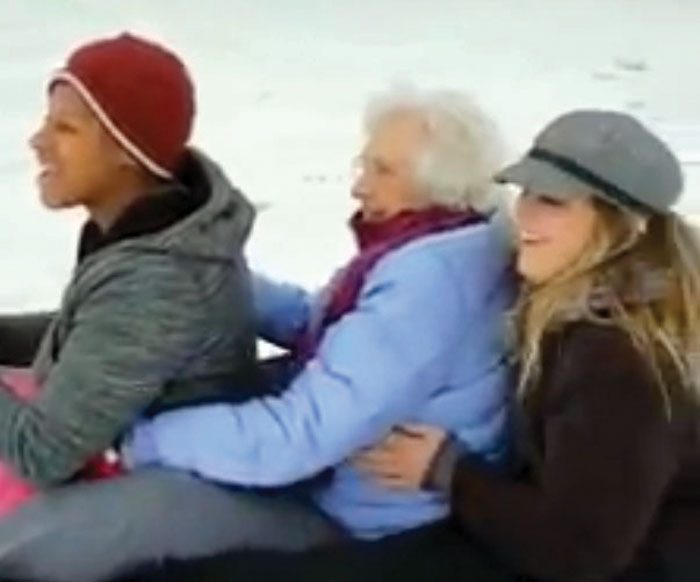 Video capture of Mary Kidd, 97, going sledding down the hill behind Trinity Oaks.

That was until this past Monday afternoon when Kidd and the Rev. Maurice Staley — on separate runs — rode air mattresses down the snowy hill behind the assisted living wing at Trinity Oaks.

This doesn’t seem like a big deal until you hear that Kidd is 97, Staley, 91.

From the bottom of the hill, staff members Brittany Ravon and Ira Evans recorded their rides and sent the short videos, which were a combined 35 seconds, over to Trinity Oaks marketing director Lorie Aldridge.

She did some editing and posted the sledding on Trinity Oaks’ Facebook page. If you are looking for the definition of something going viral, this was it.

“I think it’s everyone’s dream or hope that when they put a cute little video online somewhere, all sorts of people will come to it and share it,” Johnson said. “When it happened, we really didn’t know what to do.

“People are playing this video over and over again.”

By the end of the week, the sledding runs of Kidd and Staley had been seen, well, pretty much across the country and even as far away as Australia. They made The Weather Channel and many of the regional television stations.

Around Trinity Oaks, Staley and Kidd became stars, though it puzzled them somewhat.

“I have not seen it except on an iPhone,” Kidd said Friday.

Why does she think it became so popular?

Johnson was heartened by all the positive comments the videos received. At first, she was worried people might think it was too dangerous for 90-year-olds to be sledding, or there would be concerns they’d catch colds.

“We didn’t have any of that,” Johnson said.

Credit for the videos going viral probably should land with Johnson and her social media savvy friend, Dr. Pam Thompson at Catawba College.

About 9 p.m. Monday, Johnson and Thompson began an onslaught of messaging and sharing of the video to all the different news and entertainment outlets they could think of.

The Weather Channel picked it up off Snow Days on AMHQ.

Johnson thinks Kidd and Staley sledding down the hill generated interest for many reasons.

For one, it shows fun, kindness “and so much love in the faces of the staff,” Johnson said.

“I think we all have older people in our lives,” Johnson added, “and we want to know life doesn’t stop when they’re going into a retirement community or assisted living.”

The video of Staley in particular hit a nerve locally. Many people mentioned how he once was their pastor, or that he had baptized them or married them.

In those short videos, there also was that small dose of adventure, even risk, that maybe people liked, according to Johnson.

But for a video to go viral, you have to have something to work with,  and Johnson gave all the credit to the staff members at Trinity Oaks who made it happen.

On her ride down the hill, Kidd was sandwiched between Trinity Oaks staff members Sydney Baker in front and Chasity Kiker in back.

Staley was between Jessica Beck in front and Darlene Taylor in back.

“It was fun,” Kidd said Friday. “It was a very comfortable experience. I felt comfortable with the two people, even though I couldn’t tell you who was behind me.”

Kidd said she had only one anxious moment.

“We were going real fast, I thought,” she said, “and I wondered, what’s going to stop this thing?”

Would it be a tree down the hill or a building ahead? But her passengers, Baker and Kiker, knew what they were doing.

The air mattresses were available because they are used by staff for bad weather situations, when they decide to stay at Trinity Oaks overnight.

He puts people first, makes sure they are protected but also pushes the boundaries a bit, Mary Ann Johnson said.

“Really the best gift you can give the residents is staff who enjoy their work,” Mary Ann Johnson said. “The aides who were working that day had a blast. There’s a lot of joy in their work.”

Chasity Kiker recalled coming around a corner Monday afternoon and running into Kidd.

“What are you doing”? Kiker asked her. “Do you want to go sledding?”

“Really?” Kidd said, but before Kiker knew it, Kidd had retrieved her winter jacket and was ready to go. Staley was right there with her.

“They had a ball and really enjoyed it,” Bill Johnson said. “We had no idea it would be so popular.”