Future of law: Attorneys talk about better access and understanding 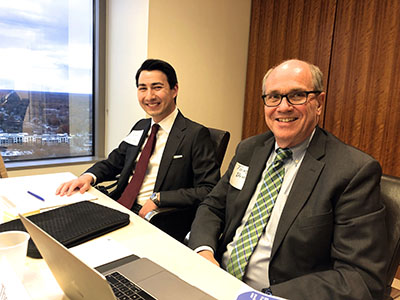 Tom Brooke, right, is chair of the Future of Law Committee of the North Carolina Bar Association. Jeff Kelly, left, serves as vice chair. Brooke and his wife, Carole, have practiced in China Grove for more than 37 years.

If you’re not a member of the upper class or middle class, how do you contact a lawyer? How do you know if you even need one?

The N.C. Bar Association’s Future of Law committee tackled the issue of access to justice during its quarterly meeting Dec. 5 in Raleigh at Smith Anderson Law Firm. Tom Brooke, a China Grove attorney, chairs the committee.

Ward explained that the group would use design thinking to determine questions which would answer how those without means could gain better access to attorneys and to the legal system.

“We want to spawn creative thinking around access to the justice gap,” he said. “We have technology to solve this problem, but what are the human problems? How can technology play a role?”

Ward said that the group would ponder such questions as “Where are access gaps?” and “How could access be improved?”

The meeting’s goal — after participants identified next steps, stakeholders, and champions — was to create a plan on which the committee could take action.

Brainstorming played a key role in getting those creative juices flowing.

“I loved law school,” Ward admitted, “but I did not feel my creativity was bolstered.”

Creativity, he explained, is another tool in the tool belt for lawyers, and design thinking can help sharpen ideas.

Design thinking, he said, relies on “divergent creativity and rapid prototyping” with the hope that participants will leave with an idea or two to execute.

First, participants identified the problems surrounding access to justice. Ward asked them not to include the solution to the problem at that point.

In asking them to think creatively, Ward asked the participants to look at a cup and offer a different use for it. Answers included, “It holds thoughts and dreams,” “It’s a cat toy,” and “It’s a meditation device.”

“The key here,” Ward said, “is that we can get quite creative if we have a beginner’s mindset.”

Such “silly answers,” Ward explained, might just be a step to get to somewhere else. “Don’t worry about saying ridiculous.”

In North Carolina, he said, some 80 percent of civil legal services go unmet. “That’s a big problem that’s worth solving.”

Together, the group discussed the problem before breaking into small groups.

“It’s hard to find a place to start with an attorney if you don’t already know someone,” said Jeffrey Kelly, the committee’s vice chair and an attorney with Shanahan McDougal in Raleigh. “If I didn’t have that advantage, I could absolutely see not knowing where to go. How do you get your questions to the right people?”

Affordability for clients is a big issue, said, Julianne Dambro, director of communities for the N.C. Bar Association. “I know how much I can afford.”

“It’s sometimes hard for me to price my services,” Brooke noted. He has practiced in downtown China Grove for more than 37 years. He and his wife, Carole, are owners of Brooke & Brooke Attorneys.

Even though attorneys have fixed hourly rates, Kelly pointed out, they do have some discretion.

“I’m in solo practice,” Brooke added, “so I can charge what I need to — within reason.”

“I think financial aspects of working with attorneys are always a problem,” said Holly Morris, communities manager for the N.C. Bar Association. She said that a friend had recently called, asking for assistance with a power of attorney for her grandparents, who live out-of-state.

“There is a misperception as to what attorneys are and how they may or may not be of assistance,” Morris said.

The number-one complaint that Dambro gets, she says, is that attorneys do not return calls.

In many cases, Morris said, the attorney wants an enduring relationship. “But how many clients want or need that?”

“I’m a small-town lawyer,” Brooke said. “I’ve got a whole group of people for whom I’m their lawyer.”

The group then turned to further defining the problem of no access to attorneys. After a flurry of sticky notes thanks to brainstorming, themes quickly emerged. Cost is a barrier. There’s no trust in the legal system. A lot of people don’t know they have a legal problem. You only call a lawyer in an emergency.

Kris Cook, an attorney with Legal Aid of North Carolina, noted the existence of “legal deserts”— much like food deserts — especially in the eastern part of the state. In such areas, he said, transportation is an issue.

The group then broke into four groups to come up with questions as Ward had requested.

Dambro pointed out that the bar association was trying to do things more online. Her group discussed the formation of a type of flow chart which would help determine whether you needed an attorney.

Still, Cook noted, “Walking through a legal problem without being present with the client is difficult. Basic concepts of law start to fall apart quickly. There are complex issues you have to define.”

By meeting’s end, the group produced these questions for the Future of Law committee:

• How might we educate and partner with trusted community leaders to help the public understand legal services?

• How might we create markets for solutions to smaller legal problems?

• How might we make licensing easier to create broader representation?

• How might we remove ethics limitations to modernize the practice of law?

• How might we remove licensure requirements to solve common consumer problems?

Brooke was pleased with the attendance and the results.

“It was a good way to get lawyers to think out of the box, and think of ways to make the practice of law more accessible and more relevant,” he said. “We made a good start down that road.”

My Turn, Ronnie Smith: Where to place flag in Bell Tower Green Park

My Turn, Alissa Redmond: With no forum, thoughts on Faith parade, symbols