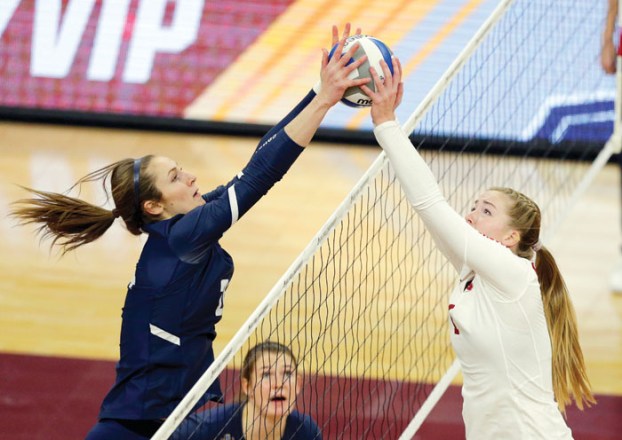 Stanford's Jenna Gray, right, and BYU's Kennedy Eschenberg vie for the ball in the first set of a semifinal match of the NCAA Div I Women's Volleyball Championships Thursday, Dec. 13, 2018, in Minneapolis. (AP Photo/Andy Clayton-King)

MINNEAPOLIS (AP) — When Stanford volleyball players said they had been waiting a year for the NCAA volleyball semifinal match, they didn’t mean a full season, even though their opponent Thursday night was the only team to beat them in 2018.

Redemption for a five-set loss at BYU in August wasn’t on their minds. What motivated the Cardinal was last year’s semifinal loss to Florida, when Stanford was the defending champion.

“This was more about a redemption match than us finding ourselves, because we felt like we just didn’t show up the first two sets last time against Florida,” Stanford coach Kevin Hambly said.

They certainly did against the Cougars.

Audriana Fitzmorris added 11 kills and nine blocks for the Cardinal (33-1), who have won 31 straight.

BYU had a 13-12 lead in the first match when Stanford reeled off 10 straight points.

“My block was amazing tonight,” Hentz said. “I was able to set up around them. And they made my job so much easier. I think our whole team did a great job of scrapping. I thought our scrappiness was key.”

Alade had seven blocks in the first match.

“Blocking has always been one of my favorite parts of volleyball,” Alade said. “It’s something (coach) works on us middles a lot. We knew … they run a fast offense. Trying to close is really, really important. More importantly than that is really pressing over on the block.”

Plummer, the reigning national player of the year, hit .300 and Fitzmorris .375 as the Cardinal had 34 kills with just seven errors and 33 blocks.  BYU had 29 kills and 32 errors.

Stanford hit .188 in the first game and got better every game while the Cougar had more errors in the first two games before hitting .125 in the third.

Roni Jones-Perry, a player of the year candidate with Plummer, had eight kills but 12 errors for BYU.

“They were a really good block, so it was tough,” Jones-Perry said. “They did a really nice job. … It wasn’t our best match offensively, you can see that in the numbers.”

“There were no surprises,” BYU coach Heather Olmstead said. “Stanford is a great team. They serve tough. They have a big block. We weren’t serving tough enough for us to get any touches, get some blocks. … We tried our best, but they took us out of our game.”

Burden of a ‘Beast’: Steelers know they must stop Gronkowski