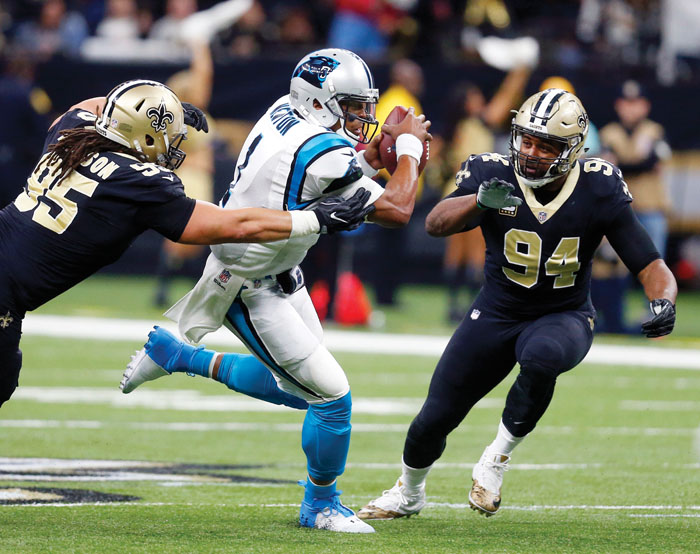 FILE - In this Jan. 7, 2018, file photo, Carolina Panthers quarterback Cam Newton (1) carries between New Orleans Saints defensive tackle Tyeler Davison (95) and defensive end Cameron Jordan (94) in the first half of an NFL football game in New Orleans. Jordan and the Saints are looking to beat the Panthers twice in the final three weeks of the season and wrap up home-field advantage in the NFC playoffs. (AP Photo/Butch Dill, File)

CHARLOTTE (AP) — Cam Newton keeps a black and yellow broom he was “gifted” by the Saints hanging in his locker, some omnipresent motivation after what happened a year ago when the Panthers met up with their NFC South rivals.

New Orleans swept Carolina, winning both regular-season games in 2017 before eliminating the Panthers from the first round of the playoffs in January with a 31-26 win at the Superdome.

The rematch is never far from Newton’s mind.

“If you need any type of boost, kind of chip on your shoulder versus (these guys) I have a constant reminder each and every day when I look in my locker,” Newton said, who will renew acquaintances Monday night with the Saints, a team he said “doesn’t like.”

Newton said the broom came from the Saints, although he wouldn’t disclose which player.

Newton also received a bottle of “Jordan” red wine this past offseason from nemesis Cam Jordan, the Saints dominant defensive end. Jordan had promised to send Newton some “juice” if the Saints swept the Panthers.

The broom remains in its plastic wrapper and Newton said he would like to stamp it “return to sender” if Carolina (6-7) can somehow manage to beat New Orleans twice in the next three weeks and sneak into the playoffs as a wild-card team. The Panthers currently trail the Vikings by a half-game in the battle for the second wild card spot, but are given only a 9 percent chance of making the postseason.

Saints defensive tackle Sheldon Rankins said: “I know about the wine, not the broom — but whoever sent the broom is a comedic genius.”

Meanwhile, the Saints (11-2) have already locked up their second straight division title and are aiming for home-field advantage throughout the NFC playoffs. The Rams are also 11-2, so there’s no room for error.

“They got the juice, but at the end of the day we are coming Monday with a cup for our own, too,” Newton said.

“Listen, they’re a prideful group,” Saints quarterback Drew Brees said. “They’re well-coached and their backs are against the wall, so we’re going to get their best performance.”

The Saints’ defense has been among the NFL’s best the past five games after looking like arguably the worst through the first three weeks of the season.

A 48-40 opening-week loss to the Buccaneers and 43-37 overtime win vs. the Falcons had New Orleans ranked last in points allowed per game through the season’s first few weeks. Now, the Saints are on a five-game run of allowing 17 or fewer points, the latest being a 28-14 victory at Tampa Bay last Sunday.

Linebacker Demario Davis said the transformation stems from players staying focused on their goals, learning from mistakes and trusting the coaching staff.

“You want to throughout the season perfect your process and, at this point, your process should be pretty much perfected,” Davis said.

Jordan has been a big part of the Saints turnaround with 12 sacks.

“He’s exceeded my expectations,” Davis said of Jordan. “I knew he was one of the top pass rushers in the league, but to see firsthand the impact he has on games it’s phenomenal.”

The Saints will surely be keying on Christian McCaffrey, who has become Carolina’s all-purpose running back in the same mold that Panthers offensive coordinator Norv Turner once used Chargers running back LaDainian Tomlinson.

McCaffrey rarely leaves the field for Carolina, and with 926 yards rushing and 701 yards receiving, he has a legitimate shot to join Roger Craig and Marshall Faulk as the only players in league history with 1,000 yards rushing and receiving in the same season.

He has also scored 12 touchdowns in the past seven games.

Brees has averaged 302.4 yards passing with 13 TDs and four INTs in past seven games vs. Carolina.

Panthers coach Ron Rivera said the key will be to get pressure on Brees up the middle, similar to what the Cowboys were able to do against the Saints a couple of weeks ago, and to not fall for his pump fakes.

“We have to stay discipline,” Rivera said.

Running back Mark Ingram can make his mark on the Saints’ franchise record books with one more touchdown run. He has 49 for his career, tying him with Deuce McAllister.

McAllister is still around team headquarters often. He is a color commentator on radio broadcasts of Saints games. Ingram has referred to McAllister as a mentor and Saints second-year running back Alvin Kamara said it’s apparent that McAllister wants Ingram to break his record, which has stood for a decade.

“When the team has success, individual accolades will follow,” Kamara said. “So that’s just a testament to him, not focusing on him, but focusing on the team and what helps the team get better and be successful.”