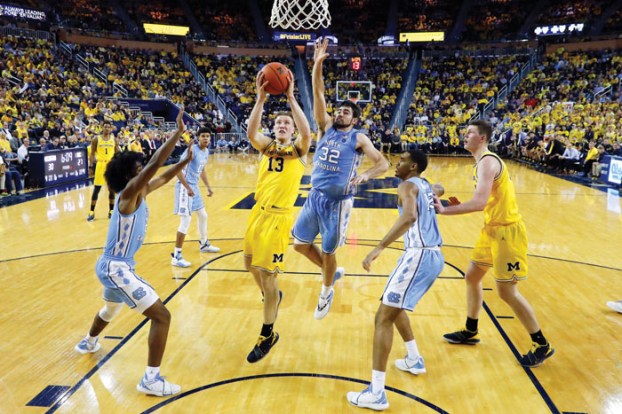 FILE - In this Nov. 28, 2018, file photo, Michigan forward Ignas Brazdeikis (13) drives against North Carolina in the first half of an NCAA college basketball game, in Ann Arbor, Mich. No. 12 North Carolina hasn't been good enough defensively in either of its two losses. The Tar Heels can't afford to repeat those issues Saturday with fourth-ranked Gonzaga coming to Chapel Hill. (AP Photo/Paul Sancya, File) 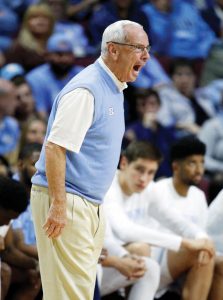 FILE – In this Nov. 22, 2018, file photo, North Carolina head coach Roy Williams yells during the second half of an NCAA college basketball game against Texas, in Las Vegas. No. 12 North Carolina hasn’t been good enough defensively in either of its two losses. The Tar Heels can’t afford to repeat those issues Saturday with fourth-ranked Gonzaga coming to Chapel Hill. (AP Photo/John Locher, File)

By AARON BEARD, AP Basketball Writer
CHAPEL HILL (AP) — North Carolina can score the basketball. Roy Williams just needs the 12th ranked Tar Heels to do a better job of keeping opponents from doing the same.
They can’t afford any defensive lapses — whether it’s struggling to handle a screen or pressure a ballhandler — with fourth-ranked Gonzaga coming to Chapel Hill on Saturday night.
“You can defend people several ways,” Williams said Friday. “You can steal their ball and make them turn it over and go down (court). Or you can hold them to a low percentage and not give many second shots. We’ve been sort of in the middle of everything. We haven’t hung our hat on anything that we’re doing really, really well.”
It doesn’t take long to spot the troubles when looking at their losses.
The Tar Heels (7-2) allowed fifth-ranked Michigan and Texas to shoot a combined 55 percent, including 22 of 46 (48 percent) from 3-point range. They also forced just 21 turnovers in those two games, which has cut down on their chances to get out in transition and push the pace the way Williams wants.
Things won’t be any easier against the Bulldogs (9-1), a team with athleticism, experience and plenty of scoring punch.
Gonzaga ranks No. 1 in KenPom’s adjusted offensive efficiency (122.1 points per 100 possessions) and comes in ranked third nationally in NCAA statistics by shooting 52.3 percent on the year. The Bulldogs also average just 11 turnovers per game.
That group caused Duke plenty of trouble in defending their ball screens and motion in winning the Maui Invitational championship game, led by 6-foot-8 junior Rui Hachimura — who is making himself an All-American candidate with his opening-month play. And UNC notably had trouble with screens in its loss at Michigan, just one of many frustrations that left an irked Williams to say afterward, “Right now we stink.”
Graduate student Cameron Johnson sees two immediate things the Tar Heels must improve: defending screens and handling dribble penetration.
“It’s still in progress, but I think we have the ability to be a good defensive team, once we iron some things out,” Johnson said. “I think as we go along and . the freshmen and the younger guys get up to speed with everything that we want to do and everybody gets on the same page defensively, I think we’ll be all right.
“I think we’ve got guys that are capable of guarding the ball. We’ve got some size. We’ve got some length that we can put on the court sometimes. I think we’ll be able to figure it out.”
The Tar Heels are playing the second of just four games in the month of December, which marks the fewest since 1961-62 when Dean Smith was a first-year coach. In theory, that will allow for plenty of practice time for Williams to push his players for defensive corrections and improvement in the weeks ahead.
Yet they’re coming out of an exam break that limited some of those chances since beating UNC Wilmington on Dec. 5, so it’s unclear whether they’ve done enough to sharpen their defense for Saturday’s game.
Beyond that, Williams isn’t sure exactly what kind of defensive team this one might become.
“The teams earlier in the year, they shot a poor percentage against us but I think a lot of times they just missed shots,” Williams said. “And I like to play defense where we cause some of those things to happen. We’re still trying to figure out how we’re playing defense, what we’re going to do defensively and trying to find a way to play defensively that will fit this team.”
___
More AP college basketball: https://apnews.com/Collegebasketball and http://www.twitter.com/AP_Top25
___
Follow Aaron Beard on Twitter at http://www.twitter.com/aaronbeardap

Chargers can no longer be overlooked as Super Bowl contender

By JOE REEDY, AP Sports Writer LOS ANGELES (AP) — The Los Angeles Chargers can no longer be overlooked, whether it... read more