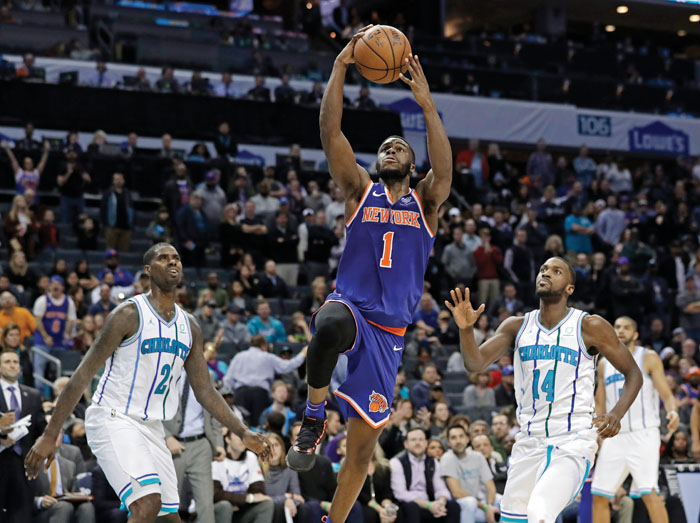 By SOLANGE REYNER, Associated Press
CHARLOTTE (AP) — Emmanuel Mudiay dug his shoulder in, turned and floated a jumper with 27.2 seconds left.
Mudiay knocked down the shot to help force overtime and finished with a career-high 34 points and eight assists to help the short-handed New York Knicks erase a 21-point deficit and beat the Charlotte Hornets 126-124 on Friday night.
“Anytime he gets his shoulder into his guy, he finds a way to make space,” said teammate Tim Hardaway Jr., who had 12 points. “We have total confidence in him.”
Mudiay scored 14 points in the fourth quarter, including the fadeaway jumper to tie it at 113.
Charlotte’s Kemba Walker missed a 3-pointer from the top of the key with 8.2 seconds left and the game went to overtime.
Hardaway and Luke Kornet each hit deep 3-pointers to open OT, and Mudiay had three jumpers to widen the gap. Charlotte missed 8 of 12 shots down the stretch.
“Like Coach always says, just keep chopping that tree,” Mudiay said.
“He continues to get better and better,” Knicks coach David Fizdale said. “I thought he was really clutch.”
The Knicks started the game with 10 active players and finished with just eight after center Mitchell Robinson sprained his ankle in the first period and guard Frank Ntilikina sprained his in the third.
Walker had 16 points and 10 assists for the Hornets, who were hoping to win their fourth straight. Instead, Charlotte blew its biggest lead since Feb. 8, 2015, when it lost to the Indiana Pacers, 103-102.
The problem? Zone defense and turnovers — 16 of them.
“They made the adjustment,” Nicolas Batum said of New York’s switch to zone in the second half.
“We were kind of lax on offense, because we haven’t really faced zone defense this year. We didn’t face zone defense for 29 minutes like we did in the second half so we’ve got to work on that.”
Charlotte got 21 points each from Batum and Cody Zeller, and Marvin Williams added 20.
Kevin Knox had 20 points, Noah Vonleh had 15 points and 11 rebounds, and Enes Kanter had 15 points for the Knicks, who snapped a five-game losing streak.
Charlotte and New York exchanged the lead seven times in the fourth period alone.
KORNET’S CALL
Kornet had 13 points in 24 minutes, including three key 3-pointers. The 7-footer was recalled from the G-League in late November and nearly cut loose to make room for Allonzo Trier, but Ron Baker was released instead.
Fizdale has promised to use Kornet more. He averages 3.3 minutes per game and has only appeared in seven contests.
“When his number is called, he is ready and his hasn’t been called much this year, but he’s kept himself ready and mentally ready,” Fizdale said. “When I threw him out there, he handled business.”
EMOTIONAL NIGHT
Hornets legend Muggsy Bogues started to tear up during a halftime ceremony where he was honored for his contribution to Charlotte basketball. The 5-foot-3 Bogues, drafted by the Hornets in 1988, played for the organization for 10 years.
SHORT-HANDED
Damyean Dotson was nixed from the lineup with shoulder soreness. Recently signed guard Allonzo Trier (left hamstring) and guard Trey Burke (right knee) were also sidelined. X-Rays were negative for Robinson’s ankle injury.
THE JORDAN SLAP
Hornets’ owner Michael Jordan was seen in a video Wednesday slapping the back of Malik Monk’s head after Monk rushed the court to celebrate a win prematurely, receiving a technical foul. On the slap, which picked up some national coverage, Hornets coach James Borrego said: “Michael can create some headlines, I guess.”
TIP-INS
Knicks: Have given up 64 or more points in a half 15 times this season.
Hornets: Took a 17-point lead early on a 22-4 run behind eight points from Walker, who had two 3-pointers during the stretch.
UP NEXT
Knicks: Visit Indiana on Sunday night.
Hornets: Host Lakers on Saturday night.
___
More AP NBA: https://apnews.com/NBA and https://twitter.com/AP_Sports