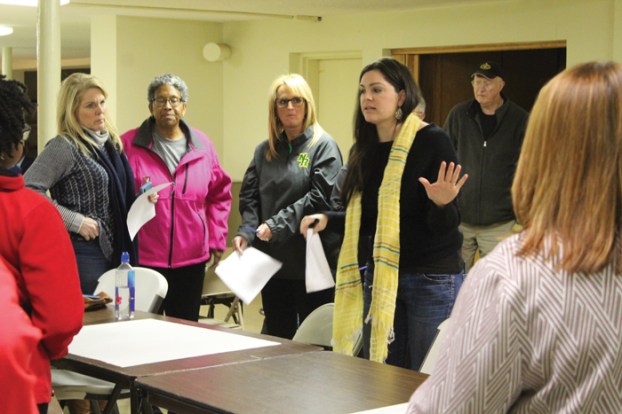 A communal sentiment hung heavy in the air on Thursday as over 100 gathered within the walls of Central Methodist Church. The grassroots group met not only to discuss a recently released plan to close and demolish North Rowan High School, but also to formulate plans and actively work toward saving the school.

The group’s collective perspective was such: struggles currently faced by the school — and all Rowan County schools — could have been prevented by proper planning, action and equal treatment in terms of school funding, repair and redistricting.

Karla Foster, another North Rowan graduate, facilitated the meeting with the help of Lauren West, Jacquelyn Jensen and Corinne Mauldin. Its purpose, she said, was to put pressure on the school board and county so both would “make a good decision.”

“Whatever we do, we need to do it with intent and with the intent of longevity,” she said.

In a near two-hour session, the group of strangers divided and conquered a collection of tasks Foster said were intended to create pressure, leverage and legal standing.

Some wrote letters that would be sent to local news outlets and legislators. Others formulated plans for launching a petition and a social media campaign.

Still others looked at data and the legal aspects of the potential closure.

Many agreed that support of saving the school needed to come from all directions — not just alumni or Spencer residents.

“I think the letters have to come from our whole community, not just from North,” said Kyle Huffman following the work session. “I think everybody has a vested interest in this. We need to tap into that.

For digital efforts in support of the school, attendees suggested a collective hashtag —  #SaveNorthRowan — and sharing videos with stories that showed the impact the school had had on residents, churches, businesses and the like.

The group also planned to shed light on ongoing disparities that both the North Rowan campus and its students faced: long bus rides that were sure to increase with the school’s closure, unequal access to programming and more.

“I believe that if we look back over 20 years we will see inequitable maintenance across the school, because it’s very easy to shut down a school when it’s in disrepair,” said Foster.

Kevin Jones, an incoming school board member elected to represent North Rowan, said he was proud of the community for coming together and that he would continue to fight to keep the school from being demolished.

County Commissioner Craig Pierce, himself a North Rowan graduate, also encouraged the group in its efforts.

“The answer to this whole problem is real simple: you need to get every municipality to send a resolution to the governor requesting that this whole plan be put on a referendum,” he said. “It’s your money that I’m going to spend if you don’t tell me not to.”

If put to referendum, citizens would be able to vote against the school consolidation plan rather than have the decision made for them, he said.

This could prevent potential negative impacts for the town and county’s development and expansion, he said, a thought echoed by others.

“It’s about time that Rowan County takes a stand and says … we care about what happens to the whole Rowan County community,” said Mauldin. “If we want to make Rowan County a place where people want to bring industry and business, we have to improve our whole school system. Not just one area. We have to look at the whole picture.”

Spencer Board of Aldermen look at closing on Park Plaza property

By Andie Foley andie.foley@salisburypost.com With the USDA ready and waiting to proceed with financing Spencer’s Park Plaza purchase, the town’s... read more