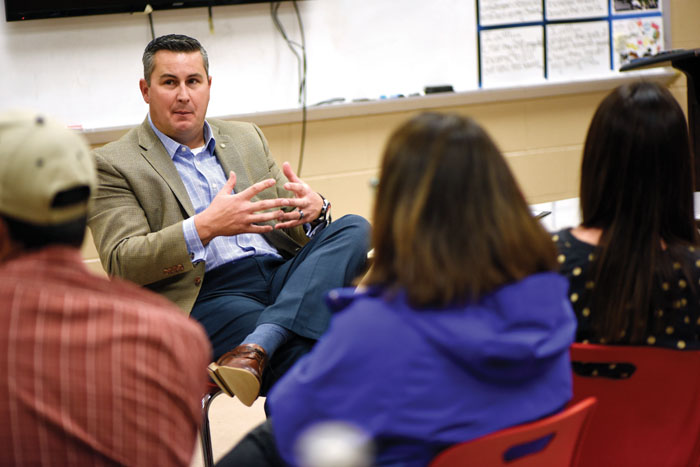 JON C. LAKEY / SALISBURY POST School board member Dean Hunter moderates a small group discussion on the proposed school consolidation plans. The third community input meeting to discuss the proposed school consolidation was held at South Rowan high school on Thursday evening. The meeting format was similar to the previous meetings as Salisbury and East Rowan High schools. Thursday night meeting was a combined meeting for the South and Southeast school communities that were effected by the recent inclement weather. Landis, North Carolina 12/13/18

Thursday night’s South Rowan community input session on a proposal which could close roughly a dozen local schools was all business. While parents at other meetings have expressed concerns about busing, class size and other issues, those present at a combined meeting for southeast and southern Rowan County wanted more information on a proposed vocational high school.

The three-tier, more than 30-year proposal, presented to the Rowan-Salisbury Board of Education in November, recommends, among other things, that Koontz Elementary be shut down and the building turned into a vocational school.

China Grove Mayor Lee Withers brought the topic up during the session’s small group discussions. How would a potential vocational school work, he asked. Would students be removed from their community high schools and spend all four years learning a trade? Or would they spend part of the day at their home school before traveling to take specialized courses at the vocational school?

It’s a debate that Withers said comes up often in southern Rowan — and people often become very passionate about which route would be best.

“It tears people apart,” he said.

Board of Education member Dean Hunter, who was moderating the session, said he was unsure.

“There’s no way to say exactly what that will look like,” he said.

The comment prompted a long discussion as group members shared their own experience with vocational schools, or described the schedules of vocational schools they’d visited. The possibilities, it seemed, were endless — from free-standing schools to ones that worked in shifts, busing students in morning and afternoon.

Trade education is popular in Rowan County, though, and other attendees questioned how a new vocational school could serve all interested students.

“The capacity depends on where it ends up,” Hunter said.

While Koontz is listed in the proposal, many have suggested the school be placed in the West End Plaza, or in an existing school. But, should it be built at Koontz, the vocational school would have roughly the same capacity as the elementary school.

“We would literally close Koontz Elementary,” Superintendent Dr. Lynn Moody said, sitting in on the session. “So it would be the school.”

The cost to renovate Koontz into a vocational high school is estimated to be $10 million. The district has not said whether or not renovations would increase the school’s capacity.

Jason Rollins, a teacher at South Rowan High and member of the school’s design team, wanted to know why a pseudo vocational school couldn’t just be implemented at local high schools. South Rowan was already moving in the direction, he said.

“We see it as a waste of $10 million when we could easily do it here — as could East Rowan, or any high school,” he said.

It could be possible for high schools to keep introductory trade courses, but for students to attend the vocational school for advanced training or to seek certification. But a lot is still up in the air, and things won’t begin to solidify until the Board of Education begins to take the first tentative steps forward in January.

In reference to the eventual decision, Withers encouraged his fellow group members to speak up if they had an opinion, idea or concern.

“Your feedback in this meeting will drive (Hunter’s) decision in about 30 days,” he said.
So if you don’t speak up about something that’s important to you, it’s like throwing rocks in a glass house,” he said.

Withers also said that he was excited by parts of the plan. While the proposal includes the closure of several area schools, it also calls for the construction of new ones — something that could only be a positive if South Rowan’s population grows as expected.

Local Chris Sloop chimed in his support of building new schools. He himself was in the first graduating class of Knollwood Elementary, just after it was built. There’s nothing to inspire students like a new, clean building. Sloop described himself as a traditionalist, and though no one wants to see their community schools close, the payoff was worth it — at least in his mind.

“If we need to close schools down in order to get new schools, sign me up,” he said. “If my taxes need to go up to pay for it, sign me up. This is our children’s education, and we only get one shot at it.”

The proposal also includes the closure and consolidation of:

The remaining community input sessions are:

An online survey is available for those who can’t make it to the input sessions at ednc.org/RSS. The survey is open until Dec. 21. Rowan County residents can view an informational video at: https://www.youtube.com/watch?v=PG3VvkEg1go&feature=youtu.be

Questions, concerns and ideas can be submitted to consolidation@rss.k12.nc.us.