Chargers can no longer be overlooked as Super Bowl contender 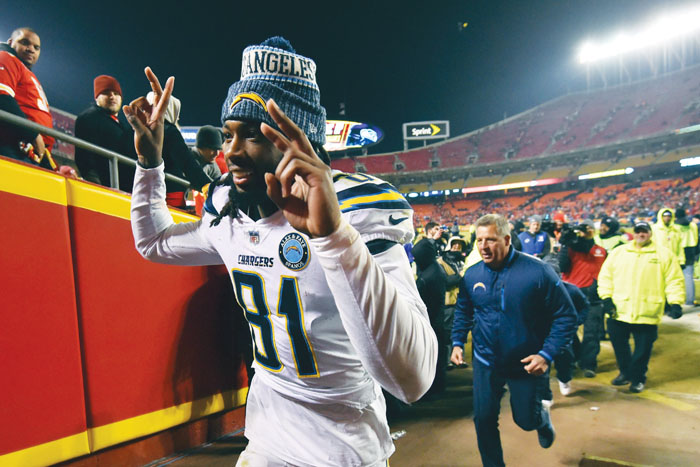 By JOE REEDY, AP Sports Writer
LOS ANGELES (AP) — The Los Angeles Chargers can no longer be overlooked, whether it is on the list of Super Bowl contenders or as a headline attraction in their own town.
Thursday night’s 29-28 come-from-behind victory over the Kansas City Chiefs moved the 11-3 Chargers into a tie atop the AFC West with two games remaining and clinched them their first postseason berth since 2013. The Chiefs hold the tiebreaker due to a better division record, but the Chargers have a viable chance of not only winning the division for the first time since 2009, but also getting home field throughout the playoffs.
“This isn’t the same old Chargers,” safety Derwin James said after their third comeback win in the past four weeks. “We’re here to compete with anybody in this league and we showed it tonight.”
While the Rams and Chiefs have garnered most of the attention, the Chargers have been one of the hottest teams since last season. Their 20-6 mark since an 0-4 start last season is tied with New England and New Orleans for most wins going into Sunday’s games. The Saints and Patriots have a better winning percentage.
That also might start propelling the Chargers toward equal billing with the Rams, who are 19-6 in that same span going into Sunday’s game against Philadelphia. With most of the focus in recent months on the Dodgers making the World Series, LeBron James’ debut season with the Lakers and the Rams, the Chargers have been lost in the shuffle.
“We’ll fly underneath the radar. We just go out there and play the best that we can,” center Mike Pouncey said, “It is nice to get the recognition but at the end of the day we are looking to put ourselves in position.”
Philip Rivers is putting together one of the finest seasons of his 15-year career, and Los Angeles went into the week as one of two teams that are ranked in the top 10 in offense and defense. Pittsburgh is the other.
The offense showed that it has plenty of depth against the Chiefs. Rookies Justin Jackson and Detrez Newsome averaged 4.2 yards per carry with Melvin Gordon and Austin Ekeler inactive due to injuries. Mike Williams, who was a first-round pick last year, stepped up after Kennan Allen’s injury in the first half with three touchdowns (two receiving, one rushing) and the game-winning, two-point conversion.
“It was just a heck of an effort. We ran the ball like we did and the time of possession was good, third downs were good,” Rivers said. “We really went how we wanted to go. Keep those guys on the sideline and convert third downs and score. The receivers also all stepped up with Keenan Allen out.”
It also marked the second consecutive road game that Rivers has rallied the Chargers from a deficit of 14 points or more. Both have defied the odds. Los Angeles’ 33-30 win on Dec. 2 at Pittsburgh marked the first time a team had rallied from a deficit of 16 or more against the Steelers at home.
Thursday night’s game was only the eighth time out of 2,059 games since 2000 that a team won after trailing by 14 points with five minutes remaining.
For the Chargers, late-game dramatics are becoming the norm. Besides the recent road rallies, they beat the Titans in London with a stop on a two-point conversion, held off Seattle with a pass deflection in the end zone and lost to Denver on a field goal on the final play.
“We have been in these situations so many times, we believe we are going to win now,” coach Anthony Lynn said. “I think the guys are really comfortable when we are in these situations. They do not panic. There is no anxiety.”
Rivers is third in the league with a 112.4 passer rating and is averaging 9.1 yards per completion, which is tied for second. His 69.4 completion percentage is the second-highest of his career after 14 games (he was at 69.9 in 2013).
The defense, which has hit its stride with defensive end Joey Bosa’s return from a foot injury, was the first to hold the Chiefs under 300 yards.
The Chargers still have tough tests against Baltimore and at Denver to close the year. The Chiefs are at Seattle next week before hosting Oakland. The AFC West winner is in the driver’s seat for the top seed in the conference and home field throughout, which has been important in past seasons. The AFC’s top seed the last five years has ended up advancing to the Super Bowl.
“I don’t know what more we can face to be ready for January football. I’m not jumping ahead, we’ve got work to do still. All this did was give us a spot and we still need help from Kansas City and win our next two to win the division,” Rivers said. “But, I don’t know what more from a battle-testing standpoint, I don’t know what else we can deal with.
“We’ve won it with different guys in and out of the lineup. So, I don’t think there’s any situation we can get in that we haven’t seen, and that means you feel equipped and ready and then you see what happens when it gets here.”
___
More AP NFL: https://apnews.com/NFL and https://twitter.com/AP_NFL
___
Follow Joe Reedy at www.twitter.com/joereedy