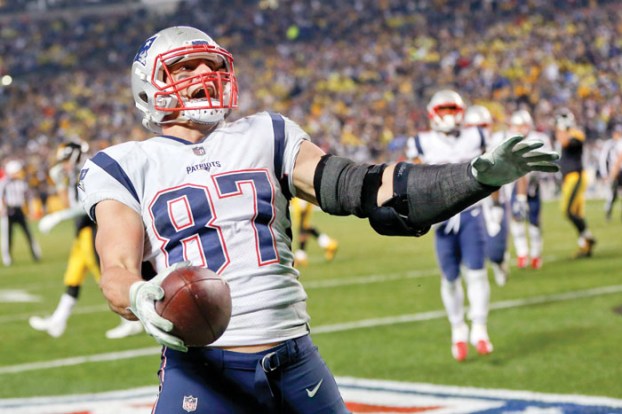 FILE - In this Dec. 17, 2017, file photo, New England Patriots tight end Rob Gronkowski (87) plays against the Pittsburgh Steelers, in an NFL football game, in Pittsburgh. The New England tight end has dominated the Steelers throughout his career, no matter how Pittsburgh opts to defend him. (AP Photo/Keith Srakocic, File)

Burden of a ‘Beast’: Steelers know they must stop Gronkowski

PITTSBURGH (AP) — The words tumble out of Sean Davis’ mouth casually when describing Rob Gronkowski, as if they come up regularly in conversation when the Pittsburgh Steelers safety and his teammates are discussing New England tight end Rob Gronkowski.

Words like “beast” and “freak,” all spoken with a mixture of admiration, respect and frustration. There’s another word Davis might as well throw in when Pittsburgh sees Gronkowski’s familiar No. 87 on the other side of the line of scrimmage: unstoppable.

Years change. So does Pittsburgh’s approach to slowing Gronkowski. His perpetual success against the Steelers does not. Gronkowski is averaging 110.7 yards per game in six regular-season meetings with the Steelers heading into Sunday’s visit to Heinz Field, including a nine-catch, 168-yard masterpiece in New England’s 27-24 victory last season.

The last three receptions came on the game-winning drive late in the fourth quarter, one in which followed a familiar sequence.

Patriots quarterback Tom Brady would take the snap, eschew all other options at his disposal and chuck it to Gronkowski. Several times the 6-foot-1 Davis found himself in the textbook position only to have the ball wind up in the hands of the 6-foot-7 Gronkowski .

On the 2-point conversion attempt after Dion Lewis gave the Patriots the lead, Davis tried to jam Gronkowski at the line, whiffed and could only watch as Gronkowski hauled in a lob from Brady to boost the margin to three.

“On some plays I was doing everything right, playing true to my leverage, playing tight coverage and he still made the catch,” Davis said. “That’s football man. That’s Gronk.”

While Pittsburgh attempted to disguise what it was doing, it would frequently turn to Davis to match up with Gronkowski. The memory of Davis futilely draping himself over Gronkowski time and again remains fresh a year later.

“That’s been lingering in the DB room, especially for me, trying to get my (swagger) back,” Davis said. “But it’s a little different this year. I’m going to be playing deep. I’m just going to make sure those deep shots Gronk got on me last year he’s not going to get them this year.”

They can’t if Pittsburgh wants to take a massive step toward a fifth straight playoff berth. Defensive coordinator Keith Butler and coach Mike Tomlin have spent the week tinkering with personnel attempting to find success against Gronkowski, who has lost to the Steelers just once, a 25-17 defeat in 2011 in which he still managed to catch seven passes for 94 yards.

Asked if he’d noticed any schemes over the years that have found a way to neutralize Gronkowski, Tomlin was typically blunt.

The Steelers — and the rest of the league — may be getting a small assist from Father Time. The 29-year-old Gronkowski has just three touchdowns on 43 receptions in 10 games this season and is on pace to have his lowest catch and yardage total in a year in which he’s appeared in at least 11 games since he was a rookie in 2010, just before Gronk became Gronk.

Not that Pittsburgh believes the numbers. The Steelers might have a point too. Gronkowski caught eight passes for 107 yards and a score in last week’s loss to Miami in one of his most productive performances of the season.

Asked if Gronkowski has lost a step — a topic that popped up after Gronkowski was beaten badly in a foot race to the goal line by Dolphins running back Kenyan Drake on the final play in Miami, a play in which Gronkowski served as a deep safety — Pittsburgh defensive back Mike Hilton shrugged as if to say it doesn’t really matter.

“If he did, he’s still one of, if not the best tight end in the game,” Hilton said. “He might have lost a step, but he’s still a difficult cover for anybody so we’ve got to be prepared.”

Particularly when Brady is the one doing the throwing.

“When you’re playing freaks like (Gronk), you’ve got to be near 100 percent right on everything,” Davis said. “There is no margin of error playing guys like that, playing teams like that. Tom Brady throwing the ball, a guy who throws guys open when they’re playing tight coverage. So I just feel like if we’re all dedicating each play to be right then I feel like we’ve got a better chance.”

NOTES: The Steelers brought in former kicker Shaun Suisham to help mentor struggling Chris Boswell. Pittsburgh worked out two kickers on Wednesday as potential replacements for Boswell, but appear to be sticking with the 2017 Pro Bowler. Suisham kicked for the Steelers from 2010-15 before a knee injury ended his career. … RB James Conner (ankle) did not practice for a second straight day, though offensive coordinator Randy Fichtner said Conner may not have to practice to play. … Davis (knee), QB Ben Roethlisberger (ribs) and LB Anthony Chickillo (ankle) were full participants Thursday.