Reasons to watch all 39 bowl games and who will win 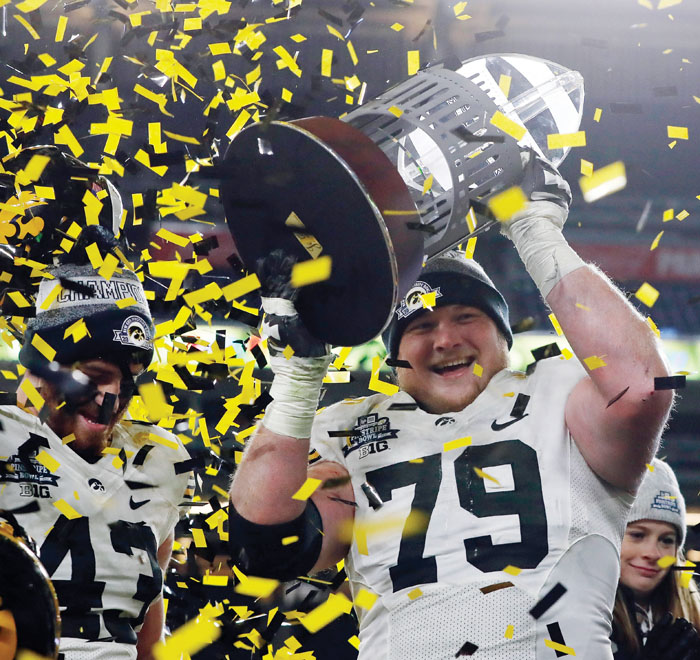 FILE - In this Dec. 27, 2017, file photo, Iowa right tackle Sean Welsh (79) holds up the trophy as confetti falls after Iowa defeated Boston College, 27-20, in the Pinstripe Bowl NCAA college football game in New York. The fun starts for those who did get into the postseason _ and those who get to watch it _ Saturday with five FBS bowl games and stretches through New Year’s Day. (AP Photo/Kathy Willens, File)

A moment of silence, please, for Wyoming, Southern Miss, Miami (Ohio) and Louisiana-Monroe.

Those four teams reached bowl eligibility, but there were no postseason games available for them to play. Don’t dare say there are too many bowls. Not when the Cowboys, Golden Eagles, RedHawks and Warhawks were left out. No freebie Fossil watches for them to re-gift. No go-kart races after practice.

The fun starts for those who did get into the postseason — and those who get to watch it — on Saturday with five FBS bowl games and stretches through New Year’s Day. The College Football Playoff national championship will be decided on Jan. 7, but it already kind of feels like we know who will be in that.

It goes fast. Make time to savor every bowl, and watch them all. Do it for the Cowboys, Golden Eagles, RedHawks and Warhawks.

Why watch? You wouldn’t run a marathon without stretching, right? Consider this FCS matchup a warmup … NORTH CAROLINA A&T 28-14.

Tulane (minus 3½) vs. Louisiana-Lafayette

Why watch? Tulane’s magnificent logo, the Angry Wave , answers the question: What kind of monster would a mad environmental scientist create? … TULANE 28-24

North Texas (plus 8) vs. Utah State

Why watch? This bowl has been decided by one score eight times in its 12-year history, often with unpredictable twists and turns. Think “Breaking Bad,” but nobody dies … NORTH TEXAS 35-28.

Fresno State (minus 4) vs. Arizona State

Why watch? Meaningless bowls? As Sun Devils coach Herm Edwards once said: “You play to win the game” — which is also a great slogan for one of those Vegas casinos … FRESNO STATE 28-21.

Georgia Southern (minus 1) vs. Eastern Michigan

Why watch? You never know when Eastern Michigan will break out its lip-synching skills … GEORGIA SOUTHERN 28-23.

Middle Tennessee (plus 7) vs. Appalachian State

Why watch? The final game for one of the most successful father-son, coach-quarterback duos in college football. Middle Tennessee QB Brent Stockstill has thrown for 12,165 yards playing for his father, head coach Rick Stockstill … APPALACHIAN STATE 28-20.

UAB (minus 2½) vs. Northern Illinois

Why watch? The joy of sacks: All-America DE Sutton Smith and Northern Illinois lead the nation with 50 quarterback takedowns and UAB is third with 43. … UAB 17-14.

Why watch? Two of the oldest coaches in FBS go head-to-head in San Diego State’s Rocky Long, 68, and Ohio’s Frank Solich, 74. There is a Clint Eastwood movie here about tough senior citizens still getting it done … SAN DIEGO STATE 31-27.

Marshall (minus 2½) vs. South Florida

Why watch? South Florida started the season 7-0 and could finish it 7-6, which would be a first in major college football … MARSHALL 31-17.

Why watch? A football game on a tropical island sponsored by an industrial park in Illinois between a team from northwest Ohio and another from south Florida. Is this Mad Libs? … TOLEDO 35-24.

Western Michigan (plus 12) vs. BYU

Why watch? It’s been a while since BYU had a classic BYU quarterback, but freshman Zach Wilson might make the Cougars fun again … BYU 28-17.

Memphis (minus 5) vs. Wake Forest

Why watch? Army has been playing football since 1891 and never won 11 games in a season. The Black Knights can get there with a victory … ARMY 28-20.

Why watch? Fan of a Power Five team and tired of your coach? Scout a couple possible replacements in Buffalo’s Lance Leipold and Troy’s Neal Brown … TROY 24-23.

Louisiana Tech (plus 1) vs. Hawaii

Why watch? This is the last college game before three, bowl-less days. Not only should you watch, but hope it lasts five hours … LOUISIANA TECH 34-28.

Boston College (plus 3) vs. Boise State

Minnesota (plus 3½) vs. Georgia Tech

Why watch? With Kliff Kingsbury back to being an offensive coordinator, Cal’s Justin Wilcox could be the handsomest head coach in the Power Five … TCU 17-14.

Why watch? Temple interim coach Ed Foley promised the Owls will play hard and how could you not believe him? … TEMPLE 27-21.

Miami (minus 4) vs. Wisconsin

Why watch? In a matchup of preseason top-10 teams, find out who will be this season’s biggest flop  … WISCONSIN 23-21.

Baylor (plus 3½) vs. Vanderbilt

Why watch? The Bears and Commodores both won their final games to get bowl-eligible. They should be pumped to be here … VANDERBILT 35-28.

Why watch? Bowl season is all about conference bragging rights and the transitive properties of previous results. How much is a victory over the team that beat Big Ten champ Ohio State by 29 worth to the SEC? … AUBURN 28-21.

West Virginia (minus 1½) vs. Syracuse

Why watch? Get a look at West Virginia’s possible quarterback of the future. Miami transfer Jacks Allison is likely to start with star Will Grier skipping the game ahead of the NFL draft … SYRACUSE 35-31.

Iowa State (plus 3½) vs. Washington State

Why watch? Odds are excellent Washington State coach and history buff Mike Leach knows more about the Battle of the Alamo than anyone in major college football. And there is at least a chance he will talk about it during his halftime interview … IOWA STATE 28-24.

Florida (plus 7½) vs. Michigan

Why watch? This will be the third matchup of Gators and Wolverines since Jim Harbaugh became Michigan coach in 2015. Wait, that’s why NOT to watch. This really should be UCF vs. Florida … MICHIGAN 24-17.

South Carolina (minus 4) vs. Virginia

Arkansas State (minus 1½) vs. Nevada

Why watch? The best pass rusher you have never heard of plays for Arkansas State. Senior Ronheen Bingham had nine sacks and graded out among the nation’s best , per Pro Football Focus College … ARKANSAS STATE 34-30.

CFP Semifinal, Oklahoma (plus 14) vs. Alabama

Cincinnati (minus 5) vs. Virginia Tech

Why watch? It is noon EST on New Year’s Eve. You might be at work, but there’s no way you’re actually working … CINCINNATI 24-17.

Stanford (minus 6½) vs. Pittsburgh

Michigan State (plus 3) vs. Oregon

Why watch? Does your favorite NFL team need a quarterback and have a high first-round pick? You need to know Oregon’s Justin Herbert … MICHIGAN STATE 20-14.

Missouri (minus 7½) vs. Oklahoma State

Why watch? Does your favorite NFL team need quarterback and have a mid to low first-round pick? You need to know Missouri’s Drew Lock … MISSOURI 42-31.

Northwestern (plus 7) vs. Utah

Why watch? If there’s a brawl, Northwestern’s Pat Fitzgerald and Utah’s Kyle Whittingham are two of the head coaches most likely to win a fight … UTAH 28-23.

Why watch? If you love punting — and who doesn’t? — Aggies All-America Braden Mann is on pace to break the single-season record for net average by more than a yard aa 51.1 … TEXAS A&M 28-24.

Mississippi State (minus 6½) vs. Iowa

Why watch? Mississippi State is a weird team. The Bulldogs have played only one game decided by less than 14 points this season … MISSISSIPPI STATE 28-14

Why watch? The Knights have no interest in being lovable underdogs. Expect another offseason of banners and proclamations from UCF if it caps a second straight unbeaten season with another victory against an SEC power … UCF 31-24.

Washington (plus 6½) vs. Ohio State

Why watch? Urban Meyer’s last game as coach of Ohio State will be his first Rose Bowl … OHIO STATE 34-24.

Why watch? The Bulldogs missed the playoff, but could still finish No. 2 in the country for a second straight season, depending on how the bowls go … GEORGIA 35-17.

Why watch? Tide-Tigers IV. If it’s half as good as Rocky IV, the one where he fights Ivan Drago, it’ll be awesome … TBD

Championship week: 8-2 straight; 5-5 against the spread.