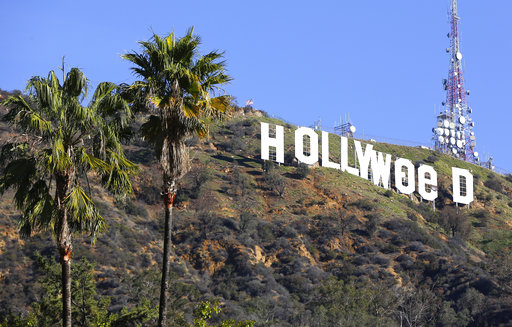 FILE - In this Jan. 1, 2017, file photo, the Hollywood sign is seen vandalized. Los Angeles residents awoke New Year's Day to find a prankster had altered the famed Hollywood sign to read "HOLLYWeeD." California on Monday, Jan. 1, 2018, becomes the nation's largest state to offer legal recreational marijuana sales. In general, the state will treat cannabis like alcohol, allowing people 21 and older to possess up to an ounce of pot and grow six marijuana plants at home. Voters approved legalization in 2016. (AP Photo/Damian Dovarganes, File)

I have a problem with Hollywood/the media is their arrogant hypocrisy. As self-appointed moral arbiters, media stars fail to live what they preach: being passionate ecologists, with carbon footprints of small cities; promoting open borders and gun control behind gated communities, with armed security; and plugging socialism/redistribution of wealth, while enjoying cosseted lifestyles most people only dream of.

Hollywood/the media continue advise us on personal relationships while forgetting their own failed marriages, dysfunctional children and skewed moral compasses. Though no one is perfect in emulating values, Hollywood/media stars seem incapable of leading by example.

Now, they think that insulting, demeaning and mislabeling conservatives, especially women, will somehow change our perspectives on politics — all while expecting us to monetarily support their latest movies, TV shows and merchandising efforts. But why would we pay someone to abuse us?

Let’s face it, we have more use for medical/legal professionals, scientists, trades people, small business owners, educators, first responders, and military personnel than self-involved entertainers, whose extreme lifestyles constantly demand more and more cash. The entertainment industry is oblivious to the fact that it’s completely dependent upon the generosity of the general public. Maybe it’s time to remind them.

I believe it would be psychologically, emotionally and fiscally healthy for Americans to turn away from pop culture and devote themselves to their respective families, churches, schools and communities. It’s also time to explore all those TV series that were missed and the movies that we didn’t see. We can wait them out, but can Hollywood and the media survive over 60 million angry Americans (and their families) walking away in disgust?