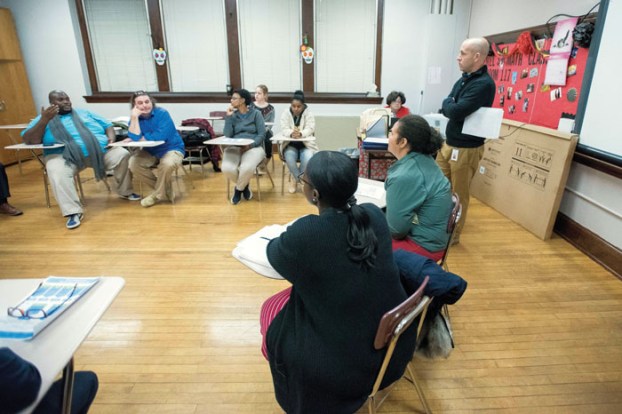 Kevin Jones, a newly elected member of the Rowan-Salisbury Board of Education, moderates a discussion about a proposed school consolidation plan in December at Salisbury High School. Jon C. Lakey/Salisbury Post file photo

As a community member who attended the (school consolidation plan) meeting at Salisbury High, I thought it was little more than a propaganda session. They start off showing you a video telling you why it’s a good idea. Then you break into groups where the school system has three predetermined questions they ask; each question has 10 minutes of discussion. After 10 minutes, the intercom comes on telling you to go to next question; after three questions it’s over.

Was it smart on the school system’s part? Yes. It took almost all of the emotion out of it and they controlled the narrative.

Was it helpful for the community? Not so much. You could get most of what they had to say off the school system website. To top it all off, the leaders of each group were principals and people along those lines. Nobody that makes the decision took part in it. So they will get whatever information the leaders of each group are directed to give them.

If you are going to ask someone to support a plan of this magnitude and you are willing to give no more than an hour each time or six hours total to community input, then that tells me you really don’t care what the community thinks, you are going to do what you wish to. I would say people are disappointed in the whole thing. Tell us what you want us to know, keep from us anything that may bring into question what you want to do, and offer token input.

My suggestion is if you are so sure what you are asking the community to accept is the right thing, then man up and sit there and take the criticism and emotion from the public.

On a recent chilly, wet Saturday afternoon, you could have stepped into the warm, golden sanctuary of St. Luke’s Episcopal... read more