How to fail upwards in Raleigh 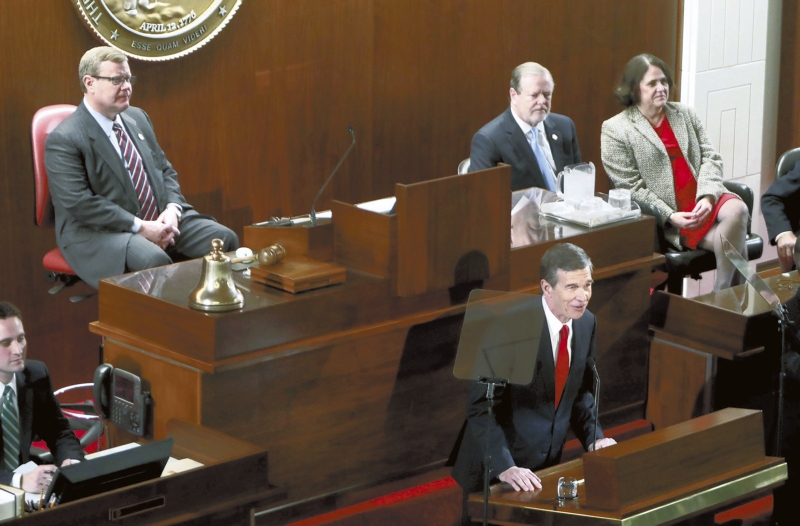 North Carolina Gov. Roy Cooper, front right, delivers his first State of the State address to a joint session of the state legislature in the House chamber of the Legislative Building in Raleigh on March 13, 2017. Speaker of the House Tim Moore, top left, and Sen. Phil Berger, president pro tem, second from top right, look on. (Chris Seward/The News & Observer via AP)

If you’re ever worried about job safety, consider going into the world of politics. As long as your party is in control of things, they’ll take care of you. If nobody comes to mind, I’ve got a prime example in hand: Justin Burr. Burr is one of the youngest legislators in the state; or, at least he was. He lost his seat in the Republican primary earlier this year in the 67th district, which is Stanly County. Read into their decision to kick him out, and part of their rationale must have been that they don’t see him as a qualified recipient of taxpayer dollars for the work he’s done.

Luckily for Mr. Burr, his partisan brethren in the legislature are going to ensure that he fails upwards. … The following quotes are drawn from Ritchie Starnes’ article in the Stanly News & Press:

“Not only has Burr landed a job with the state but multiple repostings of the position along with legislative action to ensure a higher salary make it appear political insiders helped him get a leg-up on the competition.

“Thursday another piece of the puzzle fell into place when state legislators passed SB469. A provision in the bill includes a section aimed at Burr getting a salary above the state’s compensation grading system.”

The position in question was created but not filled by the legislature. Conveniently, “Records obtained by The Stanly News & Press show Burr was allowed to apply for the job after the original posting had been closed for nearly three months…”

“Minimum requirements for the job, first titled program analyst I, included graduation from a four-year college with an emphasis on business and public administration. While Burr has some college, his highest level of education is a high school diploma. In addition to 10 years in the House, Burr’s career experience includes working as a bail bondsman.”

I’m sure that, since he isn’t really suited for the job, they will start him off at the base salary until he gets acclimated to the position. But that would be wishful thinking:

At this point, Burr apparently applied and interviewed. Someone with his outstanding qualifications deserves at least $100K, surely.

The article goes on to provide context for what someone who actually qualifies for this type of position looks like:

“Another such job that qualifies at a higher salary is that of Mike Sprayberry, director of Emergency Management. He has 20 years public service experience, supervises hundreds of employees and oversees natural disaster recoveries. Sprayberry earns $123,000 annually.

At most, Burr would supervise “a maximum of two people.”

Hopefully, this whole episode will provide a useful lesson for those interested in public service: as long as your buddies are in power, you can be and do whatever you want, even if you have zero bona fides.

Kudos to former Rep. Burr for chasing the American dream: a cushy government job with little responsibility and a hefty salary. If only we could all be so lucky.

Kirk Kovach is a native North Carolinian interested in writing about politics, communication and culture.