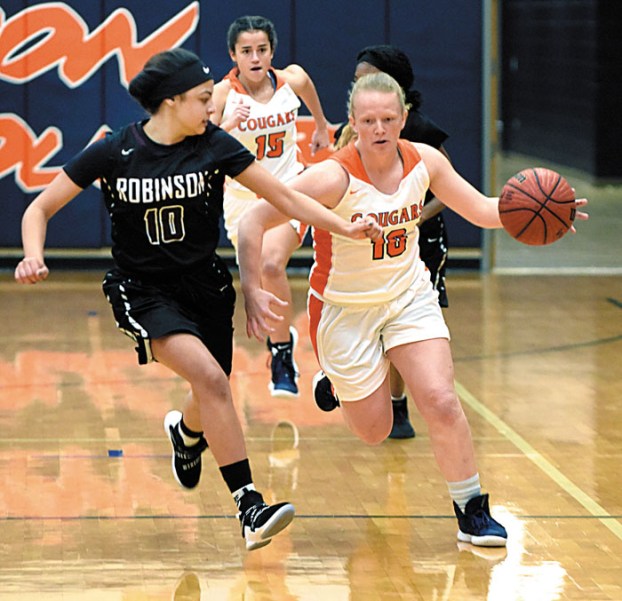 Wayne Hinshaw file photo/for the Salisbury Post ... Carson guard Lani Isley (10) brings the ball upcourt during a recent game against Robinson. Carson is ranked sixth in 3A and has a chance to be 11-0 at Christmas. 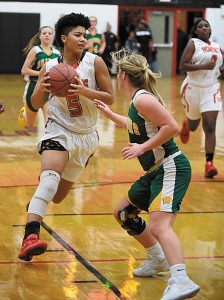 Wayne Hinshaw file photo/for the Salisbury Post …
Salisbury’s Bryanna Troutman (5), shown driving on West Davidson’s Lexi Clontz, is the leader of a Hornets’ team ranked No. 1 in 2A in North Carolina.

Rowan County girls basketball teams are off to phenomenal starts.

Three of the six teams are ranked highly in the state by MaxPreps, with five ranked in the top 25 in their classification.

Coming off a huge win against previously unbeaten Lexington, Salisbury (4-0) is ranked No. 1 in 2A and a surprising No. 6 overall.

South Rowan (2-2), which already owns two huge Central Carolina Conference wins,  is ranked 137th in the state and 25th in 2A.

Christmas tournament seeds are based on pre-Christmas records, so it’s going to be interesting to see who earns the top seed. Carson has the inside track to be No. 1 because it plays the most games.

Carson has a chance to be 11-0 at the Christmas break. The toughest of the four remaining games for the Cougars figures to be a rematch with Central Cabarrus at Carson on Dec. 18. Carson rallied to win at Central in November, 52-41. Carson’s other six outings have been blowouts. The Cougars have overwhelmed opponents so far, 463-230.

West Rowan has beaten a good Lake Norman team twice, including a 93-85 overtime victory. Looking at the remaining schedule, it’s very likely West will reach the Christmas break undefeated, but with fewer wins than Carson.

Salisbury has a challenging game remaining before the break — a home encounter with always strong Ledford on Dec. 18.

All of East’s remaining pre-Christmas games look very winnable. The Mustangs could reach the break with a 9-1 or 10-1 record, depending on whether the North Stanly game that was scheduled for Wednesday can be made up.

How well East can do in what is shaping up as an incredibly tough North Piedmont Conference is a question that won’t be answered for a while, but the Mustangs have a chance to continue the county’s feel-good story for at least several more weeks.

Coach Lakai Brice (70-57) is in her sixth season and expected to be better than last season. The Hornets return four starters from a 19-6 club and have added several talented newcomers.

Coach Ashley Poole (83-56) is in her sixth season and has six experienced players back from a 21-8 team. The key addition is 6-foot junior Whitley Arnott, a transfer from South Rowan. Along with Wilson, she makes West a formidable team on the glass.

Wilson had a 39-point effort in the overtime win against Lake Norman and is averaging 26.4 points per game in the early going. Senior guard Mary Sobataka (16.4) has been making 3-pointers and has over 800 career points. The other veterans are Taylor Poole, who scored 17 at Davie County, Gabby Blabon, Kia Pharr and Cindy Connolly.

Coach Brooke Stouder (171-151) is in her 13th season and is leading a young team that combines deadly 3-point shooting with a tenacious defense that has held four opponents in the 20s. It’s not easy to make up for the scoring that Olivia Gabriel provided last season, but six different Cougars have scored in double figures in the early going.

Coach Kevin Holland (14-41) expected a serious step forward after 4-20 and 5-20, but no one expected the Mustangs to improve as much as they did or as quickly as they did.

East has all but one player back. Leading the returners are Harrison (10.5), Brooke Mitchell, Zee Winford, Caroline Houpe, Carmen Fraley and Grace Eagle. They’ve been joined by freshman Mary Spry, who has improved East’s rebounding and defense.

East has held five opponents to 33 or fewer points. The Mustangs’ only loss was to Central Cabarrus.

Eagle, who missed a good chunk of last season with injury, has been the county’s biggest surprise and is making a lot of 3-pointers. She’s averaging 16.7 points per game.

South lost more than anyone in the county from last season, graduating second-team all-county players Riley Corriher and Tazah Hardin, as well as losing Arnott from an 18-9 squad.

New coach Stacy Ellis is building a team around Downs, a superb guard who is averaging 23.3 points per game and poured in 32 in an overtime win at North Davidson. Madison McGuire and Lauren Shell have the most experience of the other returners.

South is getting a lot from freshman Bethany Rymer, one of the county’s best young athletes. In the win at North Davidson, Rymer scored 22, while McGuire made two clutch 3-pointers in overtime. Rymer also had 18 in a CCC win against East Davidson.

North Davidson (3-1) and East Davidson (4-1) haven’t lost to anyone except South Rowan. That says good things about the Raiders, who have lost to Carson and East Rowan.

The key newcomer is  freshman Hannah Freeman. She’s been lighting it up so far and is averaging 19.3 points per game. Taborn is chipping in with 12 per game.

North had a good showing in a close loss against Albemarle, which figures to be one of the top teams in the Yadkin Valley Conference.