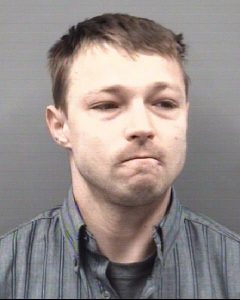 SALISBURY — A Durham man was charged with felony extortion after he pulled a gun on a tow truck driver at Love’s Travel Stop.

The Rowan County Sheriff’s Office additionally charged Matthew Austin Lockamy, 33, with misdemeanor armed to the terror of the public.

Officials said they received a call from someone with ABC Towing who said a man attempted to break into his vehicle and pointed a firearm at him. He said the man walked around to the passenger’s side, shoved open the door and pointed a gun in his face. He demanded a ride from the victim.

The victim rolled up the window and called 911.

When authorities arrived, a man matching the same description and later identified as Matthew Lockamy, was still there.

He was in possession of a .177-caliber Daisy BB gun that was loaded with several rounds of ammunition. Officials said it appeared Lockamy had been consuming some kind of alcoholic beverage.

As he was being arrested he began screaming racial and homophobic slurs. He was being uncooperative, officials said.

Deputies seized a magazine, 12 rounds of plastic ammunition found in the magazine and the CO2 cartridge used to power the weapon.

He remained in the Rowan County Detention Center under a $20,000 secured bond.