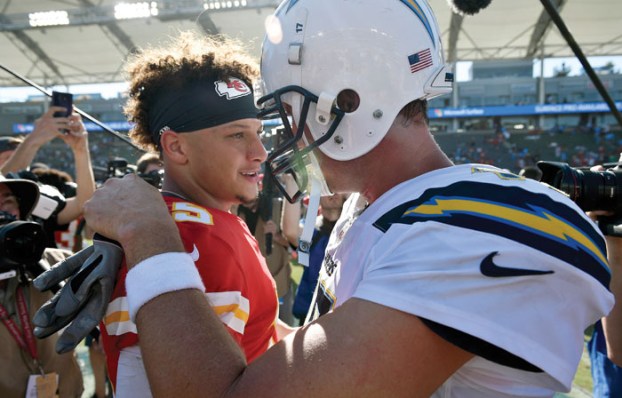 FILE - In this Sunday, Sept. 9, 2018, file photo, Kansas City Chiefs quarterback Patrick Mahomes, left, greets Los Angeles Chargers quarterback Philip Rivers after a win in an NFL football game in Carson, Calif. The Kansas City Chiefs are missing their star running back, likely without his backup and could have their top two wide receivers hobbled or shelved for their crucial AFC West showdown against the Los Angeles Chargers on Thursday, Dec. 13. (AP Photo/Kelvin Kuo, File)

KANSAS CITY, Mo. (AP) — The Kansas City Chiefs are missing their star running back, likely without his backup and could have their top two wide receivers hobbled or shelved for their crucial AFC West showdown against the Los Angeles Chargers on Thursday night.

They still have Patrick Mahomes, though.

And they’re still playing the Chargers.

Yes, the Chargers (10-3) are one of the hottest teams in the NFL, having won three straight and nine of 10 to close within a game of Kansas City (11-2) in the division race.

But the Chargers also have had about as much luck against the Chiefs as the Redskins have had with quarterbacks this year, losing nine straight and many of them in lopsided fashion.

That includes this season’s opener in Los Angeles, when Mahomes announced his arrival to the NFL with his first four touchdown passes in the Chiefs’ 38-28 victory at StubHub Center.

“We’re familiar with this group, but they do so many things. It’s never easy going up against Kansas City,” Chargers coach Anthony Lynn said.

“Go back to September. You can go back to last year, to 2017, when we lost to those guys twice — same things. They are just really good.”

The Chiefs have continued to play at a high level despite some personnel challenges.

Running back Kareem Hunt was released nearly two weeks ago because of off-the-field issues, and new starter Spencer Ware hurt his hamstring last Sunday against Baltimore.

Wide receiver Sammy Watkins is likely to miss Thursday night’s game with a lingering foot problem, and speedster Tyreek Hill is nursing wrist and heel injuries, but has insisted all week that he’ll be ready.

“One thing we have been talking about all season long, you never know when your number is going to be called, so it is important that you are ready,” Chiefs offensive coordinator Eric Bieniemy said. “It’s all hands on deck. When it’s all said and done, we go out and play.”

Besides, it’s not as if the Chargers haven’t had injury issues of their own.

Running back Melvin Gordon is expected to be a game-time decision after spraining his right knee against Arizona and missing the past two games. His primary backup, Austin Ekeler, is likely out after hurting his neck and sustaining a concussion in last week’s win over the Bengals.

“I’ve been grinding hard to get back,” Gordon said. “I know Coach (Lynn) is trying to be careful and doesn’t want me to further hurt myself or things like that. So we’ll see where that goes.”

If he’s unable to play, rookie Justin Jackson would get his first NFL start.

“What is it, Week 15 in the NFL? These things happen,” Chargers offensive coordinator Ken Whisenhunt said. “We’ll see who shows up Thursday and go from there.”

As the Chiefs and Chargers prepare to meet, here are things to know:

The Chiefs can clinch their third straight AFC West title and a first-round bye in the playoffs with a win. But even with a loss, the Chiefs would hold the tiebreaker over the Chargers by virtue of their better division record. Los Angeles needs a win to clinch its first postseason trip since the 2013 season.

“Both teams are going to be all hyped up and ready to go,” said Chiefs coach Andy Reid, who is 11-3 against the Chargers in his career.

There have been signs this week that Chiefs safety Eric Berry will make his season debut against the Chargers. Berry sustained a season-ending injury in last year’s opener, then hurt his heel early in training camp.

“It is killing him not to be out there,” Reid said, “but at the same time, you want to be smart with it. I know he would like to play in the game.”

RIVERS RUNS THROUGH IT

Mahomes has been getting all the attention, but Chargers counterpart Philip Rivers has been nearly as good this season. He already has 29 touchdown passes, five shy of his career best, and his interception rate is the lowest of his career.

But Rivers also has struggled against the Chiefs, throwing 14 interceptions during the Chargers’ nine-game losing streak. “He’s a guy who can make all the throws,” Chiefs cornerback Kendall Fuller said.

The Chiefs hope wide receiver Kelvin Benjamin, who was cut by the Bills and signed with Kansas City last week, will be active for the game. Benjamin would provide a big body on the outside and some additional depth with Watkins likely to be out.

Both teams dismissed the challenges of playing on a short week, especially given how well they know each other. But the Chiefs also were at home Sunday, and the Chargers will be traveling across two time zones to Arrowhead Stadium, one of the toughest venues in the NFL.

“We have a lot to prepare for,” Lynn said, “and like I said, it’s going to be more of a mental week. So we have to find ways to get that done.”