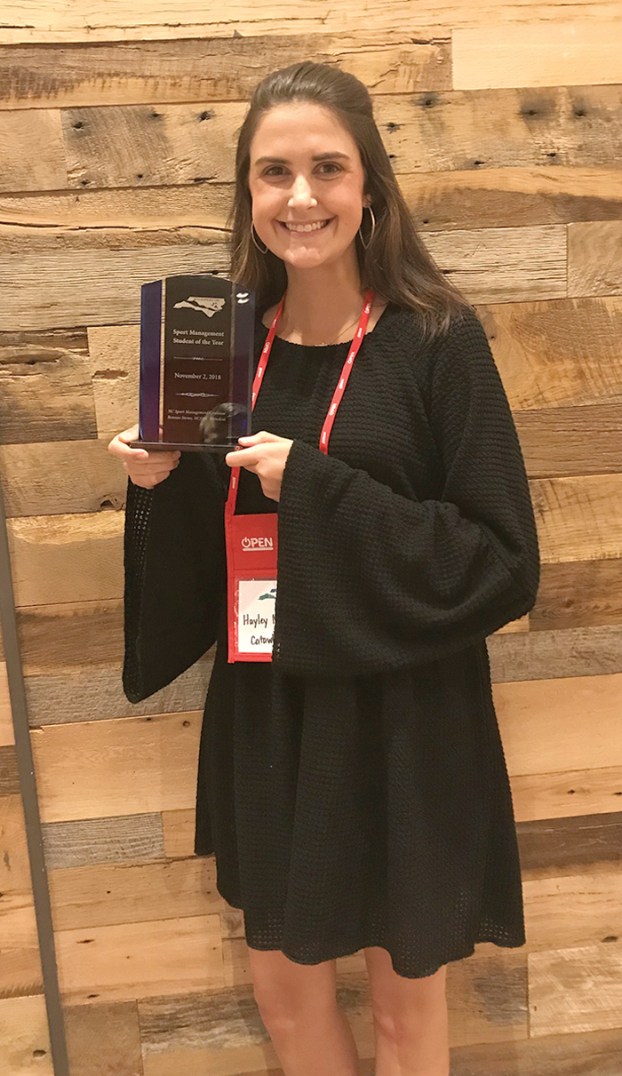 In accepting her award, Morgan said, “I know there is no way that I could have received this without the constant support and guidance of my professors and mentors at Catawba College, and for that I am extremely appreciative.”

Morgan, a Rowan County native, has been active during her time at Catawba as a sport management major and marketing minor. During her freshman and sophomore years, she attended Chip Ganassi Racing marketing events which featured drivers, sponsors and live music in an effort to reach college-age students.

Throughout her entire time at Catawba, she has worked under Senior Associate Athletic Director for Communications Jimmy Lewis. In that role, her responsibilities have included video, graphics, statistics and scorekeeping; for her outstanding work ethic, she earned the Catawba College Sports Information Student of the Year Award in both 2016-2017 and 2017-18.

Academically, Morgan completed two internships within the Coastal Plains League (CPL), one with the Asheboro Copperheads as a multimedia intern where she managed the team’s Snapchat and Instagram accounts, and another with the Thomasville-High Point Hi-Toms where she served in a similar capacity.

In addition to these experiences, Morgan also competed in the NCAAHPERD-SM Case Study Competition in 2017 and 2018, volunteered with the Big South Conference Women’s Soccer Championship in 2017, worked on the hospitality team for the ACC Football Championship Game in 2016, 2017 and 2018, and served as a volunteer with Special Olympics.

Morgan represents the second consecutive Catawba College sport management student to win this coveted state award. She was preceded by Brandon Floyd ’17, who is now working in the athletic department at the University of Arkansas after he was named the 2017 N.C. Sport Management Student of the Year.

To be considered for the award, sport management students are required to submit a video resume which is posted on YouTube and judged by the North Carolina Sport Management Board.  Morgan’s submission can be viewed on YouTube under the title, “Hayley Morgan: Sport Management Student of the Year Video.”

The other award winner from Catawba College at the 2018 convention was Marcus Crawford of Florence, S.C., who captured the 2018 Ignite Presentation Competition. The Ignite format is a five-minute presentation with 20 slides, however, the slides automatically advance every 15 seconds; it’s the presentation equivalent of a haiku or sonnet. The theme for this year’s competition was “Unity through sport: How can sport promote unity and peace.”

Crawford shared, “It was a great opportunity to compete against other sport management students, and an even bigger honor to win the Ignite Competition.

Morgan and Crawford also competed in the case study competition alongside their Catawba peers who included Addison Watson of Kernersville; Lee Poteat of Salisbury; and Emily Goddard of Salisbury. This year’s case study challenge was to develop a robust marketing, media and promotional strategy for a DII athletic department with a limited budget. The judges for the competition included Lenoir-Rhyne Athletic Director Kim Pate and Assistant Athletic Director for Marketing & Promotions Aaron Bessey.

Poteat shared this about his first experience attending the NCAAHPERD-SM Convention, “The trip to Winston-Salem for the case study competition was such a great experience. Being around students from other schools who are wanting to work in the sporting industry, competing with our creativity, and receiving feedback from actual college AD’s was an experience of a lifetime.”

The two-day sport management academic convention has a unique format. The first day is focused on scholarship and faculty development, while the second day is centered on professional development for undergraduates, highlighted by the case study competition.