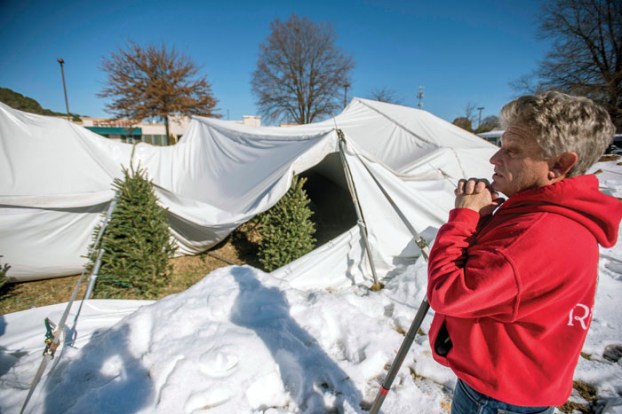 JON C. LAKEY / SALISBURY POST Mike Blowers and his co-workers woke up every hour or so early Sunday morning to knock the snow accumulating on the top of the 80 foot by 50 foot tent covering fresh cut Christmas trees. Blower works for River Ridge Tree Farm , from Crumpler, NC has managed the Salisbury tree lot location for over seven years. Despite the constant attention to the tent, the tip top of the hard to reach part of the tent continued to accumulate the snow and by 9 AM Sunday morning the tent began to collapse with Blowers and his partner still underneath. Both men were able to crawl out from under the tent but not before the tips of several trees on display poked through the tent roof. Blowers main goal is to sell the undamaged trees while the tree season is still underway to hopefully offset the cost of the repairs to the damaged tent and poles. Salisbury, North Carolina 12/11/18

Picking up the pieces: Area businesses contend with Diego’s damage

For Mike Blowers with River Ridge Tree Farm, the approach of Winter Storm Diego signaled more than a need to stock up on snow supplies like ice melt, bread and milk. It signaled an impending night of hard work battling accumulating snow as it settled over the peaks and valleys of the 80-by-40-foot tent.

The tent housed just under 100 Christmas trees on Jake Alexander Boulevard, so battle Blowers did. Together with a coworker, the seven-year Christmas tree salesman spent Saturday night brushing a torrent of white flakes from the protective canopy.

The war appeared to be won come Sunday morning. But, as temperatures rose and then fell overnight and into Monday morning, mother nature struck back. Accumulations, frozen solid and weighing heavy on the tent’s highest, unreachable apexes, brought the entire structure down shortly after 9 a.m.

Blowers and his coworker were underneath the structure as it fell, but were able to escape without injury.

Some 80 of 90 Christmas trees underneath the structure would not fare as well. Most snapped under the weight of the tent. Others ripped through the covering, a $10,000 investment made by the owner of River Ridge just two years prior: “That’s why we were staying up all night, to protect his investment,” said Blowers.

The River Ridge tent collapse is a story echoed near and far. Just down the road at Jerry’s Shell Station, a smaller tent fell over a section of trees from Icicle Mountain. Some 15 miles away in Mount Ulla at Hoffner Brothers’ Dairy, two outbuildings fell under an unexpectedly heavy accumulation.

One was a commodity shed, housing equipment and heifers. The other was a maternity barn.

While staff may have not been actively working or underneath the structures as they fell, owner Alison Hoffner Clawson said the second collapse occurred as she and others surveyed damage of the first, neighboring and broken structure on Sunday afternoon.

Damaged equipment included a skidsteer, dump trucks and a Gator utility vehicle, she said, and workers were still unsure whether any cattle had been killed.

“I just thank God that no one was in that building,” she said.

Not much can be done at either location until the snow thaws and damage can be more thoroughly assessed. Clawson had several employees out clearing debris on Tuesday afternoon, hoping to at least access and salvage animal feed.

Blowers also called in reinforcements in the afternoon hours. Business would not yet be over for the Jake Alexander stand, he said.

Damaged trees, which would have sold for anywhere from $25 to $215, will be available for sale at a discounted price once salvaged from the rubble. Other, smaller trees that were not under the tent will also be set up and available for purchase — just without the tent for shelter.

Blowers called the concept a “Charlie Brown stand,” or a “storm-related pity party.”

He said he’d rather do that than pack up, as selling trees in Salisbury is something he looks forward to throughout the year.

He cited the sense of community in the area as why: Brookdale bringing homemade cookies in thanks for a donated tree, staff workers from Juice Life coming with hot chocolate and energy bites after the collapse.

He sees no reason to stop traditions he’s kept over the years, donating trees to other organizations like the YMCA, the Rowan County Sheriff’s Department and Salisbury Police Department.

“Even with the tragedy, we’re still going to give to the community,” he said.

Effects of winter storm to linger

By Andie Foley andie.foley@salisburypost.com Precipitation from Winter Storm Diego may be over for Rowan County, but effects will continue to... read more