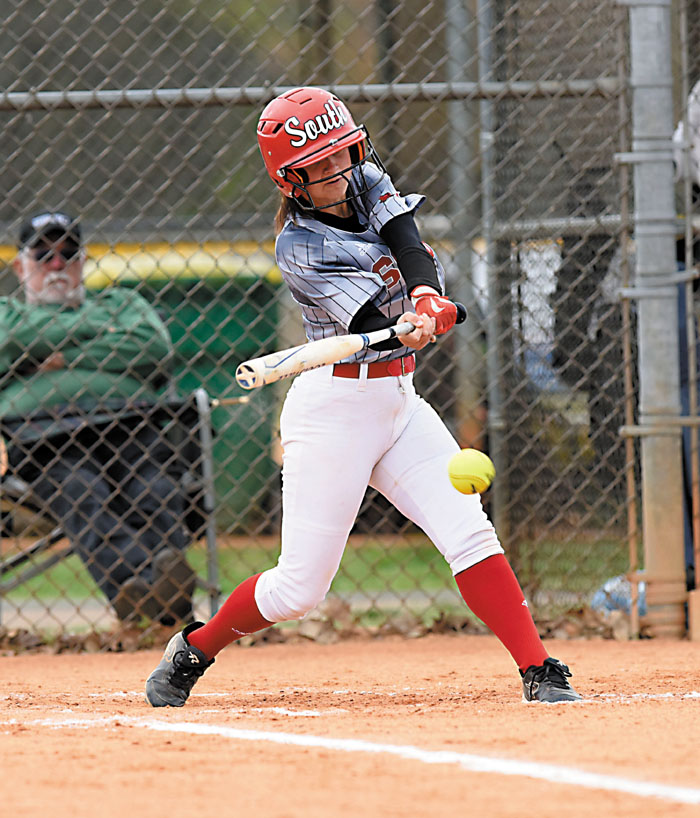 Wayne Hinshaw file photo/for the Salisbury Post ... South Rowan’s Anna Blume (6) is shown in a game from last season. Blume announced recently that she has signed to continue her education and softball career at Lenoir-Rhyne University.

LANDIS — South Rowan senior Anna Blume has devoted most of her life to softball.

“I’ve been playing 10 or 11 years,” Blume said. “My dad was my coach for the first six or seven. That helped me get off to a good start.”

Blume’s career won’t end with her final high school season this spring. She’s one of seven recruits announced recently by Lenoir-Rhyne coach Shena Hollar.  The Bears, who were formidable last season with a 45-10 overall record and a 19-1 mark in the South Atlantic Conference, recruited Blume as a utility player. She was a third baseman for South as a junior after playing left field as a sophomore.

Blume had powered home runs in big Central Carolina Conference wins against West Davidson and East Davidson and was on her way to her best season as a junior when she went down with a knee injury in late March. She missed five weeks.

“I was happy that I made it back for our state playoff win (against East Rutherford), got a hit and did well,” Blume said. “That was a great team win, the highlight of the season for me.”

Blume played on strong travel teams growing up and earned a starting role for the South varsity as a freshman. She was ready. She batted .311.

As a sophomore, she homered in South’s upset victory at West Rowan and she turned in a 3-for-3 game against a very strong Cox Mill squad.

After that injury-plagued junior year, she’ll be expected to be one of South’s team leaders as a senior.

“She’s a versatile athlete, someone we can put just about anywhere, but I really like her at third base because her arm is so strong,” South head softball coach Dean Mullinax said.

“I’m glad we work so hard,” Blume said. “I’m one of those people that like to work at softball constantly. I’m afraid I’d lose something if I took too much time off.”

Blume has attended camps at Lenoir-Rhyne in the summer and fall.

She e-mailed L-R coaches. They came to watch her play last year, and then invited her for an official visit.

“The size of the school is just right, not too big, but not too small,” Blume said. “I like the campus and the coaches. It’s kind of where I had my heart set on going for more than a year.”

Blume believes her best college position will be second base. She plans a major in exercise science.

“They’re getting a really good student as well as a good player,” Mullinax said. “Anna has great personality and a great work ethic. Above all, she’s coachable.”