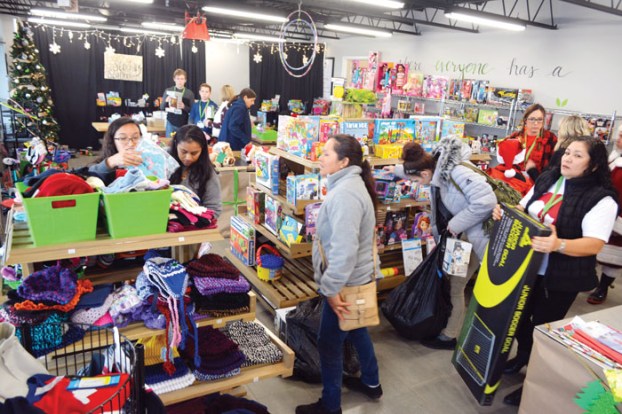 Main Street Marketplace bustled with shoppers Saturday morning during its fourth-annual Christmas store. This was the first year the event has been held at the newly opened facility, and its new name is ‘Christmas at the Market.' Photo by Susan Shinn Turner, for the Salisbury Post.

Christmas at the Market: Main Street Marketplace provides a place for neighbors to purchase gifts

CHINA GROVE — Just like any other business on a Saturday in December, the store bustled with customers, helpers and gift-wrappers.

But this wasn’t just any store: This was Christmas at the Market, an initiative of Main Street Marketplace and Meeting Place.

Now in its fourth year, the event was held for the first time at the newly opened Main Street Marketplace in downtown China Grove. The marketplace usually serves as a food pantry for its clients — the non-profit organization calls them neighbors. But on this particular morning, it was full of Christmas gifts.

That was thanks to the efforts of a group of hard-working elves, also known as the employees of Ceco Friction Products in Landis, owned by Phillip and Susan Coan. Their son, Andrew, headed up the volunteers.

Altogether, some 280 volunteers made Christmas at the Market a reality, doing everything from setting up the market to assisting shoppers to wrapping gifts and more.

The shop has evolved since its inception, said Hope Oliphant, director of programs. The store was previously held at the South Rowan Y.

“It was just so hard to move everything over to set it up,” Oliphant said Saturday morning, surrounded by shoppers in the marketplace. “We didn’t have the room before, but now we do. The food went out and the gifts came in.”

Each participating family could spend $25 per child. The shop was open 1-8 p.m. Friday and 9 a.m.-4 p.m. Saturday, with 10 families shopping each hour. Altogether, 130 families shopped at the marketplace over two days.

Oliphant has worked to make the process smoother each year.

“We held community meetings this year,” she said. “If families wanted to come and shop, they had to attend. We talked about how much money should be spent per child, about how the shopping appointments would work, and about what would be fair to everyone.”

Neighbors requested items that would fill the shop — to gifts they really wanted filled the shelves.

“Some of our neighbors even asked for used items,” Oliphant noted. “We had an Island of the Misfit Toys they could take for free.”

Just like on television, all of the toys had found a home by Saturday morning.

Along with a host of volunteers from local churches, schools and community groups, seven neighbors were paid to staff the shop. Those included graduates of the most recent Getting Ahead class the mission offers.

This was the first year at the shop for one China Grove neighbor.

“My food stamps ran out and I lost my job,” the mother of two said. “It’s a struggle. This Christmas store is a godsend.”

So far, she’d picked out a scooter and a pair of shoes. Her mother gave her the $50 to shop.

“She did it without telling her husband,” the woman said. “I’m trying not to cry.”

The money she’d saved for her children’s gifts was stolen, so she appreciated the deeply discounted gifts available.

The gifts were at first donated, Oliphant explained, then the inventory was refreshed with money the neighbors spent. “We go to Walmart, Target, 5 Below and Marshall’s. The donations get us started.”

Dressed as Santa, Harry Warthen wove his way through the crowd, handing out candy canes. He graduated several weeks ago from the latest Getting Ahead class. This year, he opened 3 Brothers Lawn Services, he said, “from nothing.” Now he takes care of eight lawns.

Picking up the pieces: Area businesses contend with Diego’s damage

For Mike Blowers with River Ridge Tree Farm, the approach of Winter Storm Diego signaled more than a need to... read more