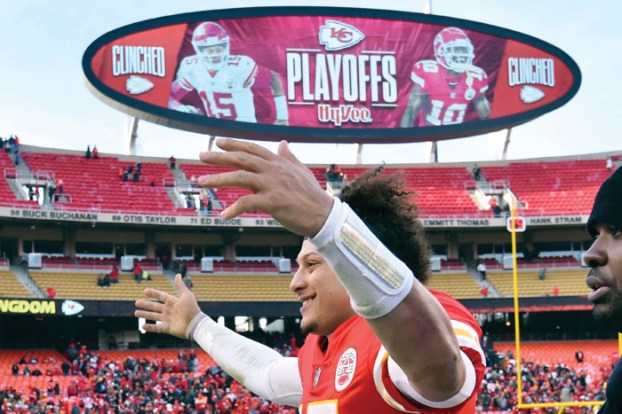 A no-look pass against the Baltimore Ravens.

And he has led the Chiefs to the top of latest AP Pro32 poll .

The Chiefs received seven of 12 first-place votes for 379 points in balloting Tuesday by media members who regularly cover the NFL.

Kansas City (11-2) moved up a couple of spots to No. 1 after rallying for an overtime victory over Baltimore. The Chiefs clinched a playoff berth and maintained a one-game lead over the Los Angeles Chargers in the AFC West.

“There were no gaudy stats for MVP candidate Patrick Mahomes against Baltimore’s rock-solid defense, but there were clutch plays in crunch time in an overtime win that may be the deciding factor in securing home-field advantage in the AFC playoffs,” Newsday’s Bob Glauber said.

The Chargers (10-3) jumped two spots to No. 4 and travel to Arrowhead Stadium on Thursday night to face the Chiefs to open Week 15.

“Can they beat the Chiefs?” Fox Sports’ John Czarnecki asked of the Chargers.

The Rams, LA’s other team, fell from the top spot to No. 3 after Sunday night’s 15-6 loss to the Chicago Bears at Soldier Field. The Rams return to Sunday night play this week when they host the Eagles.

The Bears’ win helped them move up one spot to No. 6.

The New England Patriots slipped a spot to No. 5 after their improbable 34-33 loss to Miami on the final play as the Dolphins scored on a pass and double lateral to complete a 69-yard pass .

It was the longest play from scrimmage to win a game with no time remaining in the fourth quarter since the 1970 AFL-NFL merger.

Another team that fell in the poll after losing was the Houston Texans. The Texans slipped two spots to No. 7 after being defeated by the Colts 24-21 to end their nine-game winning streak.

The Seattle Seahawks and Dallas Cowboys each moved up a spot to Nos. 8 and 9 after winning at home last week. Both 8-5 teams improved their playoff position in the NFC.

The reeling Pittsburgh Steelers, who have lost three in a row, dropped two places to round out the top 10.

PITTSBURGH (AP) — Ben Roethlisberger’s ribs are bruised but not broken.

The Pittsburgh Steelers believe the same could be said about their wildly uneven season.

Roethlisberger believes he’ll play on Sunday when New England visits Heinz Field, one of the few certainties for a team in search of answers thanks to a three-game losing streak, the latest setback a baffling 24-21 defeat in Oakland that included Roethlisberger missing most of the second half after taking a shot to the ribs, another late meltdown by the defense and the latest botched kick by Chris Boswell.

“Whenever talking about consistent failures in recent weeks, it’s usually a multitude of things,” coach Mike Tomlin said Tuesday. “It’s all of the above. We’re open to change, going to make discussions regarding change.”

Boswell was a Pro Bowler in 2017 — a season in which he drilled three game-winning field goals — and signed a contract extension in August that runs through 2022. Yet he has struggled with consistency this season.

When his left foot gave way on the final snap in Oakland, turning his potentially game-tying 40-yard attempt into a line drive that smacked into the sea of players in front of him, it marked his 11th missed kick this season (six field goals, five extra points). He missed just 13 combined kicks from 2015-17.

Tomlin said the team plans “to explore options that gives us the very best chances of the ball going through the upright this weekend.” That includes holding tryouts to give others a look, though Tomlin admitted there isn’t exactly much to choose from in mid-December.

“We’re cognizant of what’s available,” Tomlin said. “The prudent approach is to include Chris in those options.”

There are no such questions at quarterback despite an odd sequence in Oakland that led to Roethlisberger standing on the sideline in the fourth quarter while backup Josh Dobbs tried to build on a four-point lead.

The issue? Apparently an ancient X-ray machine at the Coliseum that offered no clarity on the extent of the rib injury Roethlisberger sustained while being driven into the ground late in the second quarter.

Roethlisberger, team physician James Bradley and general manager Kevin Colbert spent all of halftime trying to get a clean X-ray but none surfaced.

“We never had a full understanding of what the injury was,” Tomlin said. “The medical staff treated (Roethlisberger) to the best of our abilities.”

Treatment that included “medicating” the 36-year-old quarterback while also keeping him out of the game as a precaution.

Tomlin likened the approach to the one the team took during a wild-card game in Cincinnati three years ago in which Roethlisberger hurt his right (throwing) shoulder at the end of the third quarter.

In that game, Roethlisberger stayed off the field until the Bengals rallied to take the lead in the final minutes. Roethlisberger came on and — with more than a little help from Cincinnati — helped the Steelers rally to the victory .

It nearly happened again in Oakland. Roethlisberger completed all six of his passes on Pittsburgh’s penultimate drive, the last a 1-yard touchdown pass to JuJu Smith-Schuster that put Pittsburgh in front 21-17.

“We would only re-insert him if we felt it was necessary,” Tomlin said. “We appreciate what he was able to do … obviously it didn’t end in the way that we would like.”

Roethlisberger said during his weekly radio appearance Tuesday he expects to face the Patriots (9-4).

Tomlin indicated pain management will be the biggest concern. Roethlisberger rarely practices on Wednesdays and there’s a chance he could be given an additional day off.

Tomlin said the team did not file a complaint with the league about the X-ray machine in Oakland and declined to use it as an excuse for any of the decision-making on the sideline or the play on the field. He’s well aware Pittsburgh’s issues extend far beyond Boswell, sloppy turf or outdated medical equipment.

The defense has allowed second-half leads to get away each of the past three weeks. The Raiders, who came in tied with San Francisco for the worst record in the league, went the length of the field twice in the final 10 minutes, just as the Los Angeles Chargers at Heinz Field did the week prior while storming back from a 16-point deficit to pull out a 33-30 victory.

While Tomlin cautioned the defensive tweaks he’s considering might not be “noticeable to the naked eye” he’s aware the Steelers — their AFC North lead over Baltimore down to a half-game — are in serious need of a kick-start.

NOTES: RB James Conner (ankle) could return against New England. Conner missed his first game of the season last week after getting hurt late against the Chargers. … RT Marcus Gilbert (knee) could return to practice. Gilbert hasn’t played since mid-October.

By The Associated Press Jessica Mendoza will have more of a presence on various ESPN platforms starting next baseball season.... read more