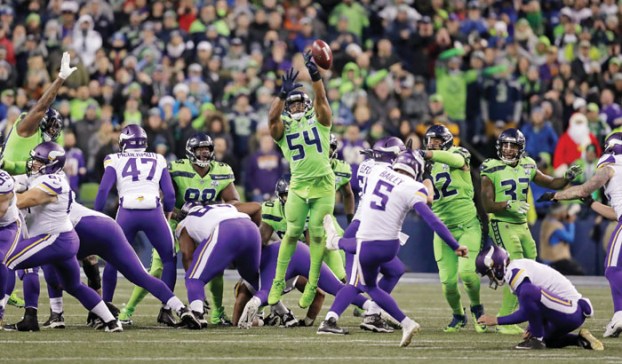 Another Monday night in Seattle ends with controversy

RENTON, Wash. (AP) — It’s almost a given now that a Monday night game played in Seattle is going to include some sort of wackiness.

The latest chapter came during Seattle’s 21-7 win over the Minnesota Vikings that has the Seahawks on the cusp of clinching an NFC playoff spot. The Seahawks need just one win against either of their final two NFC opponents — at San Francisco this week or at home to Arizona in Week 17 — to wrap up a wild-card berth.

They didn’t get here without controversy, however, after officials failed to call a penalty on Bobby Wagner when he leaped the line of scrimmage to block Dan Bailey’s field goal attempt with 5:38 remaining.

Wagner’s play was a marvel — clearing the Minnesota line without the benefit of a running start. But his hands clearly touched the backs of two teammates as he leaped. Wagner didn’t seem to care postgame whether his play was legal or not, and coach Pete Carroll emphasized on his weekly radio show on KIRO-AM on Tuesday morning that he considered it a judgment call.

“They have to judge. You can place your hands on players. You can’t use it for leverage. That’s where the judgment comes in,” Carroll said.

The leap added to a list of Monday night controversies that began with the 2012 “Fail Mary” game. The disputed touchdown pass from Russell Wilson to Golden Tate on the final play of that game to beat Green Bay triggered an end to a dispute between the league and its officials.

That was followed in 2015 by a 13-10 win against Detroit during which Kam Chancellor forced a fumble at the 1-yard line with less than two minutes remaining, and K.J. Wright illegally guided the ball out of the end zone for a touchback. Wright should have been called for an illegal bat and Detroit should have regained possession at the Seattle 1. Instead, the Seahawks ran out the clock.

In 2016, officials failed to call a roughing the kicker penalty against Richard Sherman late in the first half against Buffalo. Eventually, Dan Carpenter missed a 54-yard attempt and Buffalo ended up losing by six.

And then came Wagner’s leap. Had Wagner been penalized, the Vikings would have had a first down at the Seattle 15. As it stood, Wagner’s block sparked a quick drive by Seattle capped by Chris Carson’s 2-yard touchdown run that put the game out of reach.

“He game-planned the hell out of it, so we already knew he was going to block it,” Seattle defensive tackle Quinton Jefferson said. “That was a great call and it worked. That’s what we save those things for. He made a great leap, blocked it.”

The Seahawks almost can’t miss the postseason at this point. And it was Seattle’s defense that led the way against the Vikings.

The Seahawks used a variety of coverages to stymie Kirk Cousins and keep Stefon Diggs and Adam Thielen from being factors until late in the game. The Seahawks held Minnesota to 276 total yards after allowing 450 yards or more in three of the previous four games.

NOTES: Carroll said on his radio show that LB Mychal Kendricks injured his knee during the game and was unsure if he would be able to play Sunday. Kendricks briefly went to the sideline during the second half but returned to the game. … Seattle rushed for 214 yards, second-highest total of the season. The Seahawks rushed for 273 yards against the Rams. Both of those performances came with Jordan Simmons filling in at right guard for D.J. Fluker, who missed Monday’s game with a hamstring injury.

Former teammates embrace final chance to compete on the court