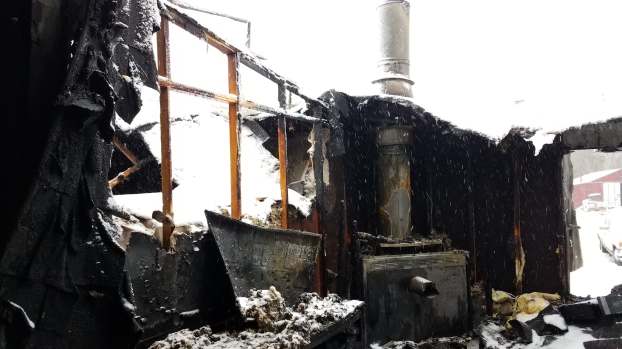 Around 8 a.m. Sunday, workers from the Scotch-Irish Fire Department responded to structure fire on Needmore Road in Woodleaf.

According to the department’s Facebook page, the first arriving engine reported a working house fire in the home of one of its members, Dustin Newton.

Newton said the fire was discovered by his wife, Michelle.

“My wife smelled smoke and woke up, went out into the living room and saw it,” he said. “That’s when she came back in here and woke me up.”

Newton said his experience working with the Scotch-Irish Fire Department helped him in the following moments as the pair tried to escape the flames.

“When she woke me up, my main focus was to get her and our dog out safely,” he said. “My experience with the fire department made a big difference on how I was able to respond to it, stay calm and get us out.”

He tried the front door four to five times, finding that it had already swelled shut from the heat. Newton and his wife then went back to the bedroom, shutting the door before opening the window and removing the screen.

They were then able to drop their dog, a rat terrier, out the window before escaping themselves.

All were unscathed, but weather conditions and high winds resulted in the home being heavily damaged by fire and smoke. Newton and his wife, Michelle, lost all their belongings, excluding a few clothing items.

“If Michelle hadn’t woke up when she did, it probably would have been a different outcome,” Newton said.

Rowan County Fire Marshal Deborah Horne said the fire started in a wood stove. Newton said it appeared the floor underneath the device had gotten too hot and caught fire.

“The fire department did an amazing job arriving quickly even with the weather and saving as much of their property as possible,” Horne said.

For now, Newton and his wife are now staying with his parents, who live next door to the destroyed home.

Newton said he and Michelle have received support following the tragedy from members of the Scotch-Irish Fire Department, other fire departments, church and “just the whole community.”

His department is collecting donations to help the family replace their lost belongings such as clothes, shoes and other necessities. Donations are being accepted at the Scotch Irish Fire Department.

Monetary donations can be made to the department or Hanford Dole Red Cross with “Newton Family” on the info area of the check.

Clothing items and sizes are as follows:

Governor urges caution across the state

RALEIGH — With some portions of North Carolina receiving up to two feet of snow and ice, Governor Roy Cooper... read more