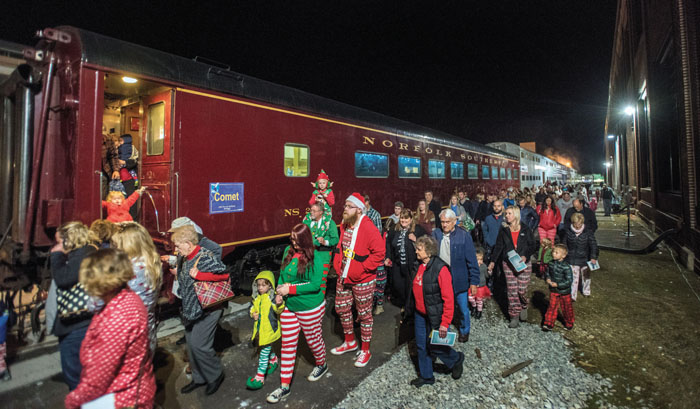 JON C. LAKEY / SALISBURY POST Passengers disembark from the Polar Express after a trip to the North Pole during last year’s event at the North Carolina Transportation Museum in Spencer. Sunday’s Polar Express event was postponed due to winter weather.

SALISBURY — Safety was on the minds of N.C. Transportation Museum executive director Kelly Alexander and Piedmont Players Theatre resident director Reid Leonard as they canceled their Sunday shows on Friday.

Sunday’s Polar Express Train Ride at the N.C. Transportation Museum was postponed to Dec. 23 due to the winter weather.

Alexander said though the Polar Express is the largest money maker, the call to move it was the right one.

On Friday and Saturday, the museum employees called more than 1,000 ticket holders to notify them about the postponement and let them know their options: coming on Dec. 23, working to figure out a different day or a full refund.

“You have to know this is the right thing to do,” Alexander said.

Alexander said more than half were OK with the Dec. 23 date.

She said safety was their main concern, especially with the majority of attendees coming from more than two hours away.

For Leonard, they decided Friday to cancel their Sunday matinee show of “A Christmas Story.” They called more than 100 ticket holders to reseat them or offer a refund.

He said rescheduling can be difficult for attendees because this time of year is very busy. Some ticket holders were disappointed and others said they couldn’t come to a later A Christmas Story performance but wanted to transfer to another show.

Leonard said it was important to make the decision as early as possible with the chance that someone could miss the memo and travel in unsafe conditions, adding that walk ups are fairly common.

He said a couple years ago it started to snow five minutes into the performance and had to call off the performance during intermission so they could return home safely.

The Christmas Tradition at Meroney Theatre was canceled for Monday night as well, which Leonard said may hurt Rowan Helping Ministries donations. He was unsure if Tuesday’s night performance would be canceled too.

A Christmas Story began showing last week and continues Dec. 13-15. The cast had four to five shows a day with the evening shows and shows for students. Leonard said the cast was starting to get tired and it was good for them to have a little break.