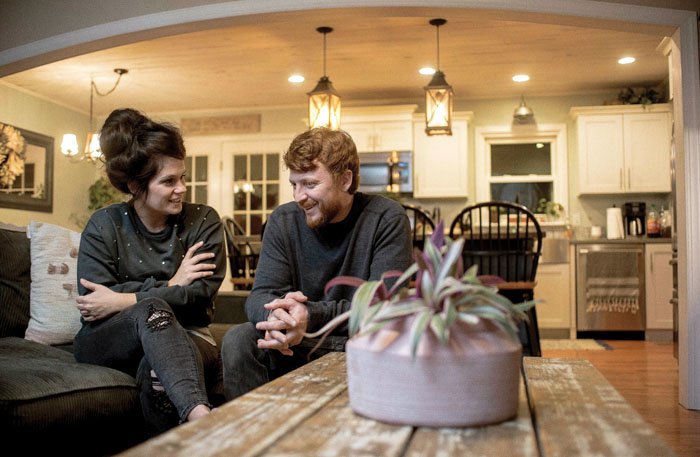 JON C. LAKEY / SALISBURY POST Amanda and Dustin Burns recently completed classes to allow them to become foster parents. The couple, who has three young children of their own, hope to be able to help a child who is in need of fostering. The availability of foster parents falls very short of the need of available children. Granite Quarry, North Carolina 11/27/18

SALISBURY — Dustin and Amanda Burns have, in their words, been learning to become “professional parents.” The Granite Quarry couple is already parents to three young girls but have recently completed certifications to become foster parents through Nazareth Child & Family Connection.

Dustin, a native New Yorker and Amanda, a native Californian, have always wanted to adopt but felt led to look into fostering with the option to adopt.

Amanda admitted that while they know taking in a foster child doesn’t always result in an adoption, they are still open to providing a home for children.

The children who are part of the Nazareth Child & Family Connection foster/adopt program are legally free and at-risk children, who over a period of time have been unable to return to live with their birth parents or with other family members.

Once the children are available for adoption, their foster parents are given the first opportunity to adopt.

In a state foster/adopt program like the Rowan County Department of Social Services, the goal is to reunify the child and the biological parents. The biological parents are often given multiple opportunities to correct the problems for which their children were originally removed from the home.

Amanda and Dustin know several couples at Life Church, where they are members, and friends who are foster parents. Those families have shared their experiences with the Burnses and have received support in return.

“My parents were not registered, but they took in a friend who really needed help,” Amanda said.

There were always foster children in Dustin’s grandmother’s home.

His family was concerned that the couple didn’t really know what they were getting into, he said.

Eventually, they’ve come around, he added.

The couple just completed a 10-week certification program where they met once a week for three hours. The certification includes trauma training, CPR certification, learning how to work with biological parents, how to handle discipline.

The foster/adoption process is the same statewide whether a family goes through a state agency like the Rowan County Department of Social Services or a private agency like Nazareth Child & Family Connection, says Rowan DSS Director Donna Fayko.

She said Rowan DSS cautions foster parents about the “foster to adopt” journey.

The fostering process in North Carolina incorporates what is called “shared parenting,” whereby the foster parent is expected to engage with the biological parent to serve as a mentor, role model, and teacher.

Currently, there are 185 children in custody in Rowan County, Fayko said, with more than 50 percent placed out of the county.

Rowan DSS has 26 licensed foster homes and several in the process. The agency also uses kinship (relatives) as placement providers for children.

After completing classes, the couple will still have to wait for state approval, which could take a month to a month and a half before they learn if they are accepted as foster parents.

Prior to having a child placed in their home, the couple will receive details from a social worker about what special needs the child may have, their history and why they’ve been placed with the private agency.

The couple says their girls — seven, five, and three — are excited to have a brother or sister, even if it’s temporary.

“Our oldest is counting down the days until she gets a new brother or sister,” Amanda said.

The two explained to the girls that the parents of the children who will be in their care can’t temporarily care for them.

Ideally, it would be great to have a child between ages three and eight, but the couple says they are just happy to be able to provide a home for children.

They hope to be examples for their children on how to care for others and not just talk about helping them.

The foster children can come from anywhere within the state. However, there are 40 children in the care of Nazareth & Family Connection, some of whom stay on the campus in Rockwell. There are seven families including Amanda and Dustin Burns who recently completed the certification classes.

The couple’s decision to foster and potentially adopt has been met with positive and negative responses from family and friends.

“It made us want to do this more,” Amanda said.

Dustin said he thinks most people focus on the negative because perhaps they’ve heard about a bad case. The couple has chosen to focus on the good they can do in the lives of children in their care.

The Burnses have a friend who has two children adopted through the foster program. Amanda said it’s been great to see those children — one born addicted to heroin and the other cocaine —  grow into smart, capable children.

Dustin’s sister has a friend who was in the foster care program and later adopted.

One thing that surprised them was the trauma a lot of children in the foster care program have gone through.

The couple admitted they entered this process a bit nervous and purposely didn’t share their journey with too many people.

Dustin and Amanda say they have a heart for children and wanted to become involved in the community in a way that was impactful.

They asked their daughters to draw a picture of what they thought their “new” family would look like and they drew an African-American child. The couple says race isn’t a factor in the child that is placed in their home.

“Race is not a factor,” she said for her family, but it has been met with some trepidation about what it may look like to others.

The two don’t really have any fears because they said they’ve had a social worker with them every step of the way. That person has been Shawn Squirewell, director of Foster Care Services.

Squirewell does the training for the classes and also holds informational meetings in the spring to discuss the process with potential foster families.

She also does home visits and assessments to determine whether fostering is a right fit for a family as well as submits applications to the state.

She urges anyone interest to attend interest meetings that are held every February and August with classes held March and September.

“Start with your desire to help and attend the information session and know there is a commitment with the class,” Squirewell said.

She added that although there’s a need for families to foster children, there is still a need for a thorough assessment and application process.

“Nazareth is good about staying on top of the families,” Amanda said of receiving help from Squirewell.

She said if they have a child placed in their home who is enrolled in an out-of-area school, the agency will have someone transport them to that school.

For more about the Foster Care program through Nazareth Child & Family Connection, contact Shawn Squirewell at 704-279-5556.