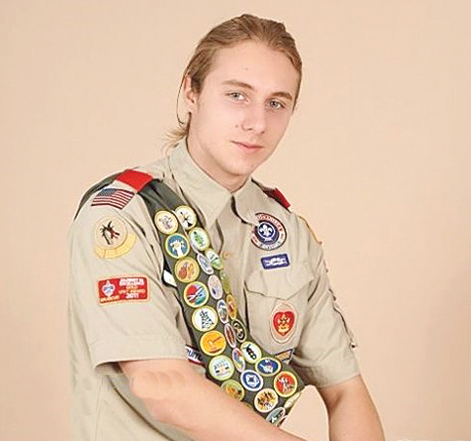 Ethan Kyle Martin Stafford, son of the late Katherine Mercedes Stafford and grandson of Mercedes “Mercy” Stafford has achieved Boy Scout’s highest rank of Eagle Scout as well Bronze, Gold and Silver Palms. Ethan is a member of Boy Scout Troop 443 chartered under St. John’s Evangelical Lutheran Church, its current leadership of David Sides and its previous leadership of Henry Trexler with special mention of guidance by leader and special friend John Drye. His Eagle Project was completed for Main Street Mission of China Grove in May of this year prior to his 18th birthday in June.
Ethan became a citizen of Salisbury upon moving from Tampa, Fla. in 2007. As a new 2nd grader of Salisbury Academy, he began his scouting career as a Wolf Cub Scout in Pack 443 under the leadership of Dave Roof and Dr. Sean Malone. He continued his Cub Scouting career, achieving its highest award, the Arrow of Light. As a Boy Scout he was inducted into Itibapishe Iti Hollo Order of the Arrow, Scouting’s National Honor Society.

Ethan is a 2018 graduate of Jesse H. Carson High School and freshman at Western Carolina University as a student of the School of Stage and Film in Cullowhee. Ethan’s love of acting and story-telling began at an early age using film/video and their production as his favorite medium for school projects and most especially during camping trips with his fellow scouts as actors in their collective created scripts. He earned his BSA Moviemaking Merit Badge by producing a short film for the Central North Carolina Council Popcorn Sale “Kick off” which was shown in the Albemarle Movie Theatre in August 2014. This was a proud achievement for Troop 443 which earned Ethan special recognition as Troop 443’s 2014 Scout of the Year.

Please accept this announcement as an invitation to those who know Ethan and would like to attend the Eagle Court of Honor Service in his honor to be held at First Presbyterian Church, 308 W. Fisher St., Salisbury, on Sunday, Dec. 16, 2018 at 10:30 a.m. in the main sanctuary prior to the 11 a.m. church service. The congregation and guests are invited to share a cake reception following the 11 a.m. service in Lewis Hall, adjacent to the sanctuary.