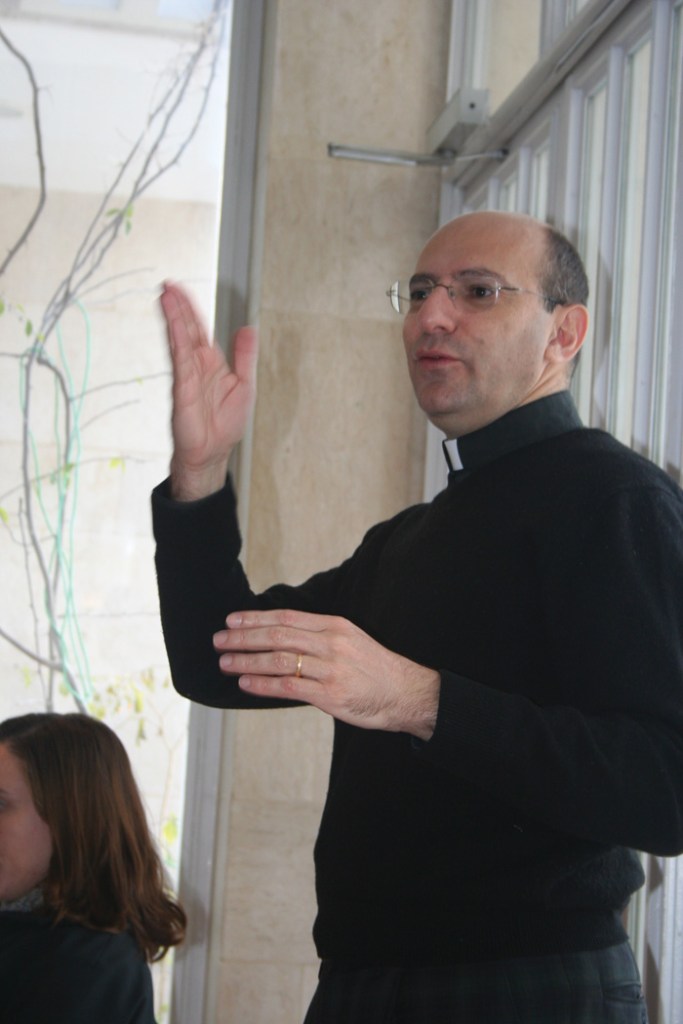 Photo by Susan Shinn Turner The Rev. Dr. Mitri Raheb is former pastor of Christmas Lutheran Church and participates in the simulcast each year. The church and Raheb are longtime mission partners of St. John’s Lutheran Church, which hosts the annual simulcast locally.

By Susan Shinn Turner
Once again in December, St. John’s will host the live simulcast between Christmas Lutheran Church in Bethlehem and the National Cathedral in Washington, D.C.
St. John’s welcomes all in the community to join in this annual worship service at 9 a.m. Saturday, Dec. 15, in the Faith Center. Prayers, readings and hymns, in both Arabic and English, will alternate between Washington and Bethlehem, bringing those of different lands, languages and ethnic backgrounds together in celebration of the birth of Jesus. This is St. John’s fifth year hosting the event. A panel discussion will follow the service.
Holly Zemke is a member of the Palestine Ministry Team. Zemke, who joined St. John’s in June 2017, works part-time at Waterworks Visual Arts Center as its communication and development coordinator. This will be her first simulcast service.
“I’m really looking forward to this,” she said. “Everything seems to be contentious and divisive right now, but there are many people we can unite with in our beliefs. To know that we’re one place around the country hosting this service in which so many Christians will celebrate Jesus’ birth is very hopeful to me.”
In her research about the locales, Zemke found some interesting connections. Christmas Lutheran Church in Bethlehem is the oldest Lutheran church in Palestine, started in 1854 by German missionaries. The church itself was built from 1886-1893. Bethlehem has the honor of being the city in which Christians remember and celebrate the birth of Jesus Christ.
Envisioned in 1791 as “a great church for national purposes,” and chartered in 1893, the foundation stone of the National Cathedral in Washington, D.C., was not laid until 1907. That stone came from a field near Bethlehem, and was set into a larger piece of American granite.
“Isn’t that cool?” Zemke said. “It’s a great metaphor for unity.”
She was also intrigued by the connection between Christmas Lutheran founders and St. John’s founders. She learned that German immigrants founded St. John’s Lutheran Church in Salisbury in 1747. Meeting for years in parishioners’ homes, their first worship structure was occupied in 1768, with two subsequent Salisbury buildings used before the current sanctuary was completed in January 1927.
“St. John’s is older than both of these places,” Zemke notes. “No matter where we are, we are all children of God, and through this service, we get to celebrate that in a very unique way.”
So gather your family and invite your friends to attend what promises to be a most meaningful joining of Christians around the world, just in time for Christmas.