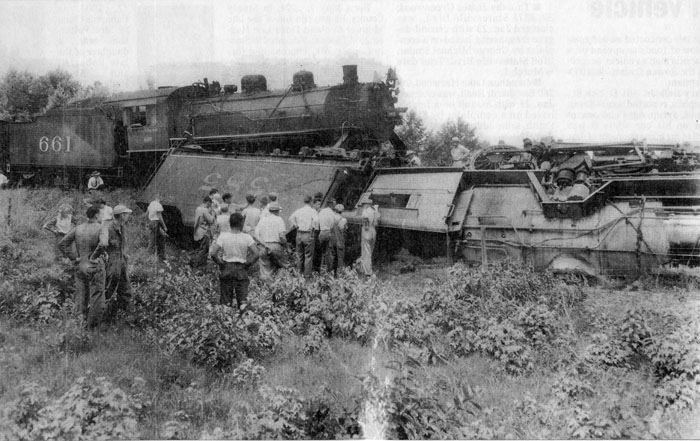 Salisbury Post file photo Railroaders and some local residents gathered near the Stone Road crossing in eastern Rowan County July 13, 1950, after a locomotive derailed close to lunchtime. Three men, including Elbert W. Kluttz, one of the founders of Kluttz Piano Co., died as a result of the accident. 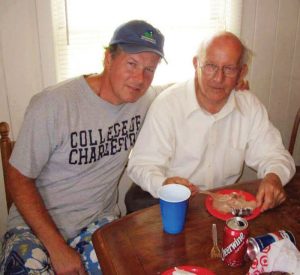 ROCKWELL — As a boy growing up in eastern Rowan County, Banks Kluttz heard only that his grandfather worked for Southern Railroad and had died in a train wreck.

That was supposed to be enough information for a youngster back then.

Kluttz didn’t know where the train wreck had happened, what caused it or or even when it occurred exactly. He never really pressed anyone for more information, figuring his relatives had their reasons.

Banks was grown, gone off to college and back home again when one day he was driving toward the town of Faith with his parents, Ray and Joyce. As they crossed the railroad crossing on Stone Road heading for supper, Ray Kluttz, sitting on the passenger side, motioned to the left side of the car.

“Right there,” Ray Kluttz said, “is where your granddaddy got killed.”

Banks had difficulty comprehending the words at first. Was his dad saying his Grandfather Elbert Kluttz had died less than a mile from where he lived? Was he saying it happened at this crossing, which Banks had gone over hundreds of times in the past?

When he rode the school bus, Banks often had been the kid tabbed by the driver to exit the bus at the Stone Road rail crossing and go through the formality of looking both ways down the tracks to give the OK for proceeding.

It was called “running the track.”

From the back seat, sensing her then 26-year-old son’s difficulty in grasping the revelation, Joyce Kluttz tried her hand at damage control.

“Banks, don’t ask Daddy a bunch of questions,” she said. “He doesn’t like to talk about it.”

But Ray Kluttz waved his wife off this time and said it was all right. The narrative Banks heard next — this was almost 40 years ago — is something he’ll never forget.

It’s a story, he says, “full of ironic twists and fateful decisions.”

Early on the morning of July 13, 1950, Elbert W. Kluttz, a freight train conductor for Southern, had finished a run in Greenville, S.C.

Rather than wait on the train he normally would have taken back home to Rowan County, Kluttz hopped on Engine 585, the lead of two locomotives that were pulling nine cars of rock. It was heading for Albemarle, which would require branching off onto the Yadkin line in Rowan County.

Kluttz planned to jump off during a stop in Rockwell.

In effect, Kluttz was hitching a ride and enjoying the conversation with Engine 585’s four-man crew. His fellow railroaders knew Kluttz by the nickname “Ebb.”

No one back home knew Ebb Kluttz would be getting back so early.

Ray Kluttz worked that morning at the family business, Kluttz Music and Furniture Co., which his musically inclined father had founded with his brothers in 1931, while continuing to work for the railroad.

The growing business was located along Highway 52 between Granite Quarry and Rockwell, eventually evolving into today’s Kluttz Piano, overseen by Banks’ brother Jonathan.

Ray, who had returned home from a couple of years at Owosso Bible College in Michigan, already was in love with Joyce, but any plans they had to marry would have to wait until Joyce finished nursing school in Cabarrus County.

With tensions increasing in China and Korea, military service also loomed ahead for Ray, whose brother Paul already was in the Army.

Even at 23, Ray walked on eggshells around the house when his dad was home from his railroad job.

Elbert Kluttz attended Christiana Lutheran Church with the rest of the family. “But he had a bit of the German temper and apparently liked to partake from the bottle perhaps a bit much at times,” Banks says.

“And from some of the stories that were told, he was not afraid to do a little brawling.”

More and more of the responsibilities at Kluttz Music and Furniture were falling to Ray Kluttz, but his dad still had the final word.

Stone Road was a dirt road back in 1950. A lone motor-grader operator, Guerney Simpson, had spent the morning of July 13, 1950, scraping the road and filling in washed-out spots.

Summer rains often pushed dirt and gravel over the railroad tracks, and Simpson also spent time on the Stone Road crossing, trying to smooth things out.

A newspaper account would say the road scraper had “pushed a pile of dirt onto the tracks and did not have time to clean it off before the sound of the train whistle warned him to get off the tracks.”

Engine 585 came around the curve ahead of the Stone Road crossing and hit the mound of dirt at about 25 mph. About 30 feet from the crossing, the lead engine slipped off the tracks and down an embankment, turning onto its side.

A fifth man, a fireman, had jumped off the engine as it headed down the embankment. The second locomotive with an engineer and brakeman derailed but stayed upright.

Back at the music and furniture store, Ray Kluttz decided to head home for lunch. As he drove on Stone Road toward the crossing, Ray came onto a chaotic scene.

Steam rose from the wreckage. The first passersby were out of their cars, and Ray raced to help those already trying to pull the injured men from the overturned engine.

Ray assisted in carrying the men to private cars so they could be rushed to the Salisbury hospital.

It was later, while he was still at the scene, when Ray heard someone mention that one of the injured men was Ebb Kluttz, his father.

“He had unknowingly helped to lift his own dad from the wreckage of the train and carry him to a car,” Banks Kluttz says.

The grimy, scalded Elbert Kluttz had not be recognizable to his own son. Plus, he just wasn’t supposed to be on that train.

Ray Kluttz turned his car around and sped toward Rowan Memorial Hospital in Salisbury.

His mother, Addie Kluttz, was visiting a sister in the country that day, so Ray put off trying to get word to her for the moment. At the hospital, a nurse led him down a hall and into his father’s room.

Ray figured his dad already was heavily sedated with morphine. As he recounted for Banks years later, Ray walked over to Elbert’s bed and still barely able to recognize him asked how he was doing.

Elbert opened his eyes and looked straight to the ceiling.

Ray Kluttz told Banks those might have been the last words Elbert ever said.

He eventually slipped into a coma as Addie Kluttz stayed by his side through the night.

Elbert Kluttz died at 5:45 the next morning at age 53. Heilig, the engineer, died the previous night, making the total death count three at the small country crossing.

The Salisbury Post reported that thousands visited the accident scene.

In 2014, some 64 years after the accident, a woman walked up to Banks Kluttz one Sunday morning at Christiana Lutheran Church and said she remembered the train derailment.

She was 19 at the time, and she had accompanied her parents and sister to Stone Road that day to get a glimpse of the wreckage. The woman told Banks “it was horrible, just horrible.”

She also carried an image from the wreck that she would never shake.

“It was what appeared to be two gloves that had been burned into the glass of the cab,” the woman said. “When we looked at it close, Daddy said that it wasn’t gloves. It was the skin burned off of one of the men who had been scalded so badly.”

Even all these years removed from the accident and having never known his grandfather, Banks says “a pain of hurt and sadness shot through my heart.”

“Was that my grandfather’s?” he asked himself.

Though he had tried to learn more about the train wreck from his father in his later years, Banks filled in a lot of the gaps soon after Ray’s death by reading newspaper microfilm in the Rowan Public Library’s History Room.

“I tried to close my eyes and imagine those seconds as the train hit dirt and started falling sideways down the embankment,” Banks says. “What thoughts went through my grandfather’s mind? Did he think of death? Did he think of family? Of his home that sat less than a half-mile away?

As Banks read the newspaper accounts, he came across one more bit of information about his Grandfather Elbert he had never been told.

Again, two locomotive were pulling the cars. Again, it was a train Ebb Kluttz wasn’t supposed to be on. He rode as an extra on what was called a “peach train” that derailed in Gold Hill several miles southeast of the Stone Road crossing.

Again, Kluttz was riding in the cab. Here’s what the newspaper recounted of the 1930 wreck after Elbert died in the 1950 accident.

“At Gold Hill, the ill-fated peach train, a doubleheader just as was yesterday’s, was derailed because flangeways at a crossing were filled with dirt washed there by a heavy storm.

Banks Kluttz did some figuring and realized his own father would have been 2 at the time. He wondered what kind of pressure it put on his grandparents’ young family. He asked himself, “What physical and emotional pain could Granddaddy Kluttz have been dealing with all of those years?”

It was exactly five years ago today that Ray Kluttz died.

The following summer his surviving family members were going through the old home place, sorting through this and that.

At one point, Banks pulled down the stairs leading to the attic. He made a quick look around but decided a closer inspection would have to wait until cooler temperatures in the fall.

Before he left, Banks spied a trunk covered by blankets. Opening it, he found hundreds of letters — 750 letters, to be exact — and most were written between his mom and dad. Some while she was off at nursing school. Others while he was off with the Army.

“It took a long time to read them all,” Banks says, but the letters offered him insights into the enduring romance of his parents and their loyalty to one another. He also read more about Elbert Kluttz.

“For my entire life, I have missed a grandfather that I never got to meet,” Banks says. “He never picked me up and tossed me skyward to shrieks of laughter. Never took me for a ride on his shoulders. Never bought me candy at K&L Grocery down the street.”

Since reading the letters and looking at old newspapers, Kluttz has been writing a lot of things down for his family to have in the years ahead.

He thinks they should know.