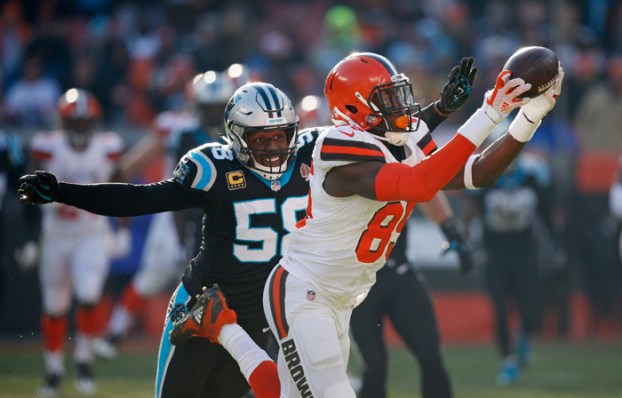 CLEVELAND (AP) — Baker Mayfield took the snap in victory formation and dropped to one knee. The cocky rookie quarterback urged the crowd to make more noise, and when the clock hit zeroes, the stadium’s sound system blasted “Danger Zone.”
The Browns have become hazardous to your playoff health.
Mayfield outplayed Cam Newton, Jarvis Landry caught a touchdown pass and ran for another score and the Cleveland Browns damaged Carolina’s postseason hopes with a 26-20 win Sunday over the Panthers, who dropped their fifth straight.
Mayfield bravely threw a 51-yard TD pass into traffic to Landry, who had a 3-yard scoring run and added a long run — on a similar call — early in the fourth quarter to set up a go-ahead touchdown.
Playing the spoiler role down the stretch, the Browns (5-7-1) kept their faint playoff hopes alive while improving to 3-2 under interim coach Gregg Williams, who needed just five games to match former Browns coach Hue Jackson’s win total over two-plus seasons.
“Everybody loves winning,” said defensive end Myles Garrett. “It’s different for us because of the negatives we’ve been through, but that’s all in the past.”
Mayfield finished 18 of 22 for 238 yards, continuing his bounce back after throwing three interceptions in the first half last week at Houston. The brash No. 1 overall pick continues to develop and the Browns are growing with him.
Mayfield was asked if he woke up feeling as dangerous as he did three weeks ago before beating Atlanta.
“I think you know the answer to that one,” he said, drawing laughter.
Landry felt that way, too.
“I guess waking up feeling dangerous is contagious,” he said. “We pulled together as a team.”
There were no smiles or laughs in Carolina’s locker room as the Panthers (6-7) suffered a loss that could haunt them for months and will increase the heat on coach Ron Rivera.
Newton passed for 265 yards, but overthrew Jarius Wright on 4th-and-goal at the 3 with 2:35 left. Carolina got the ball back, but Newton, who has been playing with a sore right shoulder, badly missed Devin Funchess and was intercepted by Damarious Randall with 57 seconds left.
Following the game, a glum Newton didn’t offer any excuses.
“We’re done with the cliche sayings, it just comes down to doing our jobs,” Newton said. “I’m not talking about nobody but myself.”
Carolina came in just a half-game out of the second wild-card spot in the NFC, but with only three games left, including two against New Orleans, the Panthers are going to need help to make the postseason.
Christian McCaffrey had two TD runs for Carolina and finished with 101 total yards.
“It stinks,” McCaffrey said. “A lot of people are against us right now, but I’ll fight for every one of these guys. That’s exactly what I’m going to do and I know a lot of guys will do as well. We lost. We’ve lost a few in a row. It’s kind of us against the world right now.”
Browns rookie Nick Chubb scored on a 1-yard run to give the Browns a 23-20 lead with 13:05 left. The score came one play after Landry took an inside handoff and weaved his way down field. Greg Joseph clanged the extra point off the left upright, keeping the Panthers within three.
Newton drove the Panthers to the 3 before throwing two straight incompletions, ending Carolina’s best chance to take the lead.
Mayfield’s 51-yard TD pass to Landry tied it 14-all with 8:27 left in the second quarter.
Rolling left out of the pocket to buy some time, Mayfield stepped up and confidently delivered a perfect strike to Landry, who was well covered on the play by safety Eric Reid, his former LSU teammate. As fans celebrated, Landry and several teammates sat down in the end zone’s corner and pretended to warm themselves around a camp fire.
“It was cold outside,” Landry said, smiling.

FAST START
On Cleveland’s first play, Mayfield unloaded a pass that traveled more than 60 yards in the air to wide receiver Breshad Perriman for a 66-yard pickup. Two plays later, Landry scored on his short run.

HOME SWEET HOME
The Browns improved to 4-2-1 at FirstEnergy Stadium, clinching their first winning home season since going 7-1 under coach Romeo Crennel in 2007.
“That’s pretty cool because the Dawg Pound has always been loyal to us,” said guard Joel Bitonio, who has spent all five of his NFL seasons with the team. “We want every team to say, ‘We don’t want to go to Cleveland to play.'”

NEWTON’S LAW
With his first completion, Newton eclipsed 3,000 yards passing for the eighth straight season. He came in needing 1 yard to reach the plateau and surpassed it on a 25-yarder to Curtis Samuel on Carolina’s second snap.
Newton joined Peyton Manning as the only quarterbacks in history to reach 3,000 yards in each of their first eight seasons.

ROOKIE RECORD
Mayfield joined Kurt Warner (1999) and Brad Johnson (1996-97) as the only players since 1966 to throw at least one TD pass in each of their first 10 career starts.

INJURIES:
Panthers: No significant injuries.
Browns: C JC Tretter barely made it off the field in the third quarter before dropping to his knees. Tretter, who has played several weeks with a severely sprained right ankle, returned to the game.

UP NEXT
Panthers: Host New Orleans on Sunday.
Browns: At Denver on Saturday.