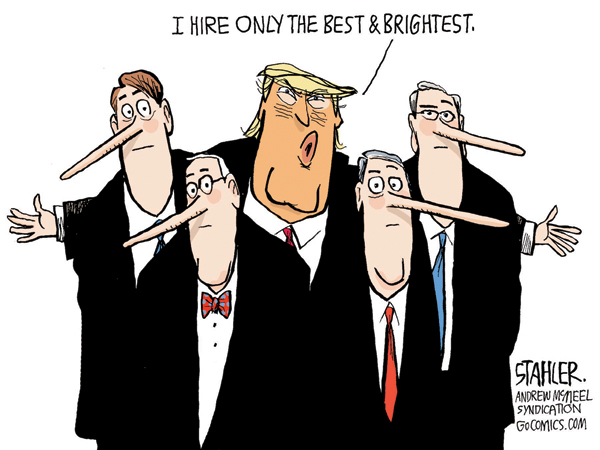 Gene Lyons: As lies are revealed, the herd will wise up 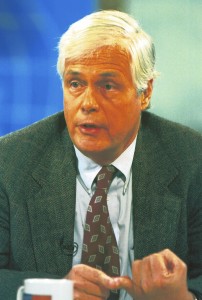 Some years ago, I watched a herd of nine mares stampede across a pasture on a friend’s farm. It was an impressive spectacle, like leaning on the rail at a racetrack. Because I fed them regularly, I knew them well. As they thundered by, the two youngest animals at the rear kept looking backward and making eye contact as if to say, in horse-speak, “What the hell are we running from?”

About the time the stragglers pulled up, I watched the head mare gallop into a run-in shed. Apparently the whole herd was fleeing a big biting fly on her rump. (Horseflies avoid moving into shadows.) Anyway, that’s how horses work. When one runs, they all run. Until the ones at the rear no longer sense danger. Then everybody settles down.

Humans aren’t so different. The 19th-century Scottish author Charles MacKay put it this way in his classic book, “Extraordinary Popular Delusions and the Madness of Crowds”: “Men, it has been well said, think in herds; it will be seen that they go mad in herds, while they only recover their senses slowly, and one by one.”

Another way of putting it is that the political figure designated as “Individual 1” in Michael Cohen’s guilty plea for lying to Congress last week probably has all the supporters he’s ever going to have. By now, smart Republicans have to be catching each other’s eyes. After enough quit galloping, the stampede will peter out.

Nobody knows exactly how the story’s going to end, but it’s surely significant that White House spokeswoman Sarah Huckabee Sanders has switched from saying there was no collusion with the Russian government during the 2016 campaign to emphasizing that the president wasn’t personally involved.

Big difference. And she’s said it several times, so it’s no accident.

Meanwhile, Individual 1 has taken his customary prevarication to operatic heights. Following Cohen’s plea bargain for lying to Congress about his scheme to build a Trump Tower in Moscow, the president called it common knowledge. “This deal was a very public deal,” he said last week. “Everybody knows about this deal. I wasn’t trying to hide anything.”

Oh really? Both during and after the 2016 campaign, while Michael Cohen was secretly negotiating with the Putin government on Individual 1’s behalf, he repeatedly denied having any Russian business interests whatsoever.

Washington Post reporter Meg Kelly has compiled an encyclopedic list. For example, although he’d signed a letter of intent to proceed with the Moscow plan during the GOP presidential debates, he tweeted a categorical denial in July 2016: “For the record, I have ZERO investments in Russia.”

Stung by Hillary Clinton’s depiction of him as a Russian puppet, he told an Oct. 26 campaign rally that “I don’t know Putin, have no business whatsoever with Russia, have nothing to do with Russia.”

None of these statements was even remotely truthful.

Rep. Adam Schiff, incoming chairman of the House Intelligence Committee, puts it this way: “At the same time candidate Trump publicly urged sanctions relief for Russia, he was privately putting together a business deal in Moscow that required lifting U.S. sanctions. Then President Trump and his confederates misled the country about it, in a way that left him compromised.”

You swat the fly on Individual 1’s back, he swats yours.

Somebody who wasn’t misled, however, was Vladimir Putin, more accurately described as the boss of an organized crime cartel than the lawful president of Russia. Cohen, see, was negotiating directly with Dmitry Peskov, Putin’s personal assistant. So Putin had Individual 1 by the short hairs all along. All the Russians ever had to do was release “Trump Tower” documents in their possession to do Individual 1’s campaign grievous political harm.

And Individual 1 definitely knew it, as his obsequiousness to the Russian dictator has shown. Instead, Putin put the Russian intelligence apparatus to work attacking Democratic nominee Hillary Clinton. Alas, soon after Russian operatives met in Trump Tower secretly promising to “incriminate Hillary” as part of “Russia and its government’s support for Mr. Trump,” the scam fell apart.

The press first learned of the deal’s existence in August 2018. But Vladimir Putin still had the president by the short hairs, and acts as if he still does.

And that’s just one of the things Individual 1 is fleeing from.

As your gift list grows this Christmas, take comfort in knowing about a very big gift the Salisbury community is... read more