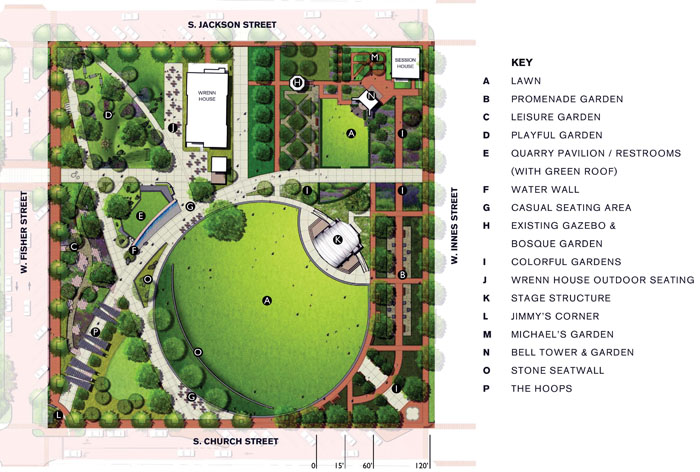 As your gift list grows this Christmas, take comfort in knowing about a very big gift the Salisbury community is about to give itself: the Bell Tower Green. Fundraising for the West Innes Street park has a distance to go, but the way the park and other projects are coming together point to a renaissance of sorts for Salisbury.

The city — in fact, the entire county — is poised for a rebirth.

The iconic Presbyterian Bell Tower at the corner of Innes and Jackson streets anchors the future park, which will gradually take up the entire city block. Work begins in the spring, and donors are eager to see it get started. Including the purchase of the land from the Maxwell Chambers Trust, creating the park is estimated to cost $12 million. If that makes you gasp, consider this: Some $9 million has already been lined up from 71 donors, along with grants from the city and state. A communitywide campaign to raise the rest is planned.

At the same time, the redevelopment of the Empire Hotel is coming together, downtown apartment life flourishes, the O.O. Rufty Building has been transformed,  and Healthcare Management Associates is preparing to build offices and apartments in the 200 block of East Innes.

Miles away, a commercial development being talked about in southern Rowan could had more than $500 million to the county’s tax base. Kannapolis has agreed to run water and sewer lines to the 318-acre High Bridge tract off Old Beatty Ford Road. The road itself is getting an I-85 interchange with a five-lane bridge. In addition to commercial and residential growth, the area will also see another Novant Health facility, an ambulatory care center, and a higher profile for the county.

Meanwhile, commissioners are courting prospects for other parts of the county, including a possible e-commerce distribution center off Long Ferry Road that could employ hundreds.

Perhaps most significant is Rowan’s progress on education. Test scores are not stellar, but Rowan-Salisbury’s status as the state’s first and only renewal school district gives the system new leeway. Teacher-led teams are finding their voice and suggesting improvements. At the same time, the system is exploring consolidating some schools. So far the proposed plan is just a conversation starter, but the new West Rowan Elementary School could convince skeptics that change can be a good thing.

Community solutions don’t come in pretty boxes tied with bows. They require planning, collaboration, vision, patience and, where appropriate, philanthropy. We have all that right here in Rowan County. Instead of a gift list, put this renewed vigor on our list of blessings. Good things are happening. Hallelujah.