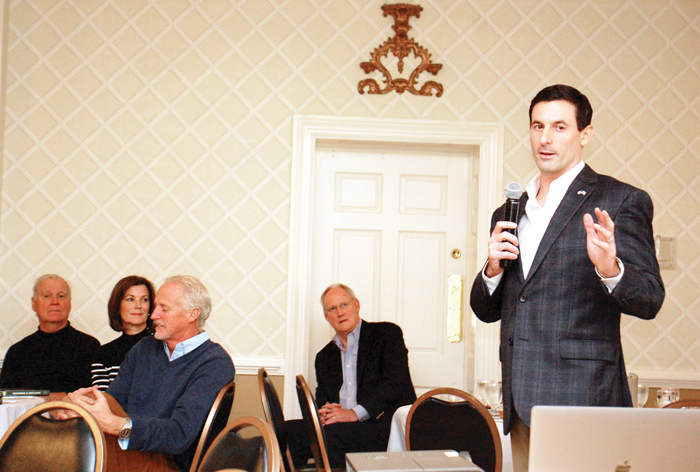 Mark Wineka/Salisbury Post Army Maj. John Tramazzo, right, talks about whiskey's connection to the military during a presentation at the Country Club of Salisbury.

Over the past four-plus years, Tramazzo interviewed, researched, traveled and tasted his way through the history of bourbon (and whiskey, in general) focusing on how it has related to American wars, the men and women who served in the military and the connections many of today’s distilleries have to veterans.

It all led to his recent book, “Bourbons & Bullets,” published by the University of Nebraska Press.

On Dec. 1, a large crowd attended his presentation, whiskey-tasting and book-signing at the Country Club of Salisbury, made possible by Tramazzo’s in-laws, Dr. Robert and Lynn Bertram.

At the tables were ham biscuits, cheese straws, Chex mix, bourbon-ball desserts and glasses of water for mixing or cleaning the palate. Also at each place setting were three whiskeys to sample.

Tramazzo led his audience through the tasting of each, soliciting their impressions and also noting how the companies which produce those spirits have military connections.

Since marrying Mary Dudley Bertram close to nine years ago, Salisbury has become an adopted hometown for Tramazzo, who grew up in Washington, D.C. An attorney, he is currently serving in the judge advocate general’s office at Fort Bragg.

The Four Roses, which has made a dramatic comeback in recent years, has roots that go back to Paul L. Jones Jr., who served in the Confederacy during the Civil War.

With the 33rd Tennessee Regiment, Jones fought in the battles of Shiloh and Chickamauga and was among the Confederate forces trying to repel Union Gen. William T. Sherman’s siege of Atlanta.

Not long after the war was over, Jones began rectifying whiskey in the area around Atlanta. He moved to Louisville’s “Whiskey Row” by 1884 and became president of the J.G. Mattingly Distillery.

Historians credit him with registering the Four Roses trademark in 1888. Tramazzo reports that today Four Roses sells nearly a million cases of bourbon each year.

In connection to Stranahan’s Colorado Whiskey, Tramazzo mentioned the military career of Rob Dietrich, hired as the company’s master distiller in 2011.

Dietrich served in the 10th Mountain Division based out of Fort Drum, New York — an outfit Tramazzo also has served with.

Dietrich was stationed in Mogadishu, Somalia, during the famous “Black Hawk Down” fight of Oct. 3-4, 1993. In 1994, Dietrich was part of a security force in Haiti during Operation Uphold Democracy.

“His fascination with fermentation and alcohol began as a young soldier when he tried to convert Army-issued Kool-Aid into wine in Somalia,” wrote Tramazzo, who had several interesting conversations with Dietrich for the book.

Stranahan’s actually is named for George Stranahan, an Army veteran from the mid 1950s.

The Bulleit distillery in Kentucky goes back to attorney and Vietnam War veteran Thomas Bulleit. It also sells nearly a million cases of whiskey a year and opened a $115 million facility in Shelbyville, Ky, in 2017.

As a Navy petty officer attached to the First Marine Division, Bulleit was in the midst of some of the heaviest action in the Vietnam War.

In researching his book, Tramazzo seemed to find strong military connections with whiskey in most every corner, and “Bullets & Bourbon” shows how conflicts from the Revolutionary War to present day strongly relate to whiskey.

Revolutionary War soldiers were given 4-ounce daily rations of whiskey.

And did you know George Washington, maybe the country’s most famous general, also had become his young nation’s most prominent whiskey distiller before his death in 1799?

Today, that distillery has found a rebirth on the Mount Vernon grounds.

Tramazzo is quick to add a disclaimer. While he enjoys whiskey, is a Kentucky Colonel and even writes a blog (bourbonscout.com) about it, he says no one should ignore the fact that it has been and always can be destructive when abused.

“No group understands that reality more than veterans of  war do,” Tramazzo wrote in the introduction to his book. “I was proud to discover that a veteran who took his first sip of liquor as a new lieutenant in the U.S. Army founded Alcoholics Anonymous in 1935.”

Jim Beam comforted a lot of soldiers in Vietnam, Tramazzo said in Salisbury, but it also destroyed a lot of lives afterward.

In Washington, Tramazzo attended the all-boys Catholic school Gonzaga, which was about two miles from the Pentagon. From his high school on I Street during the Sept. 11, 2001, terrorist attacks, Tramazzo could see black smoke rising from the Pentagon.

“It changed my life,” he said.

Tramazzo joined the ROTC at the University of Richmond and was commissioned as an Army lieutenant in 2007. Over time and education, he eventually joined the Judge Advocate General’s office.

Tramazzo was deployed several times to conflict zones overseas and witnessed “unspeakable violence,” he says in his book.

Tramazzo’s journey to becoming a whiskey enthusiast started when he did the Kentucky Bourbon Trail with the Bertrams.

In the acknowledgements to his book, Tramazzo thanks the Salisbury couple: “Robert and Lynn Bertram believed in the project from the beginning and provided me with all of the books and bourbon I needed to turn an interesting idea into a manuscript.”

All bourbon is whiskey, but not all whiskey is bourbon. To be bourbon, the whiskey must be at least 51 percent corn whiskey, aged in a new charred oak barrel and produced in America.

Tramazzo says 90 percent of the country’s bourbon is made in Kentucky, but thanks to the burgeoning number of craft distillers, bourbon is now being produced in 49 of the 50 states.

Hawaii is the exception.

Tramazzo met his wife, Mary Dudley, in Spanish class at the University of Richmond. On the day of their graduation, Tramazzo arranged for that classroom to be opened, and it was the spot in which he proposed marriage.

The Tramazzos have two children, Robbie and Mary Grace.