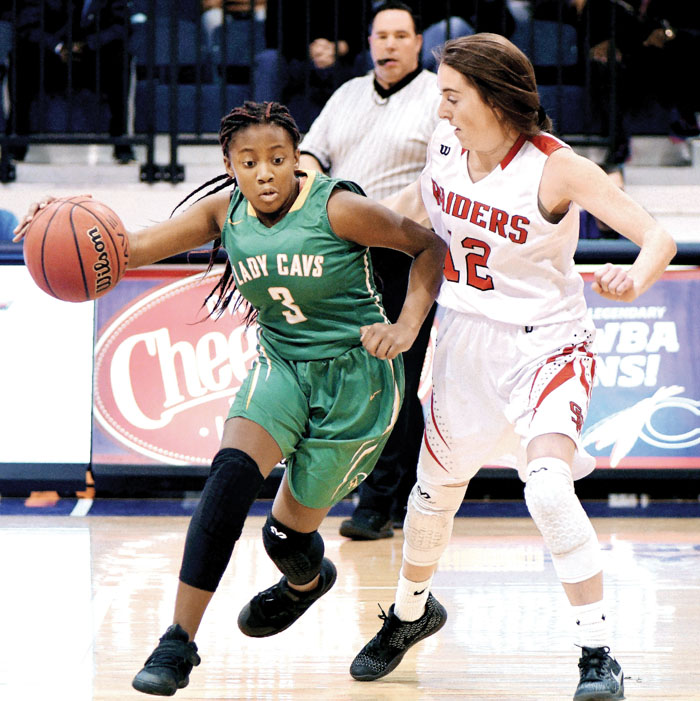 SPENCER — It’s four games into the girls basketball season and North Rowan is already behind in the count.

Friday’s mistake-filled, 63-57 loss to visiting Albemarle may have turned into a better-than-advertised feature, but it left the Cavs 1-3 after four outings.

“My girls have been working hard in practice,” first-year coach Lamar Wilkerson said, after North dropped its Yadkin Valley Conferece opener. “They just wanted to showcase that they can play some good basketball.”

They played their best in the opening and closing periods. North scored the game’s first seven points and led, 9-2, when freshman Hannah Freeman navigated the right baseline and hit a layup just three minutes in. Teammate Natavia Taborn scored eight fourth-quarter points as the Cavs trimmed a 15-point deficit to five on two occasions.

“We put up a fight, that’s for sure,” Taborn said, after scoring 17 points. “They probably thought they would come out and blow us out, but we stuck to our ballgame. We’ve just got to work a little harder.”

Albemarle (5-0, 1-0) first took control of the game with a 13-0 scoring spree that started midway through the first quarter. By halftime, the guests sat atop a 33-22 cushion.

“We’ve been beating people by 30 points,” boasted winning coach Eric Davis. “But North came out and battled us. I’m thankful we won because they have a chance to be a good team. Games like this, you find out what you need to work on.”

The Bulldogs need to work on throwing a knockout punch. Their lead bulged to 52-37 when senior guard Armani Baldwin sank two free throws early in the final period. “After we became discombobulated, we started playing team ball,” said Freeman, the game’s high-scorer with 24 points. “Then, we showed what we can do.”

The Cavs responded with an exciting push to the final horn. Freeman and teammate Makiya McDaniel scored on back-to-back bull-rush layups, drawing North within 54-45, with 4:51 to go. Later, Taborn found a seam down the lane for a layup before freshman Kimya Lynch took a lovely bounce pass from Freeman and scored, reducing the deficit to 56-51, with 1:46 remaining.

Down the stretch, Albemarle got a huge bucket from senior Zycoria Tillman and converted its last five free throws.

“The game changed off our turnovers and missed opportunities from the foul line,” Wilkerson said, after North suffered 33 turnovers and shot just 13-for-29 from the free throw line. “We’ve got to keep practicing and trying to get better.”