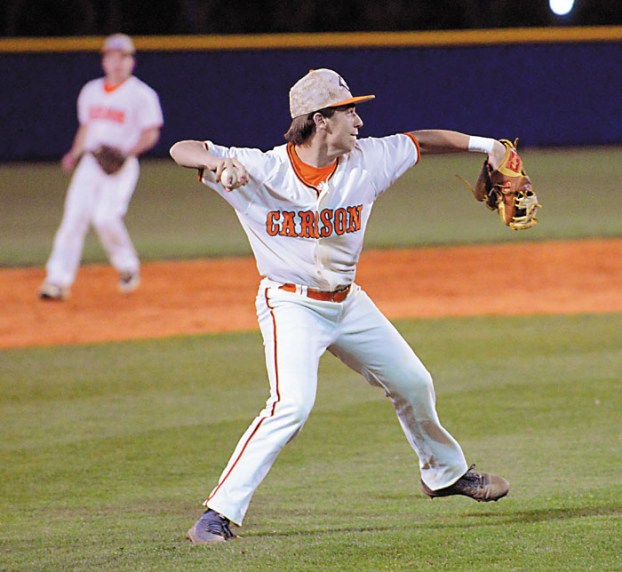 Wayne Hinshaw file photo/for the Salisbury Post ... Carson third baseman Cole Hales makes a throw to first base during a game last season against East Rowan. Hales has announced that he will continue his education and baseball career at Coker College. 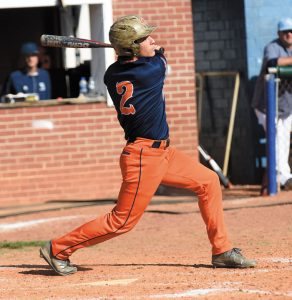 It might be Carson senior Cole Hales, who has started hitting baseballs over fences.

“We’re going to need Cole and Luke to be really good, and we’re confident they will be because they’ve worked their tails off since last season,” Carson head coach Chris Cauble said. “Cole is going to surprise people as a pitcher. The summer that the Carson Junior Legion team went to the state tournament, Cole went 12-0.”

Hales hit and pitched well enough for the Charlotte Megastars travel team in the summer and fall that he received an offer from Coker, a Division II program in Hartsville, S.C., that competes in the South Atlantic Conference with Catawba, Wingate and Lenoir-Rhyne, among others. Hales signed with Coker in November.

“They came to see me play in the fall and started recruiting me,” Hales said. “They recruited me as an infielder, with second base being my most likely college position. I liked the school a lot when I visited, and I decided to go ahead and sign.”

Cauble’s earliest memories of Hales go way back, to before Carson even opened. Cauble was the West Rowan coach then, and Hales couldn’t have been more than 4 or 5. But he remembers seeing Hales hitting and throwing with his dad, Rob, at KidSports in Salisbury.

Hales has always been small, but his work in the weight room has started to show up. He’s noticeably bigger than last season. He’s listed now at 5-foot-9, 165 pounds. He’s emerged as a steady double-figure scorer for Carson’s basketball team this season after paying a lot of dues on the jayvees and on the bench.

“He’s always been that undersized kid who had to work extra hard,” Cauble said. “Now he’s started to grow physically. You’re going to see him hit with power to all fields next season. He hit three or four homers in the fall.”

Hales hit several balls to the fence for doubles for Carson as a junior, but to see balls going over the wall was a thrill.

“I’d come close, but I hadn’t hit one out since Little League, so it really was a good feeling,” Hales said.

Hales’ biggest contributions to Carson baseball last season came on defense. He played third base, a new position for him. He’s always been a second baseman or shortstop when not pitching.

“We asked him to try it, and he made himself into one heck of a defensive third baseman,” Cauble said. “During BP, he didn’t go shag fly balls. He stood in really close at third base, working on his reactions. It didn’t automatically happen for him. He just worked really hard to master a new position and got really good at it.”

Hales’ diligence at becoming a strong third baseman said a lot about him, but that’s how he approaches everything.

He’s worked hard enough to land a college scholarship. His best baseball days are definitely ahead of him.

“He’ll be successful because of his competitiveness,” Cauble said. “Wherever he’s playing, he’s going to give you everything he’s got and he plays to win.”

College baseball: East’s Jason Foster is a Hall of Famer