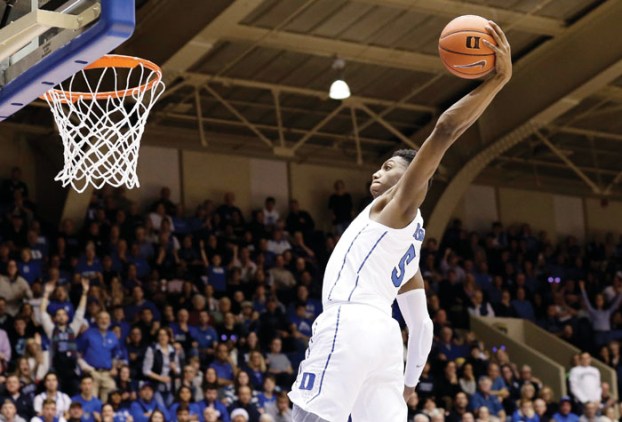 AP Photo/Gerry Broome ... Duke’s RJ Barrett drives for a dunk against Yale during the second half of a college basketball game in Durham, Saturday. Duke won 91-58.

Yet coach Mike Krzyzewski also sees a group that is improving steadily, including with the defense that harassed Yale with turnover-forcing pressure Saturday.

“They listen and they want to do what we want them to do,” Krzyzewski said after a 91-58 win. “We’re better. If we stay healthy, we’re going to get better because they have good attitudes, they have great chemistry, they believe in us, I believe in them.

“We’ve got all the intangibles. We just have to get the experience of playing.”

Freshman RJ Barrett had 30 points, seven rebounds and six assists for the Blue Devils (9-1), who blew the game open in the second half.

Duke led 41-32 at halftime but hit its first six shots after the break to finally stretch out the lead. Duke shot 57 percent after halftime and cracked 90 points for the sixth time in 10 games despite shooting just 5 of 21 from behind the arc.

And yes, there were a few crowd-wowing moments from freshman Zion Williamson, including chasing Alex Copeland in transition to swat a shot and catching a lookahead pass to throw down a rim-rattling slam late. But Krzyzewski was more interested in how Duke extended its pressure to force the Bulldogs to start their offense further and further from the basket.

It unleashed Duke’s defenders to deny passes and create turnovers. It forced ballhandlers to take extra dribbles to reach the paint, which bought an extra second or two for the Blue Devils’ helpside defense to slide into position.

“Our guys are learning this type of stuff,” Krzyzewski said.

The result? Yale (4-3) shot 35 percent and committed 23 turnovers that the Blue Devils converted into 24 points.

“I thought our defense was there in both halves,” said Williamson, who had 20 points. “I feel like we just weren’t sharp (before halftime). We were just playing hard but not sharp. We were kind of playing sloppy with it. I feel like once we sharpened up, we were fine.”

Miye Oni had 12 points and nine rebounds before fouling out for the Bulldogs, who missed 20 of 23 3-point tries — including all 13 after halftime.

“I didn’t think we did a great job of (maintaining composure) at times and that really hurt us,” Yale coach James Jones said. “They went on a couple of runs and because of our lack of poise and composure, that hurt us.”

Yale: The Bulldogs already had two power-conference wins, first by beating California in the Pac-12 China game to open the season and then by beating Miami on Dec. 1. But they couldn’t add another win to that total despite hanging within reach throughout the first half, finishing with a season-low shooting total after shooting at least 48 percent in each of the first six games.

Duke: The Blue Devils head into an extended exam break off yet another lopsided win. They had their only true tests in the Maui Invitational, where they beat No. 8 Auburn by six before losing to now-No. 1 Gonzaga in the title game. Otherwise, they haven’t played a game closer than 21 points, including that dazzling opening-night romp against Kentucky.

Duke got a scare when freshman point guard Tre Jones came up limping with an apparent left leg injury after a scramble for a loose ball. He hobbled to the bench with about 14 minutes left. He re-entered the game at the 9:11 mark only to immediately exit 13 seconds later and head straight to the tunnel.

He later returned to the bench but didn’t play again.

Krzyzewski said Jones took a hit in the quad and might have also banged knees with someone but should be OK — good news for sure, considering Jones’ on-ball pressure is critical to making Duke’s defense work at its peak.

Barrett became the first Duke freshman to have at least 30 points, five rebounds and five assists in a game. He also has 242 points through his first 10 games, the most of any freshman in program history.

By Mike London mike.london@salisburypost.com CHINA GROVE — The biggest surprise in Rowan County baseball next spring? It might be Carson... read more