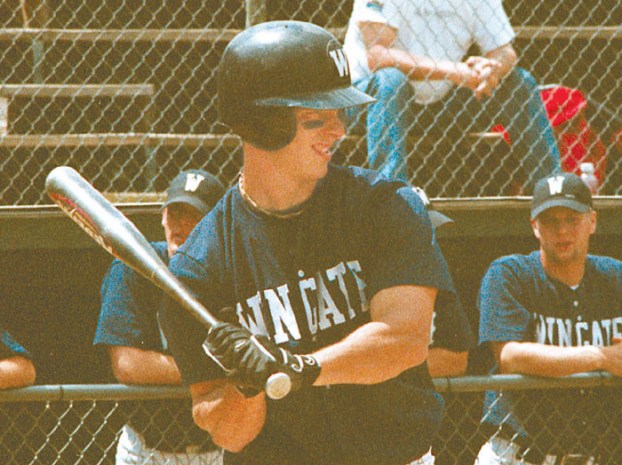 College baseball: East’s Jason Foster is a Hall of Famer 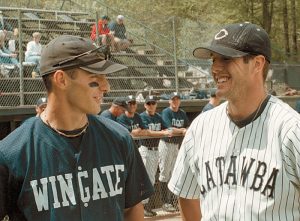 James Barringer file photo/Salisbury Post …
East Rowan High School teammates Jason Foster, left, and David Trexler, chat prior to playing against each other for Wingate and Catawba, respectively, in 1999. Foster was recently inducted into Wingate’s Hall of Fame.

ROCKWELL —  It’s been a great couple of months for East Rowan alum Jason Foster — with the birth of his second son coming shortly after his induction into the Wingate Sports Hall of Fame.

In 1995, his senior year at East Rowan, Foster played on what many believe was the best high school baseball team in county history. East went 29-1 and shut out Asheboro twice to win the 3A state championship. East’s only loss that season was to  Providence in an Easter tournament. Providence won the 4A state championship.

East finished that season on a 16-game winning streak. The Mustangs slammed 36 homers, stole 64 bases and frequently had brilliant pitching. Eight players had 20 or more RBIs.

Foster, the center fielder and leadoff man, was an exceptional player in 1995, batting .462 with 45 runs scored and 24 RBIs. He had 11 doubles, four triples and six homers as the catalyst for a fearsome lineup that included sluggers such as Travis Goins, David Trexler, Chad Yates, Brad Rye, Mike Morris, Andy Cornelison and Shawn Kelii.

“There was a lot of talent, a lot of power —  even our subs were hitting home runs,” Foster said. “We played really solid defense and we had a deep pitching staff. I’ve always felt lucky to play with a great group of guys like that. We also had a tough head coach in Jeff Safrit. He demanded our best and got the most out of everybody.”

So did Safrit’s assistant, a young go-getter named Chris Cauble.

Foster also excelled for the Rowan County American Legion team. His 100 runs scored and 48 steals put him on the career all-time lists in those categories.

You would think college coaches would’ve been beating down Foster’s door, but that wasn’t the case. Finally, Wingate got interested, and that was big. When Foster was a senior at East, Wingate was ranked No. 1 in the country in Division II and was on its way to a 46-win season under coach Bill Nash.

Foster remembers going to Wingate for a visit and watching the Bulldogs launch eight homers in a hurry. He knew that’s where he wanted to go —  and Wingate offered.

“Coach Nash gave me an opportunity,” Foster said. “I’ll always be grateful for that. Wingate had great players returning in 1996 in center field and right field, but left field was wide open, and I set my sights on being the starting left fielder as a freshman. We hit a lot in the cages before the 1996 season started, and from what I could see, I felt like I had a good chance to start.”

Foster did start and he had a remarkable freshman season.  He was the South Atlantic Conference Freshman of the Year and helped Wingate win the SAC regular season and tournament titles.  Foster hit .365  with 16 doubles and 44 RBIs and the Bulldogs were in the D-II playoffs.

“I went from leadoff man in high school to batting third or fourth in college, and that’s very unusual,” Foster said. “I kind of lucked out. Everything fell into place. A couple of the veteran players from Rowan County, Kris Huffman and Tim Still, really helped me out down there.”

As far as team accomplishments, that freshman year was the peak for Foster. Wingate never got back to powerhouse status or the D-II playoffs during his time there.

Foster slumped a bit to second team All-SAC as a sophomore, but he came back strong as a junior with eight homers, 17 doubles, 53 runs scored and 37 RBIs.

Then he had a fantastic senior season that earned him All-America honors for the first time and All-SAC first team honors for the third time. He batted .422 with 20 doubles, 15 homers, 65 runs and 64 RBIs.

“We could always hit, and it was always a good group of guys,” Foster said. “But we didn’t do as well as we should have.”

After graduating in 1999, Foster eventually made it back to Rowan County, quietly going to work in the contracting and housebuilding industries.

As the years passed, he watched some former teammates enter the Wingate Hall of Fame, but 15 years or so after graduation, he stopped worrying about his own chances.

He was never forgotten though, mostly because Nash, his former baseball coach, is now an assistant athletic director whose duties include chairing the Wingate Sports Hall of Fame committee.

“One day I got a call out of the blue from Coach Nash, but I was building a house and forgot to call him back for a while,” Foster said. “But when I did call, he said, ‘I want to be the first to congratulate you.’ It was a little bit of a shock. I hadn’t thought about the Hall of Fame in years.”

Foster was inducted on Hall of Fame weekend at Wingate. Ceremonies were held on Friday, Oct. 19. Then the new  Hall of Famers were introduced at halftime of the football game on Oct. 20 against Mars Hill.

“It was funny because my son, who is 2 and a half,  got loose and came running out to join me on the field,” Foster said.  “I asked if anything like that had ever happened before, and they assured me that it hadn’t. They joked that I’d just set another record.”

Foster was amazed at how Wingate has grown since his last visit.

“I thought it was really nice when I went there, but it was a dump compared to what it looks like now,” Foster said. “It’s a beautiful place.”

Foster got married five years ago. The healthy arrival of his second son in November reinforced his belief that he’s lived a charmed life, filled with fine accomplishments, great memories and a promising future.

“When you turn 30, you realize how dumb you were at 20, and now that I’m 40, I realize I wasn’t all that smart at 30,” Foster said. “But I’ve been blessed to be surrounded by great people in my life.  I’m thankful for everything.”