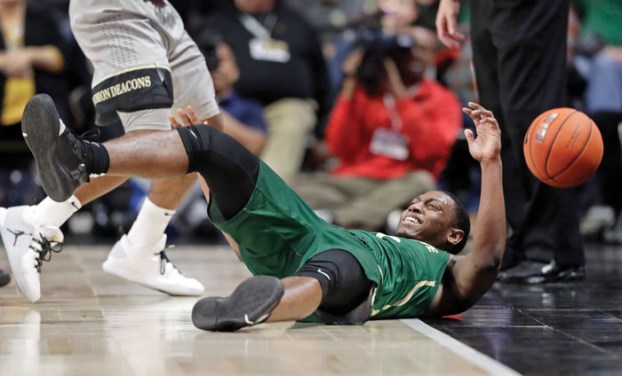 Charlotte's Jaylan McGill loses the ball as he falls out of bounds against Wake Forest in the first half of an NCAA college basketball game in Winston-Salem, N.C., Thursday, Dec. 6, 2018. (AP Photo/Chuck Burton)

Deacons breeze past the 49ers 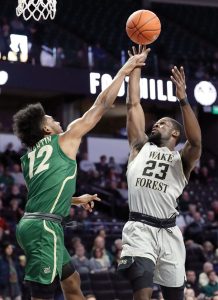 WINSTON-SALEM (AP) — Olivier Sarr soared for a dunk, only to send the ball off the back iron — and it still somehow fell through the rim.

Those kinds of bounces haven’t exactly gone Wake Forest’s way so far. Maybe this was a sign things are changing.

The Demon Deacons beat Charlotte 80-56 on Thursday night behind 16 points from Isaiah Mucius and a career-high 14 plus nine rebounds for Sarr.

Chaundee Brown also had 14, Brandon Childress scored 13 and Jaylen Hoard finished with 12 for the Demon Deacons (5-3). They shot 44 percent and built a 43-31 rebounding advantage to snap out of a slump of two dispiriting losses to mid-major programs in three games.

Jon Davis scored 21 points and freshman Brandon Younger added a season-best 11 for Charlotte (2-5), which lost its second straight. The 49ers hit a season-low three 3-pointers and had 12 of their 15 turnovers during the first half — when they fell behind by double figures to stay.

Wake Forest pushed its lead into the 20s with a 16-5 run early in the half keyed by three consecutive buckets from Hoard, after Manning said his star freshman vomited on the court during pregame warmups.

The Demon Deacons went up 50-29 on Sarr’s dunk — at least, the statisticians gave him credit for one — and Charlotte never got closer than 17 after that.

Charlotte: The 49ers are going to be a work in progress with three freshmen and a sophomore in the starting lineup and seven scholarship players available in this one for first-year coach Ron Sanchez. They needed big performances from both Davis and their other double-figure scorer — Malik Martin, who was held to three points on 1-of-10 shooting — to threaten to pull off a second victory over a power-conference program after stunning Oklahoma State in their second game.

“Remember this feeling,” Sanchez said he told his team afterward, “because the only way you don’t feel this way (again) is if you are willing to do really hard things. … That’s for each and every one of us, to look at the man in the mirror.”

Wake Forest: This was something to build on for the Demon Deacons, whose previous three games included losses at home to Houston Baptist and at Richmond sandwiched by a less-than-inspiring victory over Western Carolina. They had five double-figure scorers for the first time since the opener against North Carolina A&T.

Mucius’ best games have been his last two. The freshman finished one point off the season high of 17 points he set in the loss at Richmond five nights earlier. He’s made 12 of 19 shots over his last two games after making just 2 of 9 in the two games before that.

“He likes to shoot — he’s not bashful,” Manning said. “But you know what, he’s shooting the ball at a high clip. He plays with energy, he scores on all three levels and for us, I love his energy because he brings something to the table every day with that energy.”

Neither team distinguished itself from behind the 3-point line. The 49ers were just 3 of 18 for a season-worst 17 percent, while Wake Forest’s 29 percent was its second-worst showing — better than only its 20 percent showing against Western Carolina. Both teams missed 11 of their first 12 attempts from long range.

Charlotte’s 15 turnovers were its most in a loss this season. The 49ers’ two most turnover-prone games were their victories — against Oklahoma State (22) and Longwood (17).