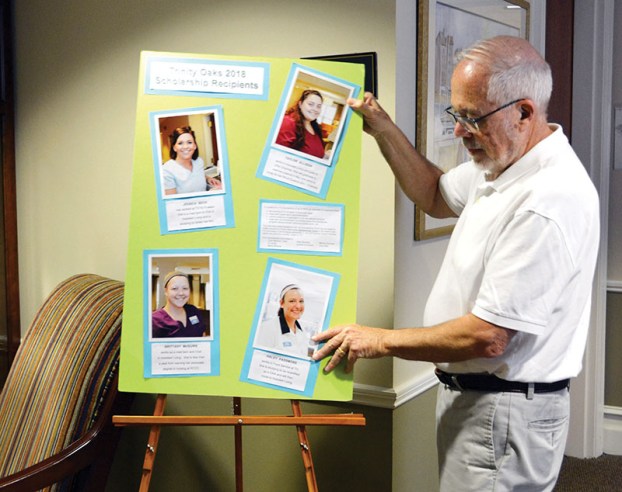 Barry Whenal adjusts a poster his wife made of the Trinity Oaks scholarship recipients to build awareness for the program. Photo by Susan Shinn Turner, for the Salisbury Post.

SALISBURY — There’s a no tipping rule at Trinity Oaks Retirement Community, but residents there still wanted to show their appreciation to the staff.

In 2003, the residents started awarding scholarships to staff members who wanted to further their education. That could be in nursing, criminal justice or business, or another area of study. Over the years, some 20 scholarships have been given.

The scholarships are renewable each semester, and consist of $500 toward tuition, plus a $100 stipend for books and other supplies. Recipients must work at least 15 hours a week at the retirement community, and have been on staff for at least six months.

“If you’re a nurse, you’re going to need uniforms and shoes, and so forth,” says Connie Hurlocker, a scholarship committee member, of the stipend. Others on the committee, chaired by Char Molrine, include Allen Brantley, Marsha Bremser, Al Carter, Russie Hattaway, Judy Moll and Barry Whenal.

Most scholarships are given to employees in assisted living or food service, although those in other departments are eligible, Whenal says. “The money can be used for workshops or other training. We rely on supervisors, who make written recommendations.”

The committee members understand that it takes a special person to work with senior populations.

“It takes a sense of humor and patience,” Molrine says.

The committee is divided equally between independent living residents of the cottages and the Lodge — the main building that residents have always called “The Big House.”

The committee raises money for scholarships by hosting special events. They sponsored a back-to-school dinner for cottage residents in September. Residents from each of the apartment floors also gathered in the fall for a fundraising dinner. In June, the committee will host an in-house bridge tournament to raise money. Doris Clevenger will lead that effort.

The committee also raises money by encouraging residents to give to the scholarship fund in memory and honor of loved ones.

Whenal’s wife, Barbara, has made posters of the most recent scholarship recipients, and they’ve been placed in different areas of the Lodge to build awareness of the program.

Bill Johnson, executive director of Trinity Rowan Senior Services, says that the program is totally run by residents, and it has helped many employees who would not otherwise have a chance to further their education.

Scholarship recipients for the fall semester have included Haley Passmore, who works in the dining room, and Taylor Allison, Brittany McGuire, and Jessica Beck, who work in assisted living.

Passmore has been on staff since April.

“I like working here,” she says. “My favorite thing about my job, honestly, is the residents. They’re like a family. I don’t have much extended family here.”

Passmore, the mother of two children, is taking a CNA refresher course. She’ll complete the course in February, then take two state tests. She’s been offered a job in assisted living once her certification is complete.

“I would not be able to go back and do the class without the scholarship helping me,” she notes.

She adds, “Char is the person who told me about the scholarship. She and the committee are trying to make a good thing happen, and I think that’s awesome.”

If you’d like to know more about the Trinity Oaks Scholarship Fund, please call Trinity Oaks at 704-633-1002.

The Rockwell Museum Festival of Trees and Christmas village is in final preparations before opening Friday evening. The opening will... read more