Rowan County and the surrounding areas prepare for winter storm 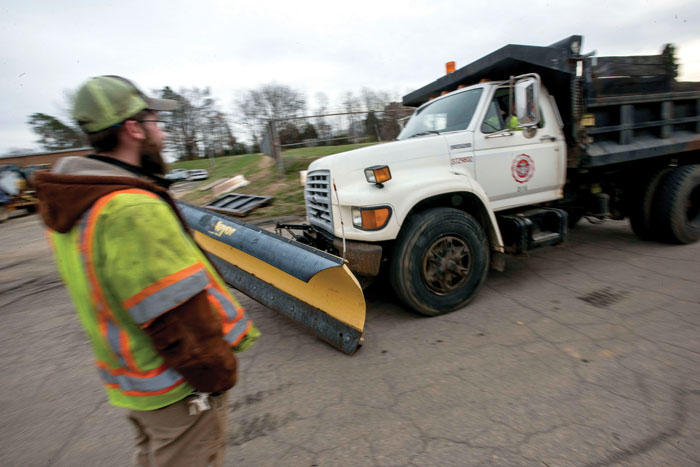 Crew leader Chris Hardin watches as a city dump truck returns from refueling in preparation for the upcoming snow event. The City of Salisbury Public Works Department was busy on Friday setting up their equipment in preparation of upcoming winter storm that has the potential of dropping 8 inches of snow and other frozen precipitation over the weekend. JON C. LAKEY / SALISBURY POST

Rowan County and the surrounding region are preparing for a winter storm that will dump an uncertain amount of snow and rain. According to Rowan County Maintenance Engineer Mike Hedrick, they worked for much of Friday and will continue Saturday morning to ensure safe roads.

“We’ll finish up the salt brine and put plows and spreaders on the trucks at the yard,” he said.

He said crews worked in areas throughout the county including U.S. 29 up to the Davidson County line. He said, unfortunately, an area along Interstate 85 won’t open up until early Saturday because of construction.

“They are changing over the last section of the new inside lanes of I-85. It’s opening tonight. We have to wait until tomorrow to hit northbound up to Old Beatty Ford Road to Mount Hope Church Road,” Hedrick said.

He said the plan is to come in on Saturday morning once the lane change over is complete, which will be about 8 a.m.

The National Weather Service office in Greenville, S.C., reports there will be a slight chance of snow between 8 a.m. and 10 a.m., then a chance of rain.

Residents should expect it to be cloudy, with a high near 41 with a calm wind becoming northeast around 6 mph Saturday morning. Meteorologists say there is little or no snow accumulation expected on Saturday morning, but there will be a chance of rain before midnight and snow likely.

Experts say Saturday night residents should expect a possible accumulation of 2 to 4 inches. On Sunday, the National Weather Service says there will be snow and sleet with all sleet after 4 p.m.

AAA Carolinas urges motorists to be prepared, if they have to venture out.

“With the threat of snow, sleet and ice throughout the Carolinas, we want to remind everyone to practice safety and be extra vigilant behind the wheel,” said Tiffany Wright, AAA Carolinas spokesperson. “Stay home. If you really don’t have to go out, don’t. Even if you can drive well in the snow, not everyone else can.”

• Never warm up a vehicle in an enclosed area, such as a garage.

• Keep your gas tank at least half full to avoid gas line freeze-up.

• If possible, avoid using your parking brake in cold, rainy and snowy weather.

• Do not use cruise control when driving on any slippery surface (wet, ice, sand).

• Always look and steer where you want to go.

• Use your seat belt at all times in your vehicle.

AAA Carolinas recommends the following for driving in the snow:
• Accelerate and decelerate slowly. Applying the gas slowly to accelerate is the best method for regaining traction and avoiding skids. Don’t try to get moving in a hurry. And take time to slow down for a stoplight. Remember: it takes longer to slow down on icy roads.

• Drive slowly. Everything takes longer on snow-covered roads. Accelerating, stopping, turning — nothing happens as quickly as on dry pavement.

• The normal dry pavement following distance of three to four seconds should be increased to eight to ten seconds. This increased margin of safety will provide the longer distance needed to stop.

• Know your brakes. Keep the heel of your foot on the floor and use the ball of your foot to apply firm, steady pressure on the brake pedal.

• Don’t stop if you can avoid it. There’s a big difference in the amount of inertia it takes to start moving from a full stop versus how much it takes to get moving while still rolling. If you can slow down enough to keep rolling until a traffic light changes, do it.

• Don’t stop going up a hill. There is nothing worse than trying to get moving up a hill on an icy road.

AAA Carolinas recommends the following tips for preparing for a trip in bad conditions and what to do if you become snow-bound:
• Watch weather reports prior to a long-distance drive or before driving in isolated areas. Delay trips when especially bad weather is expected. If you must leave, let others know your route, destination and estimated time of arrival.

• Always make sure your vehicle is in peak operating condition by having it inspected at a respected auto repair facility — such as AAA’s approved facilities.

• Keep at least half a tank of gasoline in your vehicle at all times.

• Pack a cellular telephone with your local AAA’s number, plus blankets, gloves, hats, food, water and any needed medication in your vehicle.

• If you become snow-bound, stay with your vehicle. It provides temporary shelter and makes it easier for rescuers to locate you. Don’t try to walk in a severe storm. It’s easy to lose sight of your vehicle in blowing snow and become lost. Don’t overexert yourself by trying to push or dig your vehicle out of the snow.

• Tie a brightly colored cloth to the antenna or place a cloth at the top of a rolled up window to signal distress. At night, keep the dome light on if possible. It only uses a small amount of electricity and will make it easier for rescuers to find you.

• Make sure the exhaust pipe isn’t clogged with snow, ice or mud. A blocked exhaust could cause deadly carbon monoxide gas to leak into the passenger compartment with the engine running.

• Use whatever is available to insulate your body from the cold. This could include floor mats, newspapers or paper maps.

• If possible, run the engine and heater just long enough to remove the chill and still conserve gasoline.