Remember the Chiefs as Atlanta United goes for MLS title 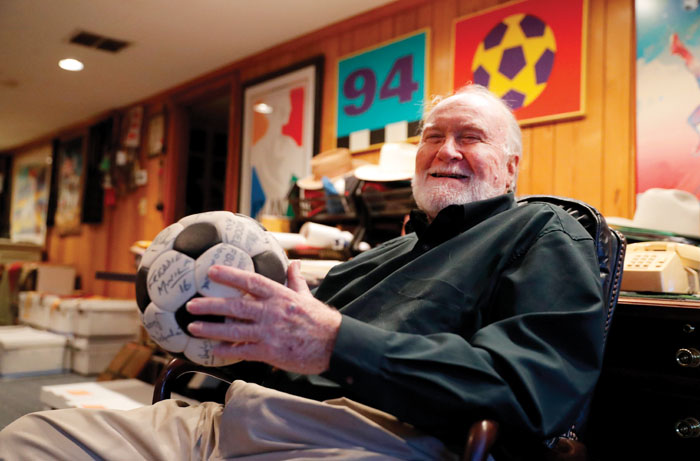 Dick Cecil, vice president and chief architect of the Atlanta Chiefs soccer club, holds a ball signed by the 1968 championship team at his home in Atlanta, Wednesday, Dec. 5, 2018. Cecil still has the championship trophy, tucked away somewhere in his home, a cherished prize that has been reduced to bits and pieces by the ravages of time. (AP Photo/John Bazemore)

ATLANTA (AP) — Dick Cecil still has the championship trophy, tucked away somewhere in his home, a cherished prize that has been reduced to bits and pieces by the ravages of time.

He’d like to get it fixed up, maybe give it a place of honor at Manuel’s Tavern, a famed Atlanta watering hole.

“It needs to be on display,” Cecil says.

When Atlanta United takes the field in Saturday night’s MLS Cup championship game, you’ll hear a lot of talk about this city — once dubbed “Loserville USA” — seeking only its second major league sports crown. They’ll point to the 1995 Atlanta Braves as the only barrier to a total title blackout in a place that has known far more agony than triumph.

Fifty years ago, in a fitting bit of symmetry, an upstart soccer team in a fledgling league gave an up-and-coming city a reason to cheer. The Chiefs won the very first title in the North American Soccer League, beating the San Diego Toros 3-0 before a crowd of about 15,000 at Atlanta Stadium.

When it ended, those fans — small in number, but eager to celebrate — stormed the field.

Afterward, there were champagne toasts in the locker room.

And then? Well, that’s about it.

“A lot of people back in 1968 thought God did not intend Southerners to play soccer,” said Bob Hope, who was the Chiefs’ right-out-of-college public relations director.

Cecil, the team’s vice president and chief architect, still has some team memorabilia in a small building behind his house, which serves as his office and a de facto museum of Atlanta sports history.

He shows off a ball signed by all the Chiefs players, their signatures still as legible as the day they put pen to synthetic leather. He still has a gold medal awarded to the champions by the league office (“We bought all the players rings, but they really just wanted a medal,” Cecil says, chuckling at the cultural divide between American-based sports and the rest of the world. “I doubt anyone ever wore one of those rings.”)

Cecil also has a picture of a bunch of smiling young men posing behind their trophy (still intact) on that glorious September night in 1968, when Atlanta was on top of the American soccer world, whatever that was worth at the time.

“Let me put it this way,” says John Cocking, a Chiefs defender who left his native England to take a chance on something new. “As an athlete, performing in a league with players from all over the world, to go through and end up winning it all, whether you’re playing in front of one spectator or 100,000 spectators, a  player’s feeling is very much the same. You had success against your peers. That’s what the game is all about.”

It’s certainly worth noting the seed planted by the Chiefs all those years ago. It wasn’t readily apparent in the stands — the team, in two different incarnations covering a total of 10 years, never averaged as many as 8,000 fans per game — but it took root in all the high schools that added soccer as a varsity sport, all the youth leagues that sprouted up around metro Atlanta.

“Suddenly, you would drive around Atlanta, particularly in the suburbs, and see soccer games cropping up,” Hope recalled. “None of that existed before.”

Still, the second version of the Chiefs folded after the 1981 season, followed just a few years later by the demise of the entire NASL. After that, Atlanta went without a big-time soccer team for more than three-and-half decades.

Then, Atlanta United joined Major League Soccer in 2017 as an expansion team — and quickly became its greatest success story . United has shattered basically every MLS attendance record, averaging more than 53,000 per game this season to rank as one of the best-supported clubs in the world. A crowd of more than 70,000 is expected for the title game against the Portland Timbers. The fans are young, hip and extremely diverse, turning Mercedes-Benz Stadium into a singing, chanting, flag-waving spectacle that wouldn’t look out of place in the Premier League or La Liga.

“We went to one of the first home games this year,” said Jane Cocking, John’s wife. “When we came up the stadium escalators into the plaza area around the stadium, there were thousands of fans. The supporters’ band, they were playing. Everyone was cheering. I just started boo-hooing. … This is what we dreamt of.”

Cecil was an executive in the Braves front office when the baseball team moved from Milwaukee to Atlanta in 1966, giving the city its first major league team (the Falcons would make it two later that year, joining the NFL as an expansion team). The Chiefs were hastily launched in 1967, joining one of two new leagues that were founded in North America to cash in on soccer’s rising popularity after England captured the World Cup.

Of course, it didn’t take long to realize just how tough it would be to sell the sport on this side of the Atlantic. Five franchises folded, several moved to new cities and the two leagues merged into the 17-team NASL.

After a mediocre debut, the Chiefs blossomed into one of the better teams in Year 2. They even gained a bit of worldwide notoriety by winning a pair of exhibition games with Manchester City, which was coming off a championship in England’s top division.

Cecil gleefully pulls out a book about the history of the NASL.

“Look at the title of the first chapter,” he says.

I thumb quickly to the table of contents.

“Atlanta, Champions of England,” it says.

“I love that!” Cecil says, erupting in a laugh pulled straight from the belly.

More than 23,000 turned out for the first match, a 3-2 victory for the Chiefs. In all fairness, Man City was coming off a long season and didn’t bring along many of its top players. Still, the loss was clearly galling for Man City, which quickly adjusted its schedule to set up a rematch in Atlanta about three weeks later while on the way back to England. The team even sent for some additional players to bolster the roster.

But the Chiefs prevailed again , 2-1, to the delight of nearly 26,000 fans who watched a game that was played on a pitch that included part of the dirt infield required by the Braves.

There won’t be any dirt infields when Atlanta United goes for a title at Mercedes-Benz Stadium.  But John and Jane Cocking will be there.

Their sons purchased tickets as an early Christmas present.

The city plans to hold a parade if United wins Saturday night. Maybe the Chiefs can come along for the ride.

“I feel very proud of the job we did,” John Cocking said. “When I see what’s happening today, it makes me even more proud. We were the pioneers. Even though it was small compared to what it is now, it was a beginning.”

Paul Newberry is a sports columnist for The Associated Press. Write to him at pnewberry@ap.org or at www.twitter.com/pnewberry1963 . His work can be found at https://apnews.com/search/paul%20newberry