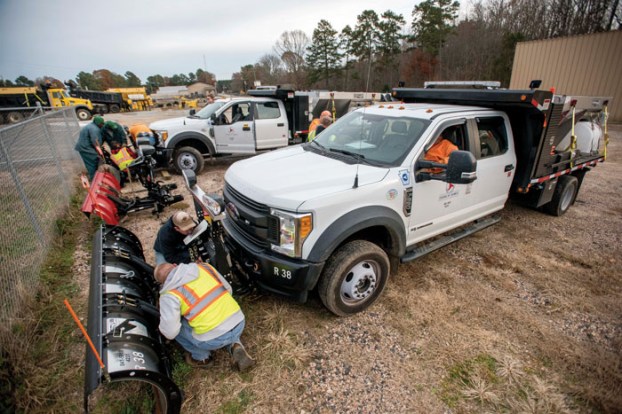 JON C. LAKEY / SALISBURY POST The Rowan NCDOT yard is adding to the number of plows on the road by utilizing the smaller crew trucks outfitted with plows and salt spreaders. The NCDOT's County Maintenance Yard for Rowan County on Camp Road was a hustle of activity as crews transitioned from applying liquid brine to the roadways into the setting up trucks with plows and traditional salt spreading. SALISBURY, North Carolina 12/7/18

SALISBURY — Friday was the day of attaching equipment, ensuring plows and brine spreader are working correctly and making brine at N.C. Department of Transportation for the winter weather expect this weekend.

All hands will be on deck Sunday at midnight with about 25 trucks and 6 motor graters and other contractors. The priority is to remove winter precipitation off of Interstate 85 and U.S. 70 and 52, then concentrate on N.C. highways and heavily travelled roads like Faith Road.

The DOT county maintenance engineer Mike Hedrick said they give themselves a goal of 48 hours to get bare pavement routes cleared. He said the public generally demands to get the roads to be cleared as fast as possible. He said looking at the weather forecasts it won’t be an easy cleanup.

“This look like its going to take a while,” Hedrick said.

Hedrick said they are at Mother Nature’s mercy. The main concern for him is potentially melting and refreezing overnight on Tuesday.

He said the preparation takes as much work as clearing the roads. For this storm, they have some new equipment, like tanks and Ford F-550 trucks plowing. They also have a new driver for the tow plow, Francis Lusk. It can plow three lanes of highway at a time with a front of truck plow and a trailer that can swing to the side.

Hedrick said there is a mix of excitement and ready for it to be over at the N.C. DOT. They have the ability to house workers that may get stuck with a building with cots and shower.

“They’ll go until they drop,” he said.

Hendrix said one of the biggest challenges for the plows is immovable objects, railroads tracks, manholes, grates and end of aisles.